Starting next Tuesday, June 9, Tor is releasing electronically the four novellas that comprise The End of All Things, once a week through June. The first of these is “The Life of The Mind,” and to get you excited about what’s to come, Tor.com has an excerpt from the story up on the site. Go on, you know you want to peek!

You may also, you know, pre-order “The Life of the Mind” as well as the other three novellas, at your favorite ebook retailer. Prefer to wait for the entire book, which comes out August 11? You may pre-order that too, online or at your favorite local bookseller. Want that book signed? Subterranean Press is taking pre-orders and if you order through them the book will be scribbled upon by me. And yes, there will be an audiobook version as well. We’re all about options, here.

Expect me to be talking more about the novellas (and the novel!) all this month. I’m super excited to share it all with you. 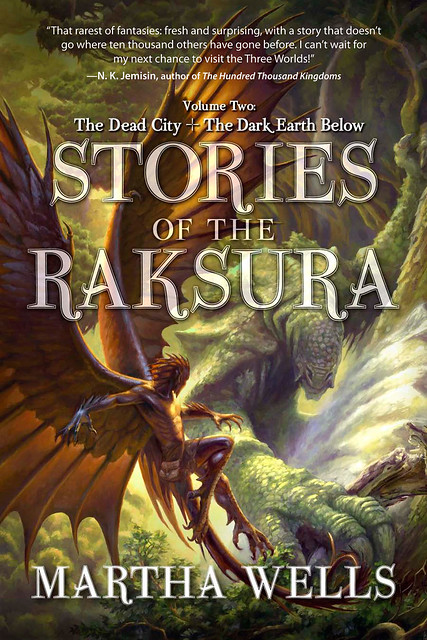 Writers sometimes take the long way around to find “home” — the world and characters where they find the most stories to tell. Martha Wells has found her home with the world she’s created in Stories of the Raksura, Volume Two. Here’s how she found it.

In many ways, the Raksura books are the books I’ve always wanted to write, it just took me writing a bunch of other books to figure it out.

I always wanted to be a writer, from the time I was a weird, lonely little kid in elementary school haunting the public library and writing and illustrating (in crayon) my Godzilla fanfiction. I’ve always been drawn to fantasy that was outside the marketing box, maybe because my first experience with the genre was weird horror comic books and the pulp paperbacks the library had stuffed into the back corner. I never liked imaginary worlds that had boundaries. I never wanted the characters to know what was on the other side of the mountains or the sea; I wanted to think there was a whole planet out there to explore. (Preferably a planet with multiple moons, maybe rings, and some unlikely microclimates.)

I liked Tolkien, but I loved Andre Norton better, her fantasy and her space opera and the way she combined them, psychic powers that were almost like magic and magic that was almost like technology. I loved the way she would start out with the characters in a strange world and then take them somewhere else even stranger. I wanted to write stories that captured that feeling.

With the Raksura books, I think I finally got there. I’ve tried to create a world that feels limitless, that has room for any amount of stories, where anything could happen. And where I could write about anything, say, matriarchal bisexual shapeshifting flying lizard people, to my heart’s content. It’s a world with a huge variety of strange species, and there’s lots of adventure, exploration, ancient ruins, cultural conflict, assigning blame, fighting, running for their lives, flying for their lives, and trying not to get eaten.

Besides the adventure aspects, the books are also about finding a family, even if it’s a huge, sometimes dysfunctional family, and fighting to keep it together against all odds. (Because the weird lonely little kid I used to be really loved those kinds of stories.) They’re about trying to find a place to call home, learning to trust, and learning to cope with your past, and what happens after you find the thing you’ve always been looking for. It just happens that all this takes place with characters who are, you know, matriarchal bisexual shapeshifting flying lizard people.

Hopefully, readers will find this world almost as much fun to read about as I do to write about it, and I’ll be able to keep expanding it in the future.