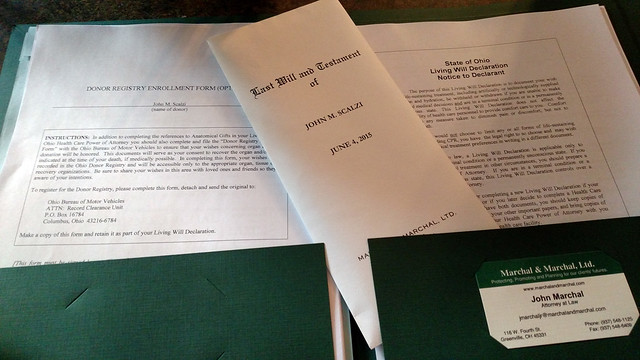 Today my wife and I went into our lawyer’s office and updated our everything, including wills, living wills, donor registries and so on. Why did we do this? Because at this point in our life we have a fair number of assets, and given my recent deal, it’s likely we’ll have more in the future. Moreover, as a creative person, I have a considerable amount of intellectual property, which will need to be attended to if something should happen to me. If Krissy and I didn’t specify what was to become of all of that, it would be up to the state to deal with it. No offense to the state, but I don’t know it all that well. So Krissy and I have made sure that our own wishes for everything are in legal documents and up to date. Now there is no confusion about our wishes.

I frequently harangue writers and other creative types about financial issues, so allow me to do it again here: Creative folks, you must do some estate planning. You have assets. You have intellectual property. You (probably) have family or friends that you might want to have benefit from your work after you’re gone — and you might have some people (which may even include family) that you might not want to have a say in what happens to your work when you are dead. If you die — and you will die, one day! — and you have not left direction toward the disposition of your intellectual and real property, then someone else will make those choices for you. As a result, some of the people you would want to benefit might get nothing. Some you don’t want to get anything could get a lot. And in the meantime, it’s all going to be stuck in probate, which is fun for exactly no one.

No, it doesn’t matter if you’re young. Young people die all the time, and creatives are famously prone to bad habits that increase their risks (including, in the US, not carrying health insurance). No, it doesn’t matter that you’re not famous or that your work doesn’t have wide circulation. There are tons of artists who became far more famous (and rich!) after their death than before it. In my field, a fine example of this is Philip K. Dick, who struggled financially in life and has become a multi-millionaire in death as his stories have been turned into successful films.

And yes, it does matter to your legacy if you don’t give direction for what happens to your work after you die. Academic James Boyle notes that something like 95% of all copyrighted material since 1900 is “orphaned” — that is to say, material for which there is no clear owner (either an estate or designated individual), and so cannot be legally reproduced. If you want your work to be legally available after you die, the best thing you can do is leave clear instruction as to what or whom owns the rights (including, if you so desire, giving the work a Creative Commons license until it makes it into the public domain a ridiculously long time after you are dead).

Beyond that, I know personally writers who have died and whose families have decided to withdraw all of that writer’s work from the public sphere, forbidding reproduction or republication. In the particular case I’m thinking of, it’s almost impossible that this choice is what the writer would have wanted. But the writer never said in life what they wanted to have happen to the work, and therefore in death no longer has a say.

This is important stuff, people. I can’t stress this enough. And yes, it costs money, and yes, it takes time, and yes, you might think it doesn’t matter. But it’s worth the time and money, and if you believe your choices about your work matter while you’re alive, there’s no reason that they shouldn’t matter after you are gone. And if you have people you love and care about, whom you wish to see benefit from what you’ve created, then it’s smart — and kind — to make a document that makes your wishes clear and spares them the pain, aggravation and expense of having to deal with your lack of planning while you were alive.

So: The Scalzi Estate is now updated and planned for. Is yours? If the answer is “no,” ask yourself why not. And ask yourself if there is anyone in the world for whom a little bit of planning on your part would make their lives easier if and when you go. And then, go take care of this stuff. It matters.