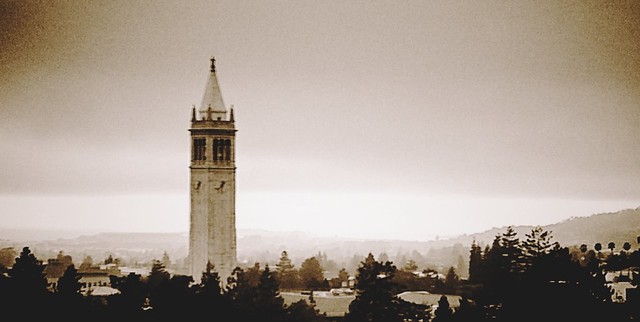 * I spent the weekend in Berkeley, California for the inaugural Bay Area Book Festival, and in my opinion the folks running it did pretty well for the first shot at the event. There were a few hiccups here and there, but by and large people seemed to enjoy themselves, and I’m happy to say my events were well-attended. My first event was a reading and Q&A, followed by a panel on climate change and fiction, which also included Paolo Bacigalupi, Edan Lepucki and Antti Tuomainen. I also got to see several friends there, which is always a joy, and on Saturday evening got to hang out with a bunch of writers, including Paolo, Kim Stanley Robinson and Karen Joy Fowler, discussing writing and publishing. It was a pretty nifty time, in short, and enough so that I didn’t mind several hours in the air, both ways, to be in the Bay Area less than 48 hours overall.

The picture above, incidentally, taken from the balcony of the University Club at the top of Memorial Stadium, where the book festival held a welcoming party for writers. It was a lovely time; I hung out with my friend Olivia Ahl (events coordinator for the Bellevue branch of the University Bookstore (that’s University of Washington, not Cal)), author Suzanne Young, and Wired editor Adam Rogers. I also met Otis Chandler, CEO of Goodreads, who also happens to be a fellow alumni of my high school, the Webb Schools of California (he graduated a few years later than I) and his wife Elizabeth. Otis and I talked obscure high school lore whilst everyone about us looked on tolerantly.

In any event, I thought the Bay Area Book Festival was a success, and can’t wait for future installments.

* Over the weekend I also ran a fundraiser for Con or Bust, in which I invited folks to post a picture of a happy puppy, and for every picture I would donate $1. As a result we got to see about three hundred different doggies in the thread, either pictured or linked to, which makes it arguably the most adorable comment thread in the history of Whatever. In the end there were 317 comments, some of which were repeats as people tried alternate methods to post pictures of their pups, but eh, I rounded up and donated $325 to Con or Bust. The donation is now already sent off, so well done, everybody. You and your puppies can be proud. Also, if you yourself are looking to donate to a worthy cause, consider Con or Bust. It’s pretty cool.

* On a (very) tangentially related note, Jim Hines did some yeoman work over the weekend doing a quick early history of the Sad Puppies, using their own words to help make the picture more clear for the confused, which at this point could be everyone. Jim somewhat mercifully skates over the part where Theodore Beale makes the Sad Puppies his arguably unwitting tools for his own purposes (i.e., the “Rabid Puppies” slate, aka the “Let me just use the Hugos to promote my own little not terribly successful publishing house here” slate), but it’s otherwise pretty comprehensive, and a good primer.

It’s not escaped notice that I’ve been slacking on my Hugo/Puppies commentary recently, but honestly at this point there’s not anything new for me to say. It’s a low-information movement begun in craven entitlement, with a political element tacked on as a cudgel, taken over by an ambitious bigot, and I’m sorry for the several excellent people I know who have gotten wrapped up in this nonsense one way or another. That’s pretty much where I’ve been on it for a while now. When I have anything new and useful to add, I’ll make note of it.

* So that we won’t go out on a low note, and to usher in Monday, may I present the following exchange between me and Chuck Wendig on Twitter, which to my mind amply explains why Twitter does and should exist:

It immediately begins to rain on me.#monday

@ChuckWendig It's your fault.

@scalzi MONDAY IS YOUR CHILD TOO by the way you owe paternity.

@ChuckWendig (Tosses some trail mix at Monday) There, I'm paid up.

@ChuckWendig Case law supports me. The Trail Mix Defense has been around for decades. DECADES, CHUCK

You're repped by three squirrels in tiny business suits?

@ChuckWendig Your implicit bias against squirrel lawyers sickens me, Chuck. And their business suits are NOT tiny, relatively speaking.

@scalzi … are you just a sack of squirrels wearing a John Scalzi costume? Be honest.

@ChuckWendig Of course not.
(opens trench coat)
(is revealed to be several hundred chipmunks)
CHIPMUNKS ARE TOTALLY DIFFERENT CHUCK

@scalzi The good news, and I'm trying to focus on that, is that you have finally ended the Squirrel-Munk War that's been raging for years.

@ChuckWendig All we needed was a common enemy. It's you. SLEEP WELL, SIR

@scalzi Thanks, I will! … WAIT THAT WASN'T AN HONEST ENTREATY TO SLEEP WELL YOU CHIPMUNK BASTARD

And off we go into the week!