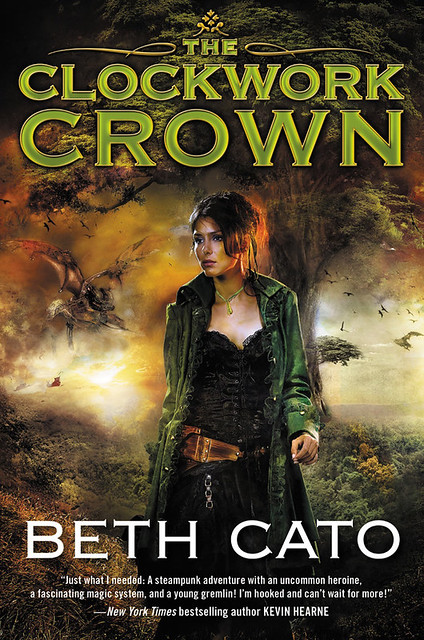 In today’s Big Idea, Beth Cato challenges tradition in The Clockwork Crown, and creates a character that the rule books don’t ever seem to suggest can actually exist.

The Big Idea behind The Clockwork Dagger series is pretty straightforward: healers are heroes too, darnit. Not just sidekicks, but full-on protagonists.

I grew up on old school role-playing video games. In order to survive games like Final Fantasy or Dragon Warrior III, you needed a white mage, a cleric, some kind of magic user with healing power. They enabled your party to stay alive… if you could keep them alive. Because let’s face it, a white mage had the offensive and defensive skills of a paper bag. One solid thwack and they keeled over. You needed strong fighters up front to take the worst of the damage.

That’s the usual way of things with healers in games, whether the medium is 8-bit, Playstation, or MMORG. Healers are sidekicks. They buff the Big Damn Heroes and then cower in the back row.

Fantasy novels pretty much follow the same pattern. If the hero has some healing skills, it’s part of a demi-god prize pack of superpowers. It’s not their primary trait.

I searched for years for books that made healers into heroes. I didn’t find it, so I wrote it myself. I wanted a heroine who would stand in the middle ground between real world battlefield medics and the grand magical powers of video game clerics. She needed to be a warrior, but one who wielded herbs and compassion.

Since childhood, Octavia has understood that she’s different from most folks and even most medicians (magical doctors). When she’s near other people, she hears their injuries and diseases in the form of song and intuitively knows the right herbs to heal them. Through her magic she can even cause patients to float or create defensive barriers around them. Her heightened skills have made her an outcast among her fellow medicians. Even her mentor has succumbed to jealousy and turned against her.

Octavia’s physical strength is a more noteworthy attribute than her appearance. She can haul hay bales or drag a comatose body. She’s against violence, but if need be, she’ll defend herself. She’ll also rush to heal her assailant afterward.

During the events of the first book, Octavia’s magic changed in new, alarming ways and she realized she could become a deadly tool for the enemy. As the sequel opens, her powers have deepened in a manner that challenges her faith in the source of her power, a world tree known as the Lady. Octavia is on the run for her life as she’s caught in a vicious tug-of-war between terrorists and her own corrupt government. Everywhere she turns, there are assassins, kidnappers, and people who want to exploit her incredible magic.

Octavia is the kind of literary heroine I’ve searched for since my teens. She’s strong, compassionate, and resourceful. You won’t catch her cowering in the back row of battle. She’ll be on the front lines, her satchel at her hip, ready to fight Death one on one. And win.

← The Life of the Mind, Episode One of The End of All Things: Out Now!
A Refresher Course On What I’m Obliged to Write About →