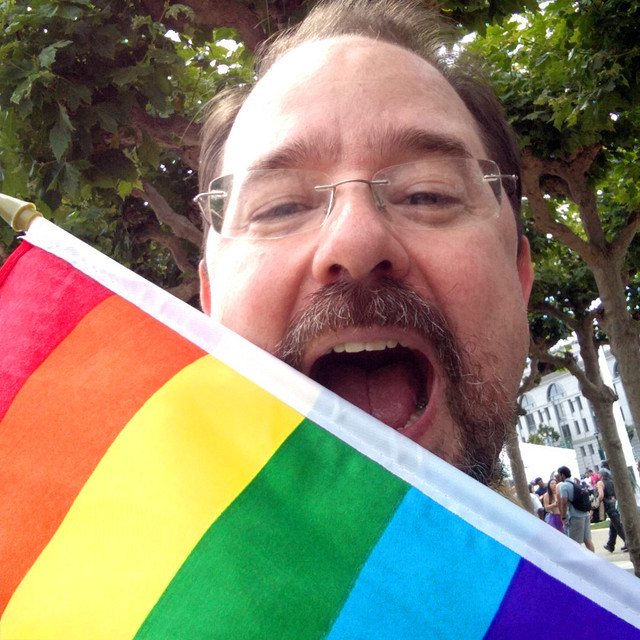 I was in the airport last Friday when the Supreme Court ruling on same-sex marriage came down, and one of the first thoughts I had on that was, “Looks like I picked the right week to go to San Francisco.” And you know what? I was right! The city was, verily, bedecked in rainbow flags and happiness. After my events at ALA on Saturday I went with friends to City Hall, where the pride celebration was in full swing, and watched people being happy, all over the place (plus occasional hippie nudity, because San Francisco). It’s very rare to be in the right place at the right time, when history is actually and genuinely happening around you. But I was, and I was delighted in the happy circumstance that put me there.

I’m even more delighted that my country is now a better place than it was at 9:59am on June 26, when a minority of states still didn’t allow gays and lesbians the simple, basic right of marrying the person whom they loved and wished to spend their life with. Those days are now gone, thankfully, despite a few pockets of resistance, which I don’t suspect will last very long. Texas, as an example, is a place where the Attorney General is telling county clerks they may defy the Supreme Court; it’s also a place where two octogenarian men, together for more than 50 years, became the first same-sex couple to wed in Dallas County. Who do you think history, and Texas, will celebrate more: The two men confirming their decades-long love to each other, or the government official symbolically standing in front of the courthouse door to oppose their right to confirm that love?

Bluntly: Texas Attorney General Ken Paxton is going down in history as a bigot. So will Texas’ governor and lieutenant governor. So will Ted Cruz, Mike Huckabee and all the other politicians (and would-be politicians) who are thumping around now, pretending not to understand what it is that the Supreme Court does, or the legitimacy of its rulings under the Constitution, and pretending that their religion makes that feigned lack of understanding all right. Dan Patrick, the Texas Lieutenant Governor, has said “I would rather be on the wrong side of history than on the wrong side of my faith and my beliefs.” Well, Mr. Patrick, you’re not only definitely on the wrong side of history, but you’re also on the wrong side of your professed faith. Jesus never once said “be a bigot in my name.” If you believe He did, you might want to recheck your Bible. That admonition is not there, although the admonition to love your neighbor as yourself is.

On a related topic, this Time magazine article by Rod Dreher on orthodox Christians being “exiles in our own country” struck me as a bit dramatic. Not being in step with the mainstream of American life and opinion does not make you an exile, especially when you suffer no estrangement under the law. When the mainstream of American life did not include the idea that same-sex marriage was a viable thing, which was an opinion different than mine, I was not in exile in my own country — although same-sex couples may have been, as the law estranged them from the rights they should have had under the Constitution, now affirmed by the Supreme Court. The affirmation of those rights did not and does not take away rights from anyone who believes same-sex marriage is wrong. You may still believe they’re wrong; you just can’t stop those couples from getting legally married. Unless you think it should be your right to deprive others of their rights, everything’s the same for you as it was before. And if you do believe it’s your right to deprive others of their rights, then you’re a bigot, whether you cloak it in religion or not.

I suspect that this is the thing Dreher is really worried about, whether he’s aware of it or not — that the perception of certain religious sects will change from them being depositories of rectitude to cisterns of intolerance. Well, this is a fair concern, isn’t it? Over the last twenty years in particular, nearly every American learned that someone they cared about or even loved — a family member, a friend, a co-worker or neighbor or a person they admired — was not straight, or 100% conforming to society’s ideas of gender. Over the last two decades, Americans decided it was more important to tell those people they still loved them and that they deserved the same rights as everyone else, than it was to listen to those people who said, through their words and actions, that these people we loved represented some sort of threat. Your mom is not a threat to America, if she happens to be gay or bisexual. Nor is your dad. Nor your sibling, or your best friend, or Doug from Accounting or Jillian down the street or Ellen DeGeneres. Who are you going to choose to stand with? Your sister, or some dude at a pulpit demanding we believe the bowels of Hell will empty if she marries her girlfriend? Your sister’s girlfriend is awesome! That guy is a jerk!

Which is the thing: the religious sects terrified that they will now lose their moral standing lost that standing long before, when they said, in so many words, in so many actions, that the people we love and know and know to be good, and their desire to have the same rights as everyone else, are what’s wrong with America. Dreher laments we now live in a “post-Christian” America, but he’s wrong. The Americans who are standing with their loved ones and neighbors are in fact doing exactly what Jesus asked them to do, when he said that we should love each other as we love ourselves. It’s possible, however, that we live in a post-accepting-bigotry-cloaking-itself-in-the-raiments-of-Christ America. And, you know. I can live in that America just fine.

Regardless, the America we do live in now lets anyone person marry any other person who they love. I like this America. I am glad I live in it.

123 Comments on “This New America”