And that’s all you get until it is done. 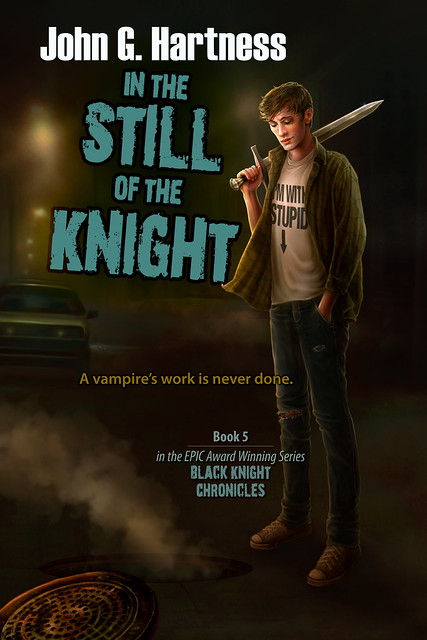 Sometimes the band breaks up and the members go solo — but is the resulting music triumphant or discordant? Ask John Hartness, because in In the Still of the Knight, the latest installment of his Black Knight Chronicles, the band breaks up, so to speak… and the tone changes.

What do you have when you lose everything? Who are you when there’s no one around? Are you as good as you think you are when your support network is gone and it’s all on you?

These are the questions I wanted to play with when I started working on In the Still of the Knight, the fifth book in my Black Knight Chronicles series. Over the first four books I built a pretty solid ensemble of protagonists, a good little team of X-Men (or Avengers, if you prefer), and now it was time to see if I had a Wolverine in the bunch. In other words, it was time to see if my protagonist, Jimmy Black, could stand alone and become the hero he needed to be.

Let’s back this up a little, because there’s some credit due that I need to give. I’m a big Kim Harrison fan. Her Hollows series was the first urban fantasy I read, and it dragged me deep into the genre and never let me go. In one of her books, she does exactly what I’m doing here – she breaks the band up to force her character to stand alone and become stronger. So it’s not like I’m doing anything terribly original. Hell, the WWE is doing the same thing right now with its champion, Seth Rollins. They’ve taken away a lot of his supporting characters to make him become (or appear to become) a stronger villain.

So I wanted to see what would happen if I took everything away from Jimmy. I’ve spent four books giving him a girlfriend, slowly building their relationship through all the troubles a poor vampire nerd has while trying to date a living cop in today’s world. Now I yank that away from him.

I’ve spent four books giving him a best friend that will stand by him through thick and thin, and you know that no matter how much they fight and bicker, these blood-sucking besties will have each other’s backs no matter what. Until Jimmy makes a decision that’s the straw that breaks the camel’s back, and suddenly his best friend isn’t there anymore.

And then I put him into a fight he can’t possibly win, and can’t afford to lose.

All of this to see what kind of character I’d truly crafted. Had I built someone strong enough to stand alone and take up arms against a sea of troubles, and by opposing end them? Or would he be unable to bear his fardles?

Of course, right about the time I really got rolling on the writing of the book, life decided to imitate art and I got far closer to Jimmy Black than I ever wanted to. A series of unfortunate events led me to leave two different jobs over the course of one year, so I spent about half of 2014 unemployed and looking. And let me tell you, unemployed at forty with a theater degree is not where you want to be.

While I was looking for work, and trying to work on the book, I was also dealing with my mother’s declining health. She battled Alzheimer’s and dementia for well over ten years, and at the beginning of last year, her health took a nosedive. On Labor Day, on the last day of DragonCon, I got the call that she had died.

I thought I was ready, but I wasn’t. I guess no matter how it happens, you’re never prepared, no matter how you intellectualize things. I found myself sitting at this computer the day after we buried my mother, staring at a screen and feeling very much like someone had done to me what I was doing to Jimmy Black. I felt like my whole reality had been stripped away, and that all that was left was the raw core of me.

Turns out that raw core can crank out some words. I finished the last 20,000 words in the book the month we buried my mother, and when I finally typed “The End,” I put my head down on the keyboard and wept.

Don’t do that, it types all kind of stupid letters at the end of your manuscript. Much better to close the laptop first.

Last year taught me that if you strip away all the extras, you find out who you really are. In the rewrites and edits of In the Still of the Knight, the amazing Deb Dixon worked with me to do that to this book. I’m pretty sure we’ve done that to this character. Over the course of early 2015, Deb and I took out the parts that were “too much John, not enough Jimmy,” and left me with a deeply personal book that still fits with the series and everything that’s come before.

Jimmy Black and I have run through the fires together, and we’ve come out tempered, hammered, and sharpened. I hope that you enjoy the forging process I put myself and my character through; I think it made a hell of a story.

In the Still of the Knight: Amazon|Barnes & Noble