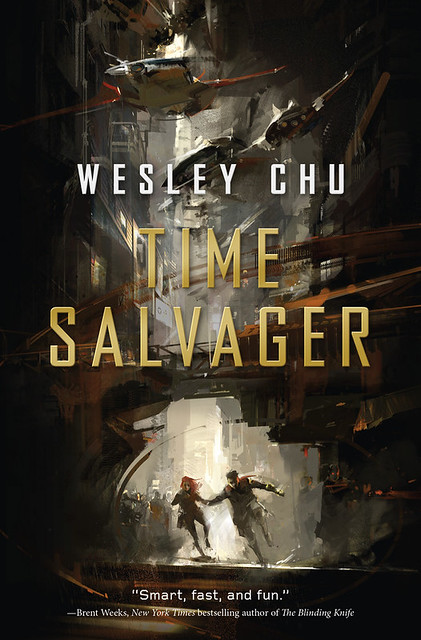 Time Travel! It’s a thing in science fiction. But after all this time, and time-travel stories, what is the thing about time travel that can still make it fresh for readers? In Time Salvager, author Wesley Chu thinks he’s got a wrinkle in time travel. What is it? Read on below.

Remember that classic 80s cartoon Voltron? That was one badass robot. Not the stupid Vehicle Voltron but the real deal Lion Force Voltron with primal roars and shit. The Big Idea for Time Salvager is like that, a bunch of bad ass lions forming Voltron, except there’s only two ideas (instead of five), no sword, and nothing is color coded. I’m Asian, so that has to count for extra Voltron points, right?

Let’s start with the first and obvious idea: time travel. Time travel stories that try to change history need to check themselves. I guarantee you, any scientist, real or fictional, who is developing time travel technology, knows about the butterfly effect and the consequences of changing history. So, why the hell would anyone mess with that? You mess with science, you get the horns. Trust me.

I mean, sure, killing Hitler or preventing Yoko Ono from breaking up the Beatles is all well and good, but have you really thought it through? We’ll give Yoko a pass. News flash, Sir Paul already debunked that little rumor.

Hitler, however, deserves killing. He deserves killing bad. Maybe more than any other asshole in history. We’re on the same page here. But, let’s say some dumb genius invents time travel with the express purpose of killing Hitler. He goes back and whacks twelve year old Adolf walking out of water coloring class.

Yay, Hitler’s dead. What happens next? The scientist doesn’t know. I sure as hell don’t. For all we know, the Third Reich happens anyway and instead of Hitler’s insatiable craving for St. Petersburg, they have a leader who reads a little Napoleonic history, looks at the map, and thinks, “Man, that’s a lot of land to cover. You know what? Maybe attacking Russia is a bad idea.”  Before you know it, we’re seventy years into the Thousand Year Reich. Well done, Mr. Scientist, well done. You just ruined the future for everyone.

So, if changing the past is too dangerous and we’re not here to kill Hitler, what is time traveling good for? Since the 1980s hold the answer to everything, I want you to remember Biff Tannen. He used a Grays Sports Almanac to win a crap-ton of money. Before you get excited, sorry, that counts as changing history. However, Biff had the right idea. The answer to the question is all about profit. How does a time traveler make it rain in the present by plundering the past?

Thankfully, I had one of those trippy Wayne’s World dream sequences. I was a time traveler on the Titanic, tasked with stealing the Hope Diamond. My job was to jump onto the ship, locate the rock, and get out as she was sinking so that any traces of my activities would be washed away (literally) when she went down.

I woke up, thinking, “I need to write this down five minutes ago.”

In a resource-starved dystopian future, what if the past is the primary source for power, technology, and materials? And what if the only way to safely retrieve these resources, without affecting the time line, was to jump back to the moment right before a disaster occurs so that the time traveler’s activities are easily ignored by the space time continuum?

Now, as much I’d love to ice Hitler, making fat stacks is a decent consolation prize. As I delved deeper into time travel profiteering, another idea from the darkest reaches of my psyche also crept to the top. This one wasn’t quite as romantic as Leo painting French girls.

I read an article about a South African photojournalist named Kevin Carter.  He took an iconic photo (warning: graphic) of a child during the Sudan Famine crawling toward an aid station. There was a vulture behind the child, just hopping along, waiting for him to die. At the time, Kevin thought it was his job to record the events, but not intervene. He took the picture and left. He won a Pulitzer and then, haunted by the things he saw, committed suicide a few months later. Some of the facts have been subsequently contested, but that was the version I read.

The more I explored the idea of these time travelers (or chronmen as I called them) jumping into the past to witness the last terrible moments of someone’s life, the more I saw Kevin Carters, people whose job gave them front row seats to terrible events but were unwilling to do anything about them. I began to wonder about that mental toll. How do they cope? What happens when they break?

And, fuck it, we also kill some Nazis along the way.

← The End of All Things Tour: Cities and Dates and an FAQ
The Barren Field →