Some questions asked of me recently in person, via e-mail or on social media.

You haven’t written anything much on the Hugos situation recently. Why not?

Because at this point it’s boring as shit and neither I nor anyone else has anything new to say about it, and I have better uses of my time. Plus I’ve already voted. Done thinking about it unless forced to.

Related: Hey, remember that boycott of Tor Books? Did that affect you at all?

As far as I can tell it had no impact on my sales, or anyone else’s. This did not surprise me in the least.

Hey, they’re taking down the Confederate flag at the South Carolina capitol! Your thoughts on that?

Enraging business associates with your racism when you’re never going to be president anyway doesn’t appear to be a fabulous strategy.

Also not going to be president, but I’m glad he’s giving Hillary some worries.

I know very little about this. Glad I don’t have stocks there.

What very little I know about this makes me suspect the drachma is going to make a comeback there sometime soon.

Why would I give a shit about this in any way?

But she licked some donuts!

So don’t eat those donuts.

Please don’t make me kill you.

Bigots who should be out of a job.

Hope everyone there is having fun. I still want them to improve their harassment policy, which continues not to give useful examples of what harassment is, and I still won’t set foot into the convention proper until it does.

I think that’s everything today. 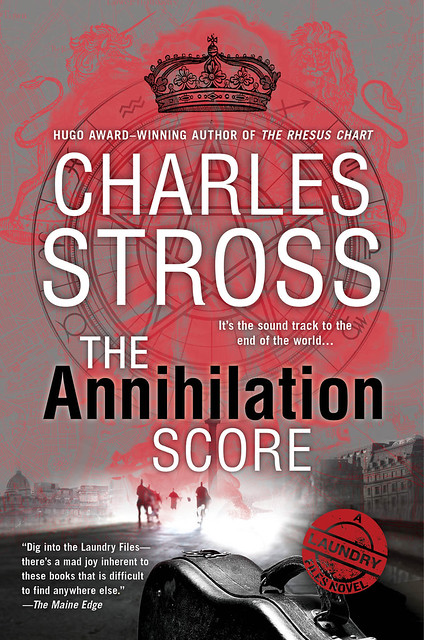 Here’s the deal: Charles Stross is awesome and his books are awesome and his Laundry Files series in particular is a hell of a lot of fun. Now Charlie’s here to tell you about The Annihilation Score, the latest installment in the series. You’re gonna have fun. That is all.

The other day (July 7th) was the launch day for “The Annihilation Score”, the sixth novel in the Laundry Files series. Magic is a side-effect of mathematics, Lovecraftian elder gods have noticed us using it and are coming to eat us, but don’t worry: Her Majesty’s Government has a plan for that. There are a lot of committee meetings involved …

I’ve been writing these stories for fifteen years, and while they started as a one-shot gag (a dot-com era hacker geek has fallen into a seedy 1960s British spy thriller: there are tentacles) over time they’ve developed into a complex world. They’ve also changed from a series of pastiches of spy thriller authors, to examinations of different aspects of the fantastic.

If we posit an underlying hard-SF(ish) cause behind various mythological entities — zombies, unicorns, vampires, Cthulhu — how would a government agency *really* handle them? And by “government agency” I’m not discussing the pop culture imagery of two-fisted agents confronting bad guys, but actual functioning (and occasionally dysfunctional) bureaucracies trying to digest the indigestible.

The springboard for “The Annihilation Score” is how the Police, Courts, and Home Office (the British interior ministry in charge of law and order) try to get a handle on a rapidly snowballing superhero problem.

Superheroes are heroic archetypes — the roots of the genre lie in the classical pantheons — the myths of the Roman, Greek, Norse, Ancient Egyptian (and, less commonly, Shinto and Hindu) cultures. Our cultural values are rather different from the classical early Iron age empires, but we still hunger for archetypes. Today we use superheroes to ask questions about human agency — with great power comes great responsibility, after all. But if you cut away the myth-making and archetypical trappings and boil them down to their pragmatic roots, as in *Watchmen*, you find yourself looking at unsavory vigilantes and lynch mob justice.

Superhero stories may be an assertion of human agency in modern fantasy and SF, but bureaucracies are all about the diffusion of responsibility and autonomy. Bureaucracies want interchangeability and impersonal procedures, not unique and irreplacable heroes. The reaction of a real world law enforcement bureaucracy to an outbreak of superheroes won’t be one of gratitude: it’ll be an attempt to bring the hammer down *fast* before the random vigilantes throw grit in the wheels of justice. The only job a bureaucracy can conceive of for a superhero involves wearing a Police uniform and doing it by the book …

… And that’s before we get to the knotty existential question of supervillainy. Most supervillain crime is routine aggro — assault, robbery, and ordinary street crime, only with the dial turned up to 11. After all, most police work is routine. Most crime is spontaneous disorder, and mindless with it. But there are exceptions, and how does a real police force deal with a real Mad Science supervillain?

Criminology is the study of the criminal mind. But the only criminal minds we have available to study are the incompetent ones — the ones who got caught. Successful criminals don’t get caught: they get themselves elected Prime Minister of Italy or Russia and pass laws granting themselves retroactive immunity. (“Treason doth never prosper: what’s the reason? Why, if it prosper, none dare call it treason.”)

Mad Science is more than a matter of putting more amps into the thing on the slab while Igor keeps the kite flying in the thunderstorm: so mad science in the 21st century needs a mad science organization, with a budget, human resources, research assistants, and a monetization strategy. Successful mad science villains are by definition organizational geniuses with a business plan — which means they’re rare, terrifying, and a existential threat.

So let’s bring this thought experiment back into focus on the personal. If you’re Dr. Dominique “Mo” O’Brien of the Laundry, teetering on the edge of a stress-induced nervous breakdown from one too many arguments with demons and tentacle monsters, being seconded to the Home Office to set up and run a new department *might* seem like a rest cure at first. But managing a small, tightly ffocusedPolice unit staffed by superheroes requires a rare combination of personal characteristics, including the ability to deal with unrealistic expectations from above and hero-sized egos from below. It’s almost inevitably going to be immensely stressful, and until you can train up a management team to shoulder some of the workload you’re on your own.

And that’s before a mad scientist calling himself Professor Freudstein robs the Bank of England and the National Library in rapid succession, then embarks on a plan to destabilize the government …