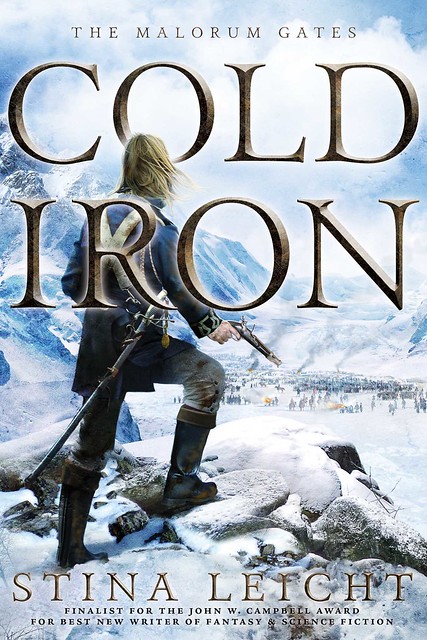 For her new novel Cold Iron, author Stina Leicht took inspiration in one of the genre’s foremost practicioners — but then gave that influence just a little twist. What’s the twist? A change of location.

About eighteen years ago, I happened upon an essay about the evils of Fantasy. In it, the author declared the whole genre to be inappropriate for Americans because it glorified feudalism. I was, I admit, taken aback by the audacity of that generalization. Largely because, well, Fantasy is a broad genre. It doesn’t only consist of stories about Joe Bob the lowly peasant farmer boy who finds the magic [sword/ring/stone] and goes off on an adventure with a mysterious [ranger/thief/wizard/bard/fighter] and thus, not only saves the kingdom from the [evil wizard/evil empire] but discovers he’s a long lost [prince/king/powerful wizard] who was foretold by the ancient [chronicles/fortuneteller.]

Fantasy outgrew that template sometime around 1986 with Terri Windling’s Bordertown anthology.[1] I’m pretty sure the likes of Charles de Lint, Ellen Kushner, Emma Bull, and Midori Snyder weren’t writing about how glorious it was to be the king. Nonetheless, there was a time when that template was in force, and to be honest, that was what drove me out of Fantasy for a while. So, I understood where that came from… to a degree.

At the same time, that essay made me think about Fantasy’s origins. J.R.R. Tolkien is the father of Fantasy, and J.R.R. Tolkien was a British author writing mythology for the British people. Of course, feudalism features heavily in his work. And that was when I asked myself the question that got me started writing Cold Iron: What would Fantasy look like if Tolkien had been American?

First, I set up my imaginary world in the end of the eighteenth century. North America existed before that, of course[2], but after some thought, I decided upon the late eighteenth century anyway.[3] Mind you, I didn’t restrict myself to that period. I wanted The Malorum Gates to be a secondary world fantasy. Middle Earth is. So, I pulled ideas and technology from a forty year period… say 1770 through 1810. In addition, Tolkien, although he was using medieval sources, chose to give his characters modern dialog. Therefore, I did too. Tolkien’s elves were primarily Finnish. So, my kainen are Scandinavian.

Tolkien also used Middle Earth to discuss the realities of war—realities that had deeply affected him, specifically World War I. For me, that meant dealing with themes from the Vietnam War.
I’m not, nor have I ever been a soldier. Still, that doesn’t mean I wasn’t affected. You see, I was a child when the Vietnam war played out on national television. It was on the news every night. I didn’t understand how much that affected me, a GenXer, until Hollywood began making films about the war. Frankly, I couldn’t bring myself to watch any of them because they brought on panic attacks. It was so bad that it wasn’t until 1995 that I could bring myself to watch Full Metal Jacket, and I still haven’t let myself see The Deerhunter. You don’t have to be a soldier to be affected by war. Being human is enough.

I’ve always been a bit of a hippy. I don’t believe that wars solve problems. I believe they create them.[5] Even as a child I was conflicted. I agreed with the protesters about ending Vietnam. However, I absolutely did not agree with how they often treated soldiers. Subsequently, Nels and Suvi, two of my main characters, live in a nation (Eledore) that claims to abhor war. The kainen of Eledore fear death. There are reasons for this, but it’d be spoiler-y for me to tell you why right now. Just understand they don’t even talk about death, not directly. They pretend everyone lives forever. Soldiers carry a death taint. Therefore, when Nels takes up weapons to defend himself and a few villagers from raiders, he’s made an outcast, and his sister assumes his place in the leadership of Eledore.

Oh, sure, there are certain tropes I couldn’t bring myself to give up on—as you can see. Epic Fantasy kind of has requirements or it doesn’t feellike Epic Fantasy. However, Eledore will one day be a democracy, and it will be repopulated with immigrants… eventually.

[1] Maybe even sooner than that.
[2] Pox Americana: The Great Smallpox Epidemic of 1775-82 by Elizabeth Fenn sites solid evidence that there were millions of American native peoples living in North America long before the white man’s westward expansion. In fact, the smallpox epidemic of 1775-82 was to the North American native population what the Black Death of 1347-51 was to Europe. That epidemic was started by white men who spread the disease among the native peoples with the intent of wiping them out. Smallpox was America’s first venture into germ warfare. Manifest Destiny, my ass.
[3] Some people will tell you that the Fantasy genre is a moveable feast. Writers can steal anything from any culture that isn’t nailed down. I’m not one of those people. My research indicated that a large segment of the native people of America are not happy with their culture being used as source material by white writers.[4] Thus, I respectfully decided not to go there.
[4] Ah, cultural appropriation.
[5] Yet, a great deal of my chosen entertainment contains war and violence. Trust me, I think about that a lot.
Cold Iron: Amazon | Barnes & Noble | Indiebound |Powell’s
Read an excerpt. Visit the author’s site. Follow her on Twitter.