Context: In 2006, Pluto was demoted from being a planet to being a dwarf planet, a move that many, including notable YA author (and personal friend) Scott Westerfeld, thought was a good move, because he and they are terrible people. When my daughter, then age seven, heard that Scott Westerfeld — her friend Scott! Who she liked! — was a “Pluto Hayta,” she felt compelled to make a video, both asking him why he held such hatred for our system’s smallest planet, and then showing him the consequences of such wanton contempt.

For years the video was unavailable, because I made it and displayed it in an AOL video service that is now (like pretty much everything else AOL) consigned to the bit-bin of history. But today, miracle of miracles, I discovered the Internet Archive had made a copy of the video file. I downloaded, it converted it, and put it on YouTube.

And so, here it is, and well timed for the recent Plutomania: My daughter’s 2006 video to Scott “Pluto Hayta” Westerfeld. Enjoy.

And yes, her t-shirt in the video does indeed say “I Have Issues.” She did! With Scott!

Naturally, I showed it to Athena (now aged sixteen) before I posted it. She thought it was adorable. And, well. Yes. Yes, it is.

The biggest irony? Pluto now has a feature on its surface named for Cthulhu. My daughter was prophetic, at age seven, she was.

(P.S.: Here’s Scott’s response to the video at the time. Still wrong! History shall judge him. And all who led us down this dark path.) 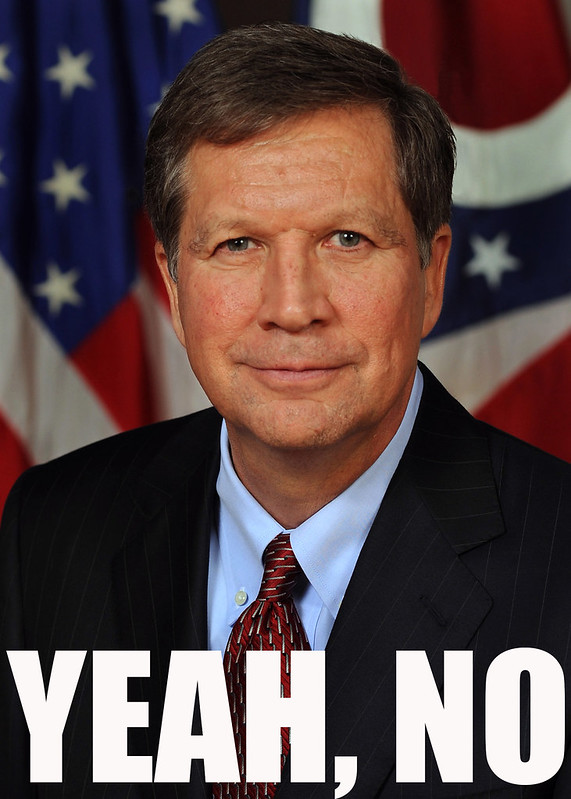 He has no chance. For either. None whatsoever.

Which, you know, is too bad, at least the “winning the GOP nomination” part (I don’t want him to be president). As far as the current iteration of the GOP goes, he’s not bad — he’s pretty smart, he’s well-experienced both as a current governor and a past US representative, and as a governor in a swing state, he’s been reasonably pragmatic, or at least, as pragmatic as any GOP governor is these days. All of which is to say that if he did somehow manage to become president, I would expect him to be a bureaucrat rather than an ideologue, which would suit me just fine.

But I don’t expect him to get out of the first few primaries, if he gets that far, because, well, who is the Kasich primary voter? Those who want someone with gubernatorial experience will go to Bush or Walker first and then probably Jindal; those who prefer conservatism fiery and/or unhinged have a whole buffet to choose from. Kasich as far as I can see is always the “other” option. Oh, sure, there are Republicans out there who could be on board for “boring competent conservative,” but recent history suggests they don’t show up for primaries (and if they do, hello Bush). I’m just not seeing the Kasich groundswell. Hell, we barely think of him at all here in Ohio.

Unless Kasich is entirely delusional, he also knows he has no chance, which makes you wonder what his endgame actually is. VP? Maaaaaaaybe? Bush/Kasich or (oy) Walker/Kasich is something I could see, with the idea that Kasich could deliver Ohio. This may just be his way of popping onto the radar for that. Other than that: Secretary of the Treasury, maybe? Positioning himself as a lobbyist once he’s two-termed out of the statehouse here in Ohio? It’s gotta be something, because “actually becoming president” isn’t going to be it.

But, we’ll see, won’t we. I’ve certainly been wrong before, even if I don’t expect to be about this. 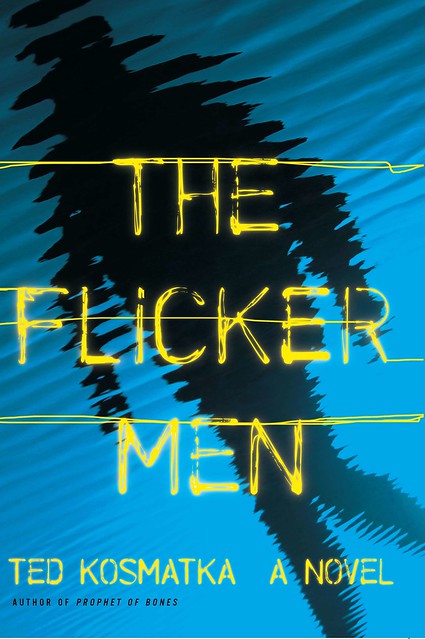 Hey, you know quantum physics? Ha! It’s a trick question, because no one truly knows quantum physics — at this point we know just enough to know how little we understand about what goes on down at that level. Which, as it happens, makes it fertile ground for fiction, as author Ted Kosmatka found out with his novel The Flicker Men.

The electron leaves the gun at one tenth the speed of light. It travels as a probability wave, passing simultaneously through two slits carved in a piece of steel. On the far side, an interference pattern forms where the waves cross each other—and for just a moment, the math of the universe is laid bare before you. It’s all probability. Uncertainty. A schematic of what might be.

But bend and look close. There, you see it?

The big idea for The Flicker Men was actually a small idea. Quantum-sized, in fact. I was reading up on quantum mechanics, with its strange interaction between observer and phenomena, and I found myself wondering about the nature of observation in a quantum system. I mean, what, precisely, is an observer? Is consciousness required?

In the everyday world that we occupy, observers are fairly mundane, but in the realm of quantum mechanics, that shadowing half-world where light is both particle and a wave, the question of observation accrues fundamental importance and has far reaching implications for reality itself.

What if you used the principles of quantum mechanics to define, exactly, the parameters of observation? What if you found something you hadn’t expected? What if all observers weren’t created equal?

The Flicker Men is an expansion of my earlier short story “Divining Light,” originally published in Asimov’s magazine. For me, it all started with the famous double-slit experiment. For years I was obsessed with this simple, elegant experiment which demonstrates the wave/particle duality of light. They call it quantum weirdness, but that term always seemed too benign to me. It seemed more like quantum brokenness, like there was something fundamentally contradictory about the way our universe functions. Nobody would believe in quantum mechanics if there wasn’t such a consistent mountain of repeatable evidence for it. How can light be both a wave and a particle? How does a probability wave collapse into existence? And then there’s quantum entanglement to contend with—one electron linked to another, Einstein’s spooky action at a distance.

The two-slit experiment sits at the very heart of these questions and lays wide their contradictions. In order to believe in the double-slit experiment, you have to accept that the mere act of observing a quantum system can change it. Probability collapses when observed. Waves are transformed into particles; probability into fact. Reality, somehow, knows if someone is watching.

In the original short story “Divining Light,” I came up with a thought experiment that tackles the two-slit idea in a slightly different way. The experiment, with a subtle change, becomes a kind of test, and the results are open to some frightening interpretations. In the world of the novel, no one is ready for what is discovered.

After the original short story’s publication, I received a lot of mail asking where the real science in the story ended and the speculation began. The answer is somewhere in the middle, though I like to think of the entire novel as an extended thought experiment, each piece building on the logic that came before. In the novel, I explore the original premise further and delve into deeper implications about the nature of consciousness and what it means to be human.

I was a video game writer at Valve for more than five years and my time there gave me a new appreciation for the way our perceptions shape our understanding of the world around us.

I’ve always been a fan of ambitious stories with big, world-spanning arcs; and in a lot of ways, a physics thriller is an ideal platform for tackling the big questions.

The protagonist of The Flicker Men, Eric Argus, is a man haunted by his life’s work. He’s a promising young researcher who made a big splash in quantum mechanics at a young age, but now he’s burned out, fast approaching the end of his career, and wearing out his last chance.

Instead of focusing on new research, he turns instead to face what’s been haunting him. What should have been a dead end turns into an unsettling new chapter of his career. His experiment leads him to a discovery that shakes the foundations of modern physics and opens him up to dangers that he never knew existed.

The Heisenberg Uncertainty principle tells us that there’s a limit to what can be known, and thus the world is built at least partially on secrets. Eric and his fellow researchers learn an important lesson in the wake of their discovery. Behind every great secret are those who want it kept.