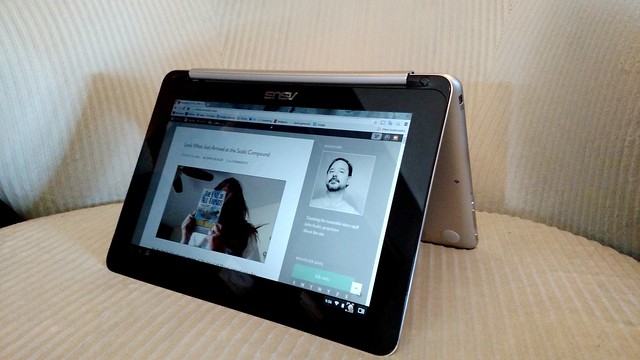 I have a number of Chromebooks here at the house — some of you might remember I was given a CR-48, the beta version of the Chromebook, by Google back in the day — and I like them quite a bit for what they are, which are cheap and cheerful computer terminals that back up to a mainframe we now call “the cloud.” We have a few around the house and I use them for casual writing and cruising the Web, and Athena and her classmates use them at school for classwork. They’re a good solution for a lot of things that people use computers for.

My most recent Chromebook was an HP 11-incher which has developed a couple of problems — its charging cord isn’t working anymore and every other cord I get for it say it’s “charging at low power” and the trackpad is getting wonky — so I was planning to do an upgrade soon. Then Asus brought out the Chromebook Flip, a Chromebook that has a 10-inch touchscreen that you can flip over and use as a tent display or a tablet, with 4GB of memory, all for less than $300. The reviews have been pretty good, so I thought I’d check it out. It arrived yesterday evening and I’ve been playing with it, as a laptop and a tablet, since then.

So far? I’m pretty impressed. It’s slightly smaller than the Chromebooks I’ve been used to; you might not think there’s a big different between a ten-inch device and an eleven-inch device, but it turns out there is, and as a consequence I’m doing a tiny bit of retraining my brain where all the keys are on the keyboard, which is a bit more cramped than on my other Chromebooks. This is a pretty minor thing and I don’t have a monster hands in any event. The track pad is also very nice, if small. Acclimate yourself to the idea that everything on this thing is a little small, and you’ll be okay.

What I really like is that when you flip it over and use it as a tablet, it’s a size that makes sense to be a tablet — big enough to give you real estate to look at, not so large that the whole thing feels horribly awkward in your hands. As a point of comparison, I also own the Dell XPS 12, which has a screen which you can also flip over and use as a tablet. It’s a great laptop which I highly recommend (or did; Dell retired it for the also apparently excellent XPS 13), but I almost never use it in tablet mode because the 12.5-inch screen is just too big, and the whole package weighs in at over three pounds, which is a lot in that form factor.

The screen here, on the other hand, is 10.1 inches — basically, it’s a ten-inch tablet. The whole thing comes in at under two pounds, so it’s easy to walk about with it in tablet mode, or to sit with it in bed in that format. The 1200×800 screen isn’t brilliant compared to other mobile devices, but it’s fine and on par with first generation tablets. In fact, the whole thing basically feels like a first-gen iPad in your hand. It’s not as modular as a typical tablet — everything still runs through the browser because this is ChromeOS, not Android — but if what you’re mostly doing is browsing the Web, I don’t think you’ll notice much difference. There’s an onscreen keyboard in Tablet mode that will be very familiar to Android users.

The hinge that you use to transform the computer is nicely stiff, at least so far; we’ll see how it holds up to lots of use. In tablet mode, the keyboard disables itself and faces outward, opposite the screen. I understand some people find this weird and maybe a little uncomfortable, but honestly it didn’t bother me. Some of the reviews I’ve seen have griped about the screen’s large bezels; I agree they could be smaller, but then again in tablet mode they give you a decent amount of space to grip the thing without activating the screen, so again, I think it’s fine. The touchscreen itself is pretty good. I haven’t had any problems with touches not registering, or stuttering when I scroll. I suspect it might actually be a better as a touchscreen than the screen on my XPS 12, which was rather more expensive (but admittedly, released a couple of years ago).

Other notes: The body of the Flip is aluminum, not plastic, which makes it look and feel nice. The keyboard, aside from its being a little small, is responsive and about as good as you’re going to get on a device this size. The keys are not backlit, but if you’re expecting backlit for under $300, then bless your heart, I’d say (I would still love a Chromebook with a backlit keyboard, though).

Two USB ports, HDMI mini out and SD mini card in. Battery life seems to be pretty good so far (but it’s waaay too early for me to say). For what I use Chromebooks for, it’s handling everything I’m throwing it, but as with any Chromebook, don’t expect miracles with multimedia or standalone programs; again, this is a terminal, not a full-featured standalone laptop. If you’re looking at these things, I really do recommend spending the extra $20 for the 4GB model. The internal storage is 16GB (utterly standard), but you can add via the mini SD port, and everything is designed to store to the cloud in any event. In all the years I’ve been using Chromebooks, running out of storage on the laptop has never ever been a problem.

All of which is to say that if you’ve been waiting for a perfectly good Chromebook that you can also use as a perfectly good tablet, and for under $300 to boot, this is going to probably work for you really well. I like it a lot, and will probably use it for wandering about the house and also for short trips where I know a) I’m going to have a consistent Internet connection, b) I won’t have to be doing a whole of work that relies on specific programs. This covers a surprisingly large number of trips. I don’t think I’d write a full novel on it; but I might write a few pages of one, while I was traveling.

More details later if my opinion changes substantially, but so far: Thumbs up.