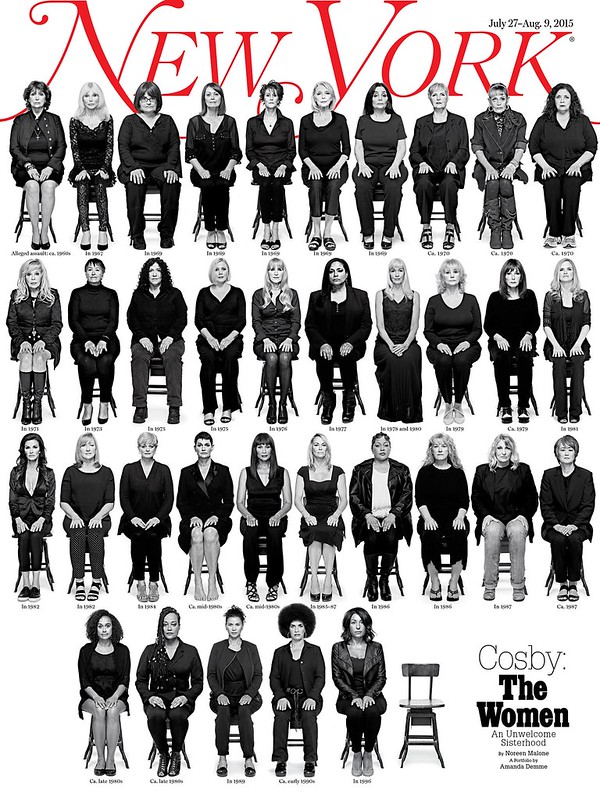 So, that’s a hell of a magazine cover. As of this writing the New York magazine site itself is down because of a hacker attack; the hacker in question alleges this has nothing to do with Bill Cosby. Interesting timing nonetheless. Here’s the link to the story package when it goes back up. You should read it. If it’s still down, Vox has a write-up on it.

A friend of mine tweeted a comment last night that said “power corrupts” and I tweeted back something snarky about that; turns out she was tweeting about Bill Cosby and I missed the context, so I apologized and deleted my tweet. Turns out I am just as susceptible to the failure mode of clever as anyone else.

But I had additional thoughts on her comment. I think it’s true that power corrupts, or that it can. I also think it’s true that power reveals — which is to say, that with some men and women, it’s not that having power weakens their will or leads them into temptation, but rather that power allows them to indulge in the things that they’ve always wanted to do. They didn’t need to be corrupted. They needed only the means to do what they willed, which power provided.

Ultimately, however, it doesn’t matter if power corrupted or revealed Bill Cosby’s nature. I don’t imagine it matters to the women who were sexually assaulted whether Cosby gave into temptation or indulged in his will, or both. At the end of the day they were still raped by him. And at the end of the day, for decades, they were told there was no point in telling anyone about it because no one would believe them. Corrupted or revealed, Bill Cosby’s power protected him, until it didn’t. I am absolutely sure that the irony of what kicked the Fall of Cosby into high gear was Hannibal Buress, another man, calling Bill Cosby out on stage was not lost on these women, or women in general. The information was out there; women had been saying these things for years. They still needed a man to say it in order to have the world pay attention.

I’m not sad for Bill Cosby. He raped women, he did it for decades, and now everyone knows he did it. He deserves condemnation for it, and he deserves to see his reputation destroyed (he also deserves jail time, which at this point he is unlikely to receive. But I think for a person like Bill Cosby, the destruction of his reputation is probably no less painful than time in a cell). The man was and is a genius, and his comedy mattered to me; I remember being a kid listening to his comedy albums at the West Covina public library and trying (and failing) not to laugh out loud in a place where you weren’t supposed to make a lot of noise. Bill Cosby: Himself was one of my favorite comedy concert films. And by the time Himself was released, Cosby had assaulted 22 of the 35 women featured on that New York cover. Bill Cosby is a genius; Bill Cosby is a rapist of women. The former does not excuse the latter and never should have.

I am sad we are still in a place where women aren’t believed when they come forward about sexual assault, and that it’s such a matter of fact of our culture that The Onion can satirize it. I’m sad and sorry for the women who had to wait until a man came forward to call out Cosby in order for the cultural tiller to shift in their direction. Anita Sarkeesian — who knows something about the bullshit women have to put up with in order to speak — and others have said that one the most radical things you can do is believe women when they talk about their experiences. It seems like a dramatic statement until you take a hard look at that New York magazine cover, and the thirty five women there, bearing witness to sexual assaults over four decades, finally being believed in some cases fifty years later. You realize it’s not dramatic at all.