In case you’re curious how I do what I do on a daily basis. And I know you are! Here’s the link.

Also, if you’re coming over from Lifehacker on the promise that I am hilarious, here’s a link to what happened when I installed Windows 10 on my laptop the other day. If that is not sufficiently hilarious for you, I am sorry. I suppose I am not actually funny at all. 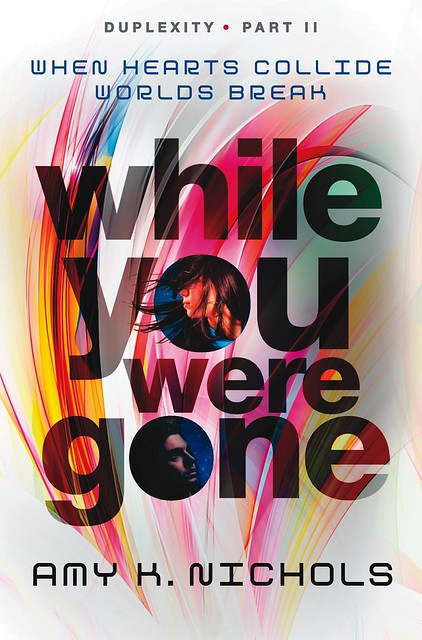 Robert Frost wrote about taking the road less traveled, but what if the roads were equally traveled, just… different? And you could, in a way, travel down more than one? Amy K. Nichols have given this scenario some thought in her Duplexity series, of which While You Were Gone is the second book. Here she is to tell you about it.

Have you every wondered what your life would be like if you’d chosen that other career? If that first date had led to a second? If you hadn’t been able to avoid that accident? If the doctor’s diagnosis had been different?

What if there are parallel versions of you living out the paths you didn’t take? Even better, what if you could walk for a time in their shoes to see how your lives turned out?

This is the kind of stuff I love to think about. It’s also the Big Idea behind the Duplexity series (Now That You’re Here and While You Were Gone).

I didn’t set out to write books about parallel universes. As with many stories, this one sort of landed in my lap, or rather in a chair in a high school English class. I’d started writing what I thought was a short story about a teenage girl and her nerdy best friend. The story began with the girl waiting for class to start when suddenly this loser in the seat next to her woke up scared and confused, not sure where he was or how he got there. He did recognize her, though, which I found interesting. I was curious enough about the situation to keep writing. Before long I’d completed the manuscript that eventually became the first book in the Duplexity series, Now That You’re Here.

The story follows street-smart graffiti artist Danny Ogden. When an explosion causes him to jump to a parallel universe, he gets the chance to see the life his parallel self leads. He quickly discovers it’s one full of pain and disappointment. His parents are dead, his friends are criminals, and he’s a ruthless bully. Straight-A science student Eevee Solomon agrees to help him figure out how he got there and how to get him back home. When he develops feelings for Eevee, though, he isn’t so sure home is where he wants to be.

My agent sold the novel to Knopf as a two-book series, with the second book following the other Danny and Eevee in the parallel universe over the same timeline. That second book became While You Were Gone.

When the explosion occurs in the first book and Danny jumps to our world, his parallel self jumps to his world where suddenly he has the life of his dreams. His parents are alive. He has a cool best friend. Girls actually like him, including promising young artist Eevee Solomon. The society he lands in, though, is a police state on the brink of collapse. When he discovers his parallel self has secret ties to an underground anarchist group, he finds himself faced with the prospect of losing everything he loves all over again.

Writing Now That You’re Here and While You Were Gone gave me the chance to explore that thought experiment in fiction. It was an intersting opportunity. The process, however, wasn’t without its share of frustrations.

I’d originally written Now That You’re Here as a standalone and threw in a bunch of fun and crazy ideas about Danny’s parallel world. The surveillance state. Censorship. Arizona having an ocean. An uneasy truce between the US and Mexico. Then, years later, I got the book deal and suddenly all of those passing mentions became the worldbuilding of While You Were Gone. Also, because both books occur over the same three weeks in April, the second book’s timeline and structure were dictated by the events of Now That You’re Here. Plotting the second book was like fitting the pieces of an extremely difficult puzzle. Often I felt like a companion on Doctor Who, begging The Doctor to go back and change the past (aka book one) only to be told some events are fixed points in time (aka sent off to production) and can’t be changed. If only I’d had my own TARDIS!

Still, writing the Duplexity books was an exciting and satisfying ride, especially for a debut author. They gave me the chance to create multiple versions of the same characters in parallel worlds. They allowed me to explore fascinating concepts like wormholes, chaos theory, and teleportation. They also gave me a crash course in writing a series. Mostly though, they allowed me to play with those thought experiment questions I love so much. It’s unlikely I’ll ever trade places with my parallel self or see how my life would have played out had I made different choices. Watching Danny experience that, though, was the next best thing.