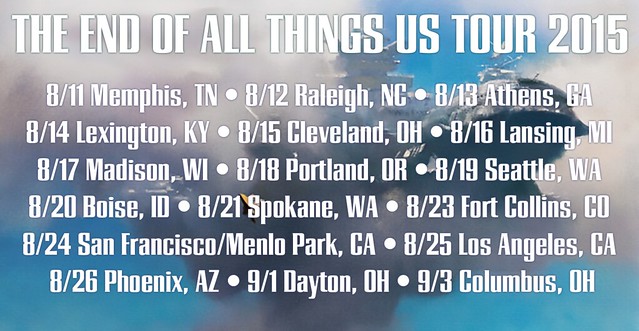 We’re just a few days out from the beginning of the tour for The End of All Things, so a few things about what will be going on here and other places whilst I am out and about.

1. First, the site won’t be going hiatus — I have seven Big Ideas scheduled while I’m out on tour and it wouldn’t be fair to them, and anyway, I like posting — but, as usual when I am out on tour, I’ll likely post rather less, and most of my personal posts are likely to be brief. Hey, I’m traveling and am likely to be slightly discombobulated most of the time I’m not at an event. If I go longer than brief, I’ll be babbling.

2. As usual with touring, the place where I’m likely to do most of my updating will be on Twitter. Because it’s damnably convenient, that’s why. If you’re not already following me and want to be as up-to-the-minute as possible on what I’m doing for the next three weeks, now would be a good time to follow me there.

3. Also as usual when I’m touring, for the duration of the tour (or more accurately, from mid-afternoon on the 10th until sometime early on the 28th) I’ll be stepping away from my email for the most part. Which is to say I might read email that’s sent to me, but probably not, and unless you happen to be my agent saying “everything is on fire call me now,” I’ll probably not respond (and if you were my agent, in that situation you’d be likely to call me anyway). So if there’s an email you absolutely want me to see before the end of the month, well, better send it soon. If you send it after the 10th, you’ll get my automatic reply reminding you of all this.

So, this popped up in the “KotakuInAction” subreddit, i.e., “the place where GamerGaters who don’t realize GamerGate is sooooo 2014 hang out”:

Naturally, I had some thoughts.

Look at these complete assholes. https://t.co/idbxZnMlbG

I DO NOT KNOW OF THIS CARY DOCTARAMOW OF WHICH YOU SPEAK https://t.co/O6sHX4Sg6V

Think like a "KotakuInAction" commenter: 1. Wrap your breathe-hole in saran wrap 2. Wait five minutes 3. Hit yourself with a hammer 4. Go!

OH MY GOD PEOPLE SCALZI AND DOCTOROW BLURB EACH OTHER'S BOOKS THE RABBIT HOLE IS DEEPER THAN WE EVER KNEW pic.twitter.com/9tfILDKXQ8

Oh my God. Guys. Guys. You gotta see this. This is AMAZING. I mean, this is just THE BEST THING EVAR. pic.twitter.com/uzINLs4Q6I

ZOMG YOU GUYS I FOUND THIS VIDEO OF SCALZI AND DOCTOROW TOGETHER FROM SEVEN YEARS AGO FOLLOW THE CLUES PEOPLE https://t.co/XK5BZsYKRp

GUYS. GUYS. LOOK AT THIS. SCALZI ONCE CO-DEDICATED A BOOK TO DOCTOROW. HOW COULD THIS HAVE BEEN HIDDEN FOR SO LONG pic.twitter.com/SzJrh0yacK

Seriously, though. How these people get through life without poking their eyes out with spoons is entirely beyond me. 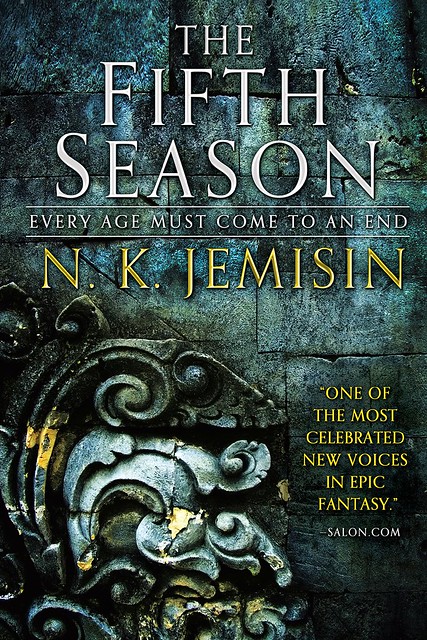 A few years back, I had a dream of a woman doing a Badass Power Walk towards me, with a mountain floating along behind her. I knew she was about my age — early forties, that is — and I could see that she wore dredlocs as I do, but it was very clear in the dream that she was not me. She was angry with me, in fact, because of something I’d done or hadn’t done, and if I didn’t find a way to appease her quickly, I knew she was going to throw that mountain at me. Why was she so pissed off? No idea. How was a mountain following her around like a geological puppy? She was controlling it through some unknown means. I woke up from this dream in a cold sweat — and fascinated. That was the moment the Broken Earth trilogy, of which The Fifth Season is book 1, was born.

I made some immediate assumptions about this woman and her world. First, that she wasn’t unique; there were others who had the ability to control mountains and everything associated with them (i.e. orogenesis). Second, that her anger wasn’t something recent or new.  You don’t toss around mountains over one bad day.  This woman had a lifetime’s worth of reasons to be angry — like being treated as a second-class citizen and having her hopes for the future crushed again and again.  But what kind of society would discriminate against such an obviously powerful person, and why?  The trilogy is my answer to that question.

Right away I faced two major challenges in trying to tell this story: the worldbuilding, and the voice.

Now, I love worldbuilding. I do it for fun and profit. The worldbuilding for TFS was more daunting than usual, though. See, in the Stillness (the sole supercontinent of The Fifth Season) extinction-level volcanic winters and other seismic disasters occur on a frequent basis. This meant I needed to learn a lot more about seismology, given that I’d never even felt an earthquake, or seen a volcano or a geyser, before I started researching this novel. (I was so excited when we had a quake in New York right after I started work on this novel! Even though at first I just thought the subway was unusually rumbly that day.)

More challenging was the fact that nothing in this world could resemble anything in our own world. Why should it? No society on Earth, outside of a few “preppers” and religious extremists, is designed for apocalyptic survival. Yet the people of the Stillness are biologically and culturally adapted for periods of extreme, rapid, hostile climate change. The can detect impending quakes through the use of special areas of the brainstem that we don’t possess, and one of their races prides itself on its acid-proof, ash-filtering hair type. To them, it’s normal to speak of six senses rather than five, and to consider a woman beautiful only if she’s at least six feet tall, at least a size 16, and looks like she can wrestle a bear. (At least.)

This was where the other challenge, the one of voice, kicked in: how could I immerse readers in such a fundamentally alien milieu? Doing that might be a staple of science fiction, but it’s rare — and not always welcome — in fantasy.

I experimented with test chapters and a proof-of-concept short story to get a feel for things before I settled into writing the novel. I picked different tenses, voices, characters, sounds and feels. First person felt too intimate, somehow. Past tense lacked impact. I like the immediacy of present tense; it can feel odd when you’re not used to it, but it’s surprisingly easy to adjust. (Psst: you just did.) Makes for some really visceral action scenes.

But there was one character for whom third person present tense never worked: Essun, my protagonist. The story starts in a moment of extreme trauma for her: she comes home from work one day to find that her son has been beaten to death by his own father. This is thankfully an experience that few readers will have had in real life, and yet it’s something that any reasonably empathetic human being can understand: that moment of almost surreal shock, the disbelief, the mental reeling. I needed a voice that could convey these feelings, which would underlie all of Essun’s actions throughout the trilogy — because that kind of trauma never really goes away. You just rebuild yourself around it.

What worked best was second person. I’ve always thought of second person as distancing; after all, it’s impossible for the reader to ever truly be “you”. Yet I’ve read some incredibly intimate second-person stories, and as I actually tried writing it for the first time, I found that it’s sort of amazing and powerful — both distancing and intimate at the same time. You can’t be this person, but you can understand her. It was perfect.

…Aaaaaand here I had an artistic panic attack. I liked what was developing, but was it even remotely salable? It’s been five years and I haven’t stopped hearing complaints from readers about the first-person that I used in the Inheritance Trilogy. SFF readers are remarkably quick to declare that they “just don’t do [person/tense]”. Or they’ll declare a story pretentious without ever having read it, simply because it’s written in a style they’re not used to. I wish I could say that I don’t care what those readers might think. In a fit of anxiety I showed those first few chapters and an outline to my editor and agent and said, “OK, is this worth something or is it a hot mess?” They must’ve decided it was worth something; I got a contract for the whole trilogy a few days later.

Now I guess I’ll see if readers think it’s worth something, too.