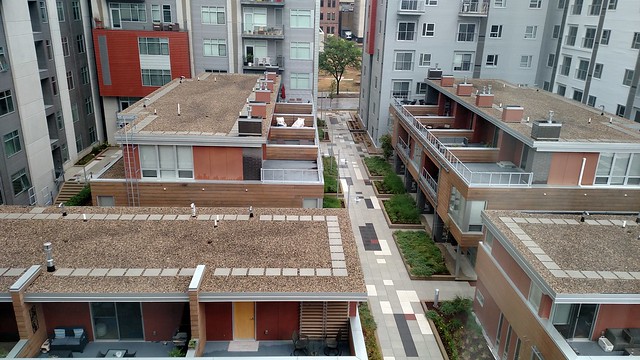 No parking lot. I hardly know what to do with myself. Also, very modern. Feels like Piet Mondrian might have a pied a terre here.

Tonight! 7pm! Madison Central Library, and sponsored by A Room of One’s Own. Very much looking forward to tonight’s event.

Tomorrow! I leave the middle of the United States and head west to Portland! And thence to Beaverton, where I will be appearing at the Powell’s there, also at 7. Get there on time because The Doubleclicks are opening for me and will be playing a couple of songs. And they are awesome.

And that’s where things are at the moment.

It’s here. I’m doing five events: A reading, a signing, two panels and a kaffeklatche. I’m only there on Friday and Saturday, however, so if you’re looking for me before or after then, I regret to say it will be in vain. I’ll be in Seattle on Wednesday, Boise on Thursday, and Fort Collins on Sunday. The tour. You know.

Also, when you click through, you will see my name presented without capital letters. This is an error made when I bought a membership. I have not suddenly become precious about this.

Hi there, I’m John Scalzi, and if you’re reading this, you may have just decided to follow me on Twitter, or may be thinking about doing so. If this does in fact describe you, here is what you should know before clicking the “follow” button.

1. If you have no idea who I am besides some guy on Twitter, here’s a brief bio.

2. I post on Twitter a lot. 40 to 60 times a day is not unusual, and some days I can put up more than a hundred tweets. Many of those are replies to people, so you might not see all of them. Nevertheless, I am a high volume tweeter. If you’re not prepared for me stuffing your tweetfeed full of my silliness, it’s okay to bail out. I don’t mind!

3. I’ve written a bit about how I use Twitter, and how I interact with followers, and why I happily mute and/or block people who want to start fights with me on Twitter. That piece is here. It’s worth the read. Short version: I often use Twitter as a performance space; I respond to tweets from followers but not all of them because of time and other factors; I’ll mute and/or block you if I think you’re obnoxious.

When people tweet at me and I respond, sometimes I respond by “quote tweeting” — quoting the entire tweet and responding to my feed at large. I do this mostly when I think the answer will be interesting and useful to my entire followership, and occasionally when I want to make a point, and someone’s tweet serves that point. Also, in rare cases, if someone is being a jerk to me, I may quote tweet them for the purpose of snarking on them. If you tweet at me, there is a chance I will respond with a quote tweet, which will air your tweet to my full followership. If you are not comfortable with that possibility, I would suggest not tweeting at me.

(Incidentally, if you see me snark at someone on Twitter, or otherwise decide someone is being a jerk to me, DO NOT decide this means I want you to saddle up and join a Twitter mob against them. I don’t. Twitter mobs are awful and also I can fight my own battles online. Please never be an asshole on my behalf.)

4. I am often asked for retweets, enough so that I have an official policy on retweets. Here it is. Also, if you’re an official Twitter account of a business, or someone trying to sell/promote things on Twitter, you should look at this.

6. I very often tweet about politics and social issues. In the US, I am considered a liberal, and everywhere else in the English speaking world I suspect I am middle-of-the-road and maybe leaning ever-so-slightly to the right. Also I think Trump is legitimately the worst and most corrupt president of my lifetime. If you get annoyed with these sorts of politics, my Twitter feed may also annoy you. Fair warning.

New Bit, 6/30/2020: Note that not everyone I follow on Twitter shares my own political and social positions. I sometimes disagree with (and sometimes vehemently so) the political and social positions of some of the people I follow — and vice versa, if they follow me. Me following someone should not be seen as an endorsement, implicit or explicit, of their positions. If my following any particular person(s) on Twitter is something you find disagreeable, for whatever reason, that’s valid, and also, it’s probably best not to follow me.

7. Because I tweet about politics and social issues, from time to time groups of people who don’t like my positions like to try to gang up on me on Twitter. So from time to time you may see me tweeting about the fact that stupid people are trying to annoy me and/or see the tweets I put out where I belittle and condescend to them. When that happens, don’t worry, it’s usually over fairly quickly (because I mute and/or block them immediately thereafter).

8. Other common tweet subjects include: Writing and publishing, food, pets, travel, family and various things I think are funny. I retweet a lot of cool stuff my friends are doing so you can find out about it too. I will very often have conversations with these friends, on matters both snarky and serious. Feel free to follow along.

10. If eventually you find me an exhausting and/or annoying part of your tweetstream, please unfollow me! I will not be in the least offended. I want my presence in your Twitterverse to be a fun and enjoyable one, and if it isn’t, then I’m okay with you taking your leave of me. There will be no hard feelings.

And now you know what you need to know! I hope you enjoy my presence on your Twitter feed, and thanks for following me.