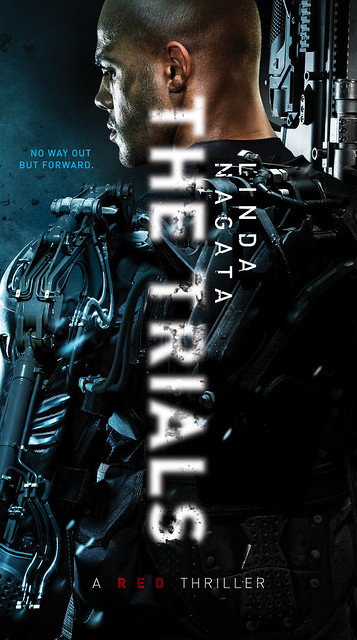 In today’s Big Idea, Linda Nagata explains how short stories were the gateway to her “Red” series of novels, of which The Trials is the second. Short stories! Gotta keep an eye on ’em!

Stories can be dangerous, demanding things.

The Trials is the middle book in a trilogy of military thrillers that took over my imagination. I had never planned to write a military novel—not until an alliance of small ideas infiltrated my subconscious and gained control, insisting that together, they were the Big Idea behind a new science fiction story world.

The first incursion came in the fall of 2012 when I was struggling to write a hard SF short story. The reason I was having so much trouble? This was a completely new story world, so everything about it had to be worked out: the state of the Earth, the level of technology, the extent of solar system exploration. All of this for a storyworld that I didn’t expect to revisit—until I found myself writing this odd bit of background about an AI antagonist known as “the Red.”

“…it bled through every aspect of life—a relentless tide of information and influence shepherding the thoughts and actions of billions along paths determined by its unknowable goals.”

Yeah…what does that even mean?

I wasn’t sure. Not at first. Nevertheless, I had a strong feeling I’d just found a key element of a new novel.

In fiction, AIs are often depicted as self-aware entities with relentless survival instincts and a hunger for power—a lot like people, just smarter and faster. But it’s narrow AI that’s used everywhere these days, non-sentient and focused on a specific task. Self-awareness is not expected, wanted, or required. So what if an AI of that sort—let’s say a marketing AI, one originally designed to gather data on individuals, to assess their wants, and to manipulate their behavior in ways both subtle and overt, simply evolved to do its task better?

I mean, we’re already on our way to that. I’m sure you’ve gone shopping online, only to be pursued around the web by whatever product you were looking at. If you have an Android phone, Google is certainly aware of where you are and often has a pretty good idea of what you’re looking for. Facebook presumes to know us well enough that its algorithms can decide what posts we want to see in our newsfeed. Amazon has our browsing, buying, and reviewing histories going back years.

The NSA may have a lot of cached data, but surely it’s the consumer programs that know us best—and when they chase us around with ads, they are trying to influence our behavior by matching us up with products we might want to buy. So in the classic science fiction tradition of “if this goes on…” I wondered what might happen if a marketing AI began to more overtly shape potential consumers. Instead of matching people up with a specific product, it begins to match them up with the life they would have chosen if only they’d had the opportunity—and the courage for it.

There is a special sort of excitement when I sense a novel coming on. I felt it as I finished up the short story (which you can read over at Lightspeed Magazine—it’s called “Nightside on Callisto”). But in the end this concept was just a nice bit of background. I didn’t have my Big Idea yet.

Then, several months later, I was ambushed by another short story.

(You see? Stories are dangerous. They are demanding. They mess with your head.)

“Through Your Eyes” (Asimov’s April/May 2013) is set in a very near-future New York City. It’s a tale of surveillance, civil rights, the corruption of corporate-controlled government, and the power of hidden cameras in the hands of citizens. Just like the earlier story, this one had a background element that intrigued me: the idea that the military industrial complex that President Eisenhower warned us about so many years ago has come to control US foreign policy, and war is a business decision.

This is another “If this goes on…” scenario. After all, the United States has been at war for a very long time, and is likely to continue to be at war on some scale for many more years to come. In a long-term market like that there is money to be made—a lot of money—and defense contractors stand to reap large profits.

Again, a nice bit of background, but still not the Big Idea I needed—until I put the two scenarios together: a paranoid defense contractor declares all-out war against an elusive, rogue AI with unknown goals. The two ideas combined in an explosive rush of writing that yielded the draft of a novel in only four months—record time, for me.

That was The Red: First Light, the story of US Army Lieutenant James Shelley, who finds himself a frontline player in a widening conflict that forces him to question who he’s really fighting for—and just how far a soldier’s duty will allow him to go.

As soon as The Red was done, I was faced with writing a sequel. I knew The Trials would open with Shelley and his squad of cyborged soldiers facing the consequences of the decisions made and the actions taken in the first book—even as they find themselves locked into the hero’s role.

And that, I realized, was the Big Idea behind The Trials.

In a world linked by cell networks, satellites, mass media, and surveillance, the subtle but far-reaching machinations of the Red have begun to turn the lives of individuals into real-life stories—some quietly heroic, and some harrowing, some that derail lives, and others that inspire.

I freely admit that I’m addicted to adventure stories, and I suspect many of you are too. Action, struggle, discovery, facing your fears, overcoming the odds, doing the right thing in the face of danger, in the service of others. It’s all great to read about.

But what if you found yourself caught up in one of those harrowing stories, actually confronted with the hero’s role? Would you want it? Would you take it, even knowing that your life was being manipulated—and that not all stories have happy endings? That’s the choice Shelley has to make. As the world is gradually redesigned by an entity no one understands, he has become an actor handed a plot whose end he can’t know.

So the Big Idea behind The Trials is that it’s telling a story about being caught within a story—and as we all know, stories are dangerous, demanding things.