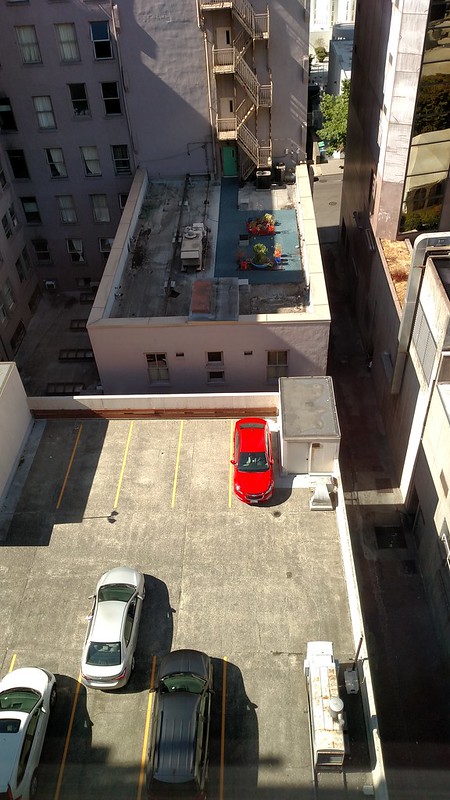 There is no place where the parking lots cannot reach!

Tonight: Seattle, at the Downtown Public Library, at 7pm. You know the downtown public library; it’s the one that looks all funky. Co-sponsored by the Elliot Bay Books. Come by, it’s going to be a lot of fun.

Tomorrow: Boise! For the first time ever, I am visiting you! I hope you will visit me too, at the Downtown Boise Public Library, at 7pm. See you there! 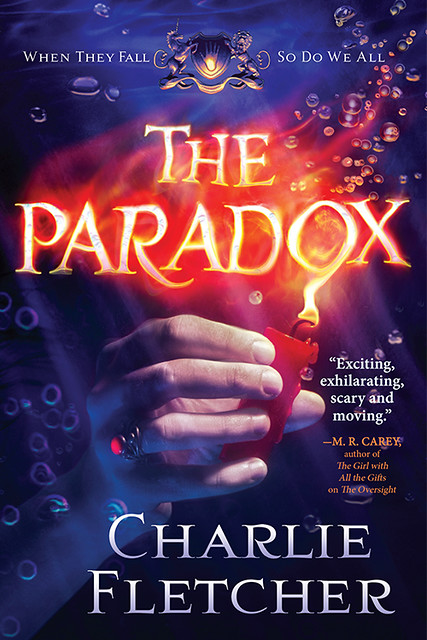 How to suss out the intricacies of a new idea, not just for a story, but for an entire world? For Charlie Fletcher, author of the Oversight series, of which The Paradox is the latest installment, the answer was simple: Go for a walk.

The setting for The Oversight and The Paradox began with a fragment that I wrote in my notebook without entirely understanding why:

“On the benefit of Mongrels, and the perils of Cold Iron”.

It’s a fine near-sentence, full of atmospheric period capitalizations and so on, but it’s also maddeningly opaque, and needed unpacking. So I did what writers do when ideas need to be nailed down. I whistled up my terrier Archie, and went for a long walk up the hill in the driving rain.

Of course there was rain. It was summer. This is Scotland.

I set off knowing one thing: I wanted to write an adult supernatural adventure set in early Victorian London. I like the period, I know the history and the terrain of the city, it’s a good and numinous place to hunt story.

What the generous host of this blog calls The Big Idea, I call True North because once I’ve found it I can always navigate my way through a story: it stops me getting frustratingly lost and instead allows me to get interestingly lost, which is quite a different thing altogether, being where the fun and serendipity happens.

In the world I was beginning to imagine there were two groups of people: those with supernatural abilities kept strong by keeping their blood ‘Pure,’ living hidden and apart from the other normal ‘natural’ majority. The Pure have freedom to roam where they will, as long as they obey ancient prohibitions – ‘Law and Lore’ – that protects each side from harming the other. Being disinclined to mix, the Pure have usually always kept to the wild places.

As I walked through the rain wondering how to dramatise this – and maybe because I was watching my dog trot ahead of me – it seemed logical that this unseen picket-line between the natural and the supernatural was best policed in an even-handed way by mongrels – those with the blood of both sides in their veins. From this the idea of the ancient Free Company for the Oversight of London was born.

The Oversight have thus never been pure, and have always been imperfect. They’re real and fallible, doing the best they can with inadequate tools and limited resources – just like the rest of us. But like Archie my terrier, who is of course mongrel to the bone, they’re resilient, scrappy, a little unpredictable and totally don’t know how to back off, even when they’re losing. They have all taken a vow to uphold Law and Lore to the death: hence the ‘benefit’ of Mongrels.

Having discovered I was going to tell the story through a kind of uncanny border patrol, I had to think about exactly what those inadequate tools were that they would use to try and enforce the balance they were sworn to. And that’s where Cold Iron suddenly made sense.

Amongst the strongest and most widespread articles of old folk belief is that you can escape the pursuit of supernatural entities by crossing running water, and that if none is nearby you can defend yourself with ‘Cold Iron,’ which they abhor.

This idea of Cold Iron as a sure talisman against the power of the supernatural made me understand why I wanted to write this story at this particular point in time: the 1840s mark the transition between the First and Second Industrial Revolution, iron production has leaped forward, steam power is perfected, and the onslaught of the railroad, spreading its web of iron across the virgin lands of the world is just starting to bite.

So, if the Pure have always been free to move wherever they will as long as they don’t prey on ‘normal’ people, what happens when the ‘normal’ start caging the landscape beneath a grid of uncrossable iron rail track, and cutting new canals of flowing water across the traditional trails, rendering them unpassable?

What in fact always happens when you get ancient treaties swept aside, and the old world realises it’s time to fight a last stand against the unthinking rapaciousness of modern?

I think you get resistance…

Writers tell you walking helps, and it does: I came off the hill with my True North, my Big Idea: history in flux, players in motion, unintended consequences – a reason to tell the story I was drawn to, and a question that hopefully resonates forward into our own world.

And speaking of the wider world, I also knew London was now just the place where it all begins…