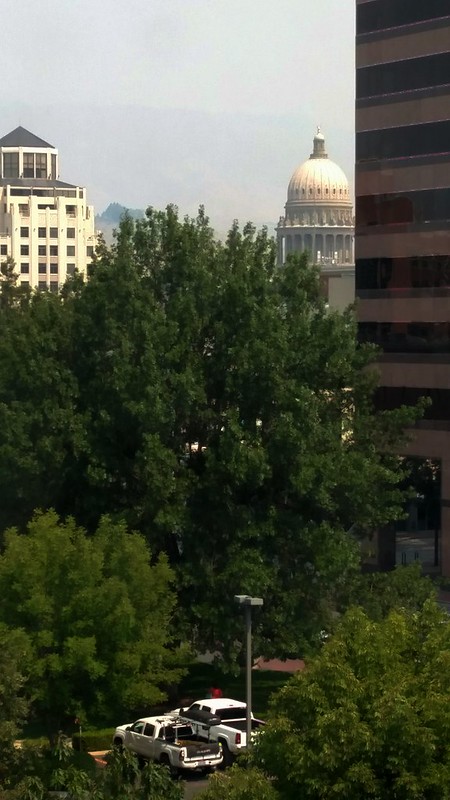 Parking lot in the foreground, state capital in the background. Basically, this view has got it all.

Tonight! I am at the Boise Downtown Library! (I understand it has an exclamation point in its name) at 7pm, with the event sponsored by The Rediscovered Bookstore. I’m very excited, because this is my first time in Boise and my first time in Idaho. So I hope you’ll come out and welcome me to your state and city.

Tomorrow and Saturday: Sasquan bound! Here’s my schedule there in case you missed it earlier. I sincerely hope it is not consumed by fire before I arrive. 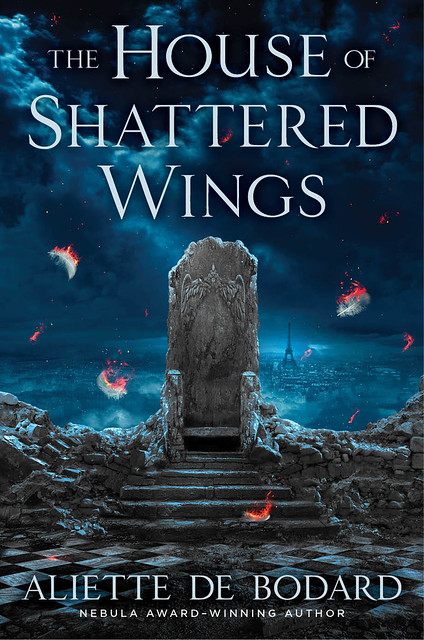 Aliette De Bodard’s Big Idea piece for The House of Shattered Wings may have the best first line of any Big Idea piece yet. That’s all I’m going to say. Get to reading.

My novel didn’t come together until I nuked Paris.

After I finished Obsidian and Blood, my trilogy of Aztec noir fantasies, I was a bit uncertain as to what to write. I finally settled on a urban fantasy set in Paris: I’d always wanted to tackle magic in a more modern setting, and Paris, as a city I’d lived in or around for years, felt like a natural candidate.

The novel, though, never really came alive for me.  I went through several drafts with increasing degrees of frustration–and finally realised that what I needed was better worldbuilding. My intended setting, of a 21st Century with magicians’ families fighting each other for power, had never really convinced me; because I felt, deep down, that the presence of magic should have a bigger effect on the city and its people.

At the same time, I was also taking the novel further back in time, to the 19th/early 20th Century, for a more old-fashioned feel. I was therefore reading a lot of books from that time period, all carefully set against the devastation wrought by WWI. And that’s when I realised that what I really needed was a magical equivalent of this–one whose effects wouldn’t so easily be shaken off. The kind of conflagration that still left the city devastated and bobby-trapped with spells, decades later. A war between factions that had grown too arrogant and powerful and tired of being at each other’s throats–except, of course, that even after the war they’d still be fighting each other on battlefields of intrigues and politics and magical influence…

Yup, that sounded about right.

It turned out that nuking a city was harder than I’d thought. First, I needed a good idea of what life had been before the war: not only to assess what had been lost, but because my post-war society would be clinging to the idea of a golden age before the war, and modelling itself on its memories of it.

My pre-war society differed massively from the actual historical one, because it had Fallen angels–ageless and immortal beings who, with their talent for magic, naturally gravitated to positions of power. And it also had magical factions: the Houses, a quasi-feudal network of protections and obligations that turned into impregnable fortresses after the war. I imagined them as a loose cross between the Houses in Steven Brust’s Vlad Taltos series and the Chaosian Houses in Zelazny’s Amber; and I spent a lot of time coming up with their various characteristics, from philosophy to coats of arms and major magicians (among which was Lucifer Morningstar, because where would be the fun of Fallen angels without him?)

Second, I needed a good idea of the geography of the city, past and present. There I was fortunate, because I could do most of my research by walking and going to local libraries. In particular, I decided that the major focus of the narration, House Silverspires, would hold Ile de la Cité, one of the islands in the centre of Paris. I had to research a bit, in order to get an idea of the lay of the land before I completely nuked said land. By the time I was done, most of the island’s monuments were destroyed, Notre-Dame was ruins open to the sky, and the neighbouring Seine had become a dark and dangerous river, whose tendrils would snatch the unwary from bridges and quays.  Fun times!

Once I was reasonably confident of my Ile de la Cité, I extended the devastation further, into the rest of Paris. Some areas would be under the sway of Houses and enjoy a modicum of safety and resources, and others would be Houseless–in varying degrees of distress and poverty, ranging from lower middle class to working class, to areas beset by gangs of roving, starving youths who fought for scraps of food and magic.

As I delved deeper into this new, odd and bleak world and its politics of survival,  understood immediately that I’d been entirely right: this was something I felt passionate about, something that came alive for me when I was writing about it and begged to be explored further with every new chapter. This was the book I really, badly needed to write.

And that is how I ended up writing The House of Shattered Wings, and setting it in a universe that felt much more engrossing to me than the one of my abortive urban fantasy. I hope I managed to get some of that fire across in the book!