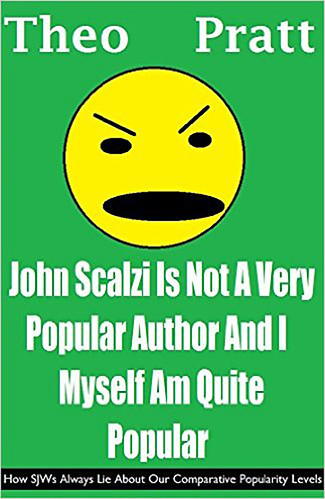 Now we are going for:

STRETCH GOAL: If the donations to Con or Bust reach $10,000 by 11:59 (Eastern) Sunday, August 30, 2015, I will commission or write a ditty with the title “John Scalzi is Not Very Popular,” in which my various perfidies and shortcomings are to be enumerated — in song! You know you want this to happen. So keep donating!

And now, the previous version of this entry, which explains everything prior to the update:

Short version: To benefit Con or Bust, a charity which helps fans of color attend science fiction and fantasy conventions, I will make an audio version of John Scalzi Is Not A Very Popular Author And I Myself Am Quite Popular: How SJWs Always Lie About Our Comparative Popularity Levels, a parody of an actual book by a certain obnoxious bigot who is obsessed with me, if $2,500 is raised for Con or Bust by 11:59pm (Eastern), Sunday, August 30, 2015. You can donate to Con or Bust here. To goose the giving, I will gift-match for the first $500 in donations.

Somewhat Less Short Version: So, there’s an obnoxious bigot who is obsessed with me who the other day released a poorly-edited ebook on the subject of “social justice warriors” and how generally horrible they are, and allegedly (as I have not read the work), I am featured in the ebook quite a lot, because, again, the obnoxious bigot who wrote the book is obsessed with me.

So “Theo Pratt” wrote a parody of the ebook, entitled John Scalzi Is Not A Very Popular Author And I Myself Am Quite Popular: How SJWs Always Lie About Our Comparative Popularity Levels. Here’s the writeup on it:

Everyone knows that SJWs always lie, but few know why they lie, or at whose bidding, or for whose benefit. While other books may claim to tell you how to take down the Thought Police, only one book is taking the fight right to the top.

Yes, from the mind that brought you the popular blog feature Sad Puppies Review Books comes this definitive takedown of the internet’s culture of Social Justice as embodied by the man who controls it all:

Read this book to learn everything you need to know about Social Justice Warriors, their tactics, their treachery, their perfidious entryism. Topics include:

* John Scalzi’s blog is not that interesting and no one reads it.

* John Scalzi did not get me, Theophilus Pratt, kicked out of the SFWA.

* John Scalzi’s deal with Tor was not a very good deal.

I love it already.

Basically as soon as its existence was made public, people started asking me to do an audio version of it, because that would be meta, wouldn’t it. And (with the permission of “Theo,” aka Alexandra Erin), I said fine — if doing so could have a positive benefit. In this case, raising money for Con or Bust, a charity which works to bring fans of color to science fiction and fantasy conventions (and yes, donations are tax-deductible in the US*).

So, the deal: If Con or Bust raises $2,500 by by 11:59pm (Eastern), Sunday, August 30, I will create the audio version of the John Scalzi Is Not A Very Popular Author And I Myself Am Quite Popular. And because I’d actually like to do it, because I think it would be fun and because I like the charity, I will gift-match for the first $500 in donations. You can donate by going here.

No! You’re straight up donating. If we don’t make it to $2.5k, your donation will still go through. So you’ll want to encourage everyone you know to donate so you get the audio. There’s risk! But I suspect we can between us cough up $2.5k in three days, no?

If this succeeds, where will the audio be?

I’ll post it up here. The ebook is fairly short (28 pages) so it’ll be a manageable file size.

How will you accomplish this mighty task?

I have a microphone and recording software. It’s not rocket science.

When will the audio be ready?

Why Con or Bust?

As I said, it’s a worthy charity with admirable goals, and also it’s run by people I know and trust.

Whatever. This is a fun way to help foster diversity in science fiction and fantasy fandom while making fun of a jerk. I’m in.

Thanks and let’s do this thing!

* It’s been suggested that the Carl Brandon Society, under whose umbrella Con or Bust works, let their tax-deductible status lapse. I’ll check into that. That said, Con or Bust is run by Kate Nepveu, who I’ve known for years and who I know has the best of characters. Your money will go to where she says it will. Remember, I gave $500 of my own money. I have no doubt it will be well spent.

222 thoughts on “Charity Drive for Con or Bust: An Audio Version of “John Scalzi Is Not A Very Popular Author And I Myself Am Quite Popular,” Read by Me”