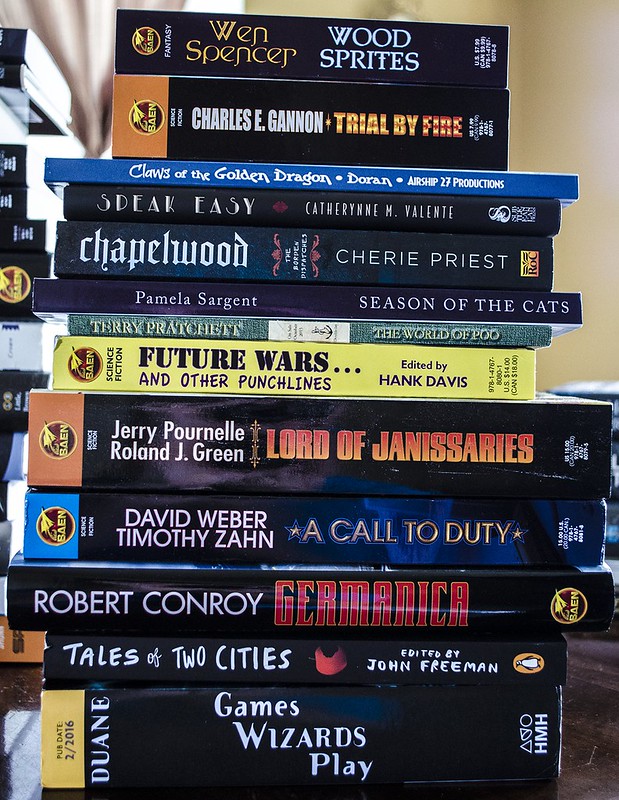 And now I’m caught up with the new books and ARCs that came in while I was on tour! See something you like here? Tell me about it in the comments.

And if you are in or around Columbus tomorrow, remember that I am coming to the OSU bookstore for my final tour event.  I’ll be there at 7pm. You could be there too! And as always, remember to bring every single person you’ve ever met in your life. Thank you.

I’ve had a few people express a desire for an open thread here to discuss this year’s Hugo Awards, to touch on some topics I haven’t specifically addressed; separately, Charles Gannon, who was nominated for the Nebula year, and was just below the cutoff for the Hugo Best Novel award this year, noted something I said in a previous entry about his work and had some thoughts he wanted to post. In both cases I thought it would be useful to give space for folks to comment and discuss, before we (quite properly!) put the Hugos to bed for another season.

So: Here you are, an open thread for discussion whatever you like about the Hugo Awards this year, with Gannon’s long-but-worth-the-read piece in the lead-off comment position. Agree, disagree, add your own thoughts, careen off the thoughts of others, it’s all good.

That said: Remember the comment policy here and keep it wholly; while my plan is to keep my own commenting to a bare minimum in order to let folks have room to discuss, I won’t hesitate to wade in to Mallet people getting out of line. Be polite and respectful to each other and keep the frothing down to a bare minimum, please. I thank you in advance for your cooperation.

Now then. Last call for Hugo Award 2015 thoughts and feelings. Don’t be shy, step up and let’s hear what you have to say. 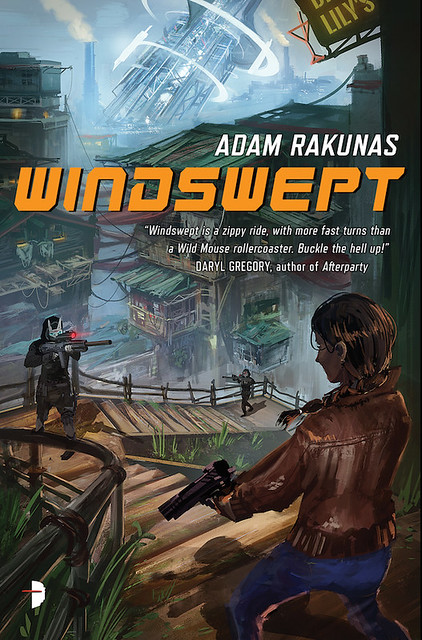 Pineapple juice in paradise inspires science fiction! That’s the first thing you need to know about Windswept and its author Adam Rakunas. But if you would like to know more — and you do! — Rakunas goes into further detail below.

It started with a bar.

I was in Hawaii to officiate a wedding, and I had arrived two hours before the rehearsal dinner was supposed to start. We were meeting in a hotel restaurant in Waikiki, and the open-roof bar had a marvelous view of the Pacific Ocean. It was also crammed to the gills with tourists, just like me. Well, not just like me, because I was wearing a suit. Everyone else wore shorts and sunburns, including the cover band and the bartenders.

I looked around, drinking my pineapple juice and wondering: where did everyone come from? Not just the tourists, but the people who worked at this hotel bar. What brought them here? What made them stay? What did they do to make ends meet?

That idea bumped into a story from Carrie Sundra, a college friend who grew up in the US Virgin Islands. When Carrie she was a kid, some tech company tried to set up shop in the VI. I can see the pitch meeting now: “The Islands are beautiful! Our workers will be so happy and productive, and we’ll be a roaring success!”

It was a not a success, roaring or otherwise. The workers were on Island Time, which meant they would get around to stuff when they got around to it. They weren’t lazy. They were just relaxed. The tech company was not relaxed, because it relied on things like schedules and deadlines and people getting to work when they were supposed to. After a year, they had to admit defeat and move to some place where they had a little more control over their employees. The people on the island shrugged and went back to their lives.

I kept rolling those thoughts together as the band murdered “Hotel California” and the bartender brought me more pineapple juice. If you lived in an amazing place, would you get anything done? What would motivate you beyond your basic needs? What would you do all day?

The answer hit me: you’d hustle until you didn’t have to.

And I don’t mean “hustle” as in “running scams” (even though some people would certainly find their calling in the time-honored tradition of ripping off suckers). I mean you would work like mad for a short period of time until you had earned enough to cover your nut. Then you’d travel or write a book or spend your days contemplating your navel, secure in the knowledge that you wouldn’t have to go back to work until you had to. If you were frugal, you could go months, maybe years, without having to seek gainful employment.

But you’d still like to have things like fresh food and clean water and the occasional untainted antibiotic. People need food and medicines, and those come from long supply chains that rely on a whole lot of people and expertise. Even if someone invents replicators and Med-O-Tron 3000s, those machines will need people to fix them. At least, until someone invents AIs to do all our work, though those AIs will probably also need someone to keep them in tune. Our level of civilization requires work, and someone’s got to do it. And that someone would probably want to spend as much free time as possible in a bar as nice as the one I was in, albeit one with much lower prices.

I pulled my phone and my battered Bluetooth keyboard out of my jacket and started writing about a woman who had left her rat race job to come to paradise, even though she still had to work. Everyone still had to work, because this was the broken-down future. The only way to get by was hustling. What was her hustle? What did she want? Who was she? What would she drink? I sipped more pineapple juice, and, by the time the dinner party arrived, I had met the character who would become Padma Mehta. Now it’s your turn.