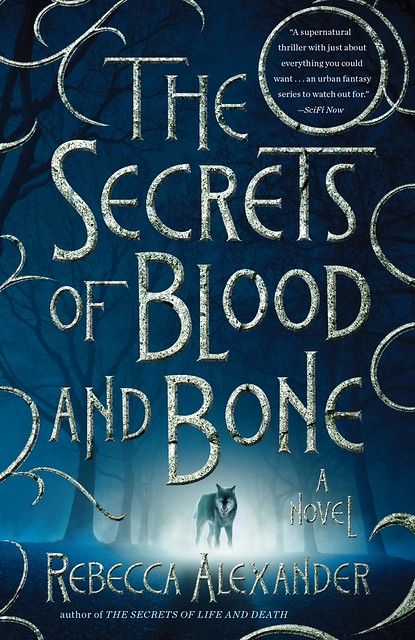 Writing can be an adventure or an escape, and it can also be a way of dealing with events around you, and to explore what they mean and do. Ask author Rebecca Alexander, author of The Secrets of Blood and Bone. She’ll tell you. And does, just below.

Ten years before I began working on the Secrets trilogy, I dealt with a number of personal losses, and death was a force of nature that I couldn’t understand.  I decided to explore the “big idea” of death through my writing. As a result, most of my main characters are poised on the edge of death, like people often are after desperate illness or trauma. Only in my books, that precarious state is actually connected to the magic of 16th century sorcerers like John Dee, Elizabeth Báthory and Edward Kelley, which modern day practitioners use to artificially extend their lives on “borrowed time.”

I started The Secrets of Life and Death (the first book in the trilogy) a dozen times, trying to find my central protagonist Jackdaw’s character. Jackdaw was balanced on that edge between death and the magic that keeps her alive, sustained by an ancient, bloody ritual but unable to truly live. She stayed in the shadows, afraid to get too close to anyone (besides her trusty wolf-dog) in case they found out about her past, and so in some ways it was as though she was already dead. Now, in The Secrets of Blood and Bone, she has decided to really live. She’s looking after Sadie, a feisty teenager, and she’s begun to fall in love with her scholarly friend Felix. In living a fuller life, her personality emerges to a much stronger degree than ever before.  I found I loved her loyalty and compassion, her warrior instinct. Felix is the brains of the group but Jackdaw’s the hero.

My ideas for the life-extending magic that Jackdaw and other’s use first sprung from my research into the Elizabethan alchemist Dr. John Dee. Dee was a remarkable intellectual, widely published in mathematics, astrology—and the ‘science’ of magic. As faith in religion had waned, the earliest books of science included what we would now think of as magic—alchemy, reanimating corpses and creating life. According to John Dee, he had succeeded in raising the spirits of the dead to tell him about the nature of death. I found John Dee’s necromancy experiments in his books about magic, which ultimately led me to his contemporary Elizabeth Báthory, a Hungarian noble who is reputed to have killed dozens if not hundreds of young girls—all in order to push back ageing and death.

When Dee’s trickster associate Edward Kelley proved more interesting than Dee himself, I started writing from Kelley’s point of view, explaining the magical systems revealed from their channeling angels, as well as consulting many of the other sorcerers and alchemists in Europe.  They travelled through Poland and into Transylvania. Here the landscape was influenced by Bram Stoker’s Dracula, one of my favorite books. In Eastern Europe at the time, death was difficult to define precisely—you were only completely dead when your corpse had a stake through its heart and your head was cut off.

The magic that evolved from Dee’s and others’ writings used sigils and signs, and mathematical equations that they believed evoked aspects of angels. They sought to save people who were dying, and if their magic worked I think people would still try to find that knowledge. In fact, wouldn’t pharmaceutical companies be interested (including the one run by a centuries-old Elizabeth Báthory)? By the time I wrote The Secrets of Blood and Bone I knew Jack, Sadie, and Felix well enough to test their relationships with each other and with the magic they’ve used, and to bring Edward Kelley face to face with the consequences of his actions in the first book. Re-animating the dead has consequences, for the revenant and those around them.

With The Secrets of Life and Death I played with the idea of being dead/undead at the same time, and in The Secrets of Blood and Bone I explore the idea that people could access a more savage, primal version of themselves as a way to fight against this binary and try to stay alive. Years ago, when my two surviving children and I fled to an island after a family disaster, the only house I could afford had a garden that was growing into the walls itself. That green, brooding inspection through every window of the house left a mark, and I re-invented the garden as a character.

When I wrote the trilogy, we were living in a house high up a hillside, surrounded by a couple of acres of wilderness filled with foxes, deer and badgers. Brambles grew under the back door and trees leaned in to the bedroom windows to tap leaves on the panes. The constant cawing of rooks, jackdaws and crows all made it into the book. They became the soundtrack to the story, very alive yet so associated with death.