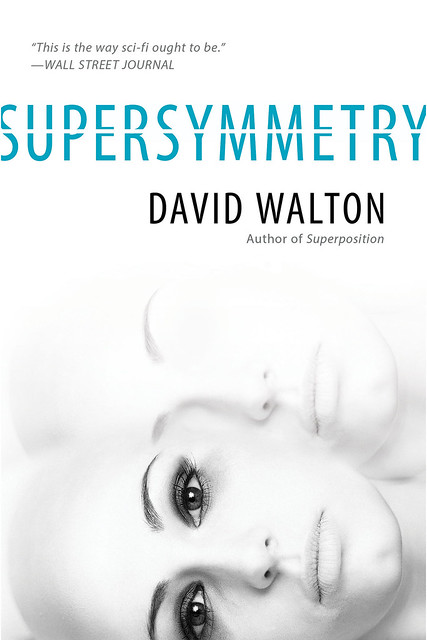 And now, for your Labor Day delight, here’s David Walton and his book Supersymmetry, explaining how what appears like a detail in one book can become a big idea in the sequel.

Only five months ago, John was kind enough to let me chat here about the Big Idea for Superposition, my quantum physics murder mystery that came out in April.  I compared its mind-twisting layers to the film Inception, and described the real-life jury trial I was on (faked death! Russian mobsters!) that prompted the idea in the first place.  I told you about a technology based on the crazy properties of quantum physics that allowed objects to jump through walls, bullets to diffract, and people to exist in more than one place at a time.

But Superposition was a complete story, a stand-alone novel.  That Big Idea has already been told.  So why am I here, only five months later, telling you about a sequel?

Easy.  At the very end of Superposition, in the very last scene, I left behind an Idea.  The Idea was so fascinating to me, I couldn’t just leave it alone.  One of the characters—a teenage girl named Alessandra—ended the book split in two, with two alternate versions of herself alive at the same time.  It wasn’t a loose end, exactly.  It gave her a twin, a friend who could really understand her, something she had always wanted.  The story was complete.  I hadn’t intended to write a second book.  But I couldn’t let that idea go.

It’s something we can all relate to, at some level.  We wonder what would have happened to if we’d chosen a different school, a different job, a different spouse.  How would our lives be changed?  Would we even be the same person?

I wondered: What would it be like to grow up with a sister who was you, but not you?  A twin, of sorts, but one who, until the age of fourteen, had been the same person?  I imagined both Alessandras looking across the breakfast table every day and seeing the girl each would have been if her life had gone differently at just one point.  How would that affect how they viewed themselves?  Would they get along?  Memories are notoriously malleable . . . what if they started remembering things differently?  What kinds of different choices might they make?

And of course, the biggest question of all… what would happen if the probability wave resolved and they became one person again?

Supersymmetry begins fifteen years after the end of Superposition, when the girls—Alex and Sandra—are twenty-nine, leading two separate lives and following different careers.  Each of them secretly fears that the other is the “real” Alessandra, and that the wave collapse would mean her own annihilation.  Enter Ryan Oronzi, neurotic physicist, with a quantum technology that could make American soldiers invincible in the field.  Before long, the Secretary of Defense is assassinated, it’s Alex who’s holding the gun . . . and her sister is the only person in the world who might believe her.

The story stands alone, so even if you haven’t read Superposition, I hope you’ll give Supersymmetry a try!