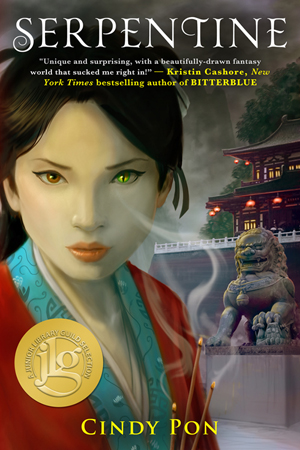 When Cindy Pon turned in her Big Idea for her novel Serpentine, she had titled it “A Guide to Writing Non-Commercial YA Fantasy,” with the notation “Maybe the titles of this post is a little tongue-in-cheek, but not entirely.” Why would she think that? Read on for the explanation.

When I was pitching my debut novel, Silver Phoenix in 2008, one of the first editors I met at a local conference read twelve pages and said two things that stuck with me. First: This reads like Crouching, Tiger crossed with The Joy Luck Club. Why is it fantasy? Second: Asian fantasy doesn’t sell.

My internal thought to the first was: But doesn’t Crouching, Tiger have fantastical elements? And why is he saying it like this is a bad thing? My thought to the second was: Oh.

I immigrated to the United States from Taiwan when I was six years old, which means I learned English as a second language. I remember vividly my first grade teacher having to write my name onto the chalkboard because I didn’t know the alphabet. I remember staying home to work on my English while I watched the neighborhood kids play outside. So, when sometime in the third grade I began reading–and reading a lot–it seemed as if magical worlds had been opened to me. I had worked so hard to gain access to these story treasures!

I fell in love with books, and fantasy was one of my favorite genres. It wasn’t until I was an adult that I realized I had never seen a character who looked like me in any of the fantasy novels I had read. That’s why I wrote Silver Phoenix.

It was incredibly disheartening to be told by the first professional editor I’d met as a budding writer: Don’t bother. No one wants this.

Well, Silver Phoenix did sell to Greenwillow Books, and it was published in 2009, a difficult time in publishing, and an even more challenging one for debut authors. That year, my novel was the only Asian-inspired YA fantasy released by a major publisher, and now, six years later, I can still count on one hand the number that are released any given year. There have been strides, but not many.

When I began writing Serpentine, which will be published on Sept. 8, I knew it was a risk. I was writing another fantasy set in my fictitious Kingdom of Xia when the sales numbers for my other books had not been strong. But if you know me personally, you know that no one tells me what to or not to do, and I am a stubborn-headed goat. When I do find a story idea, I always write that novel. Serpentine was on submission for two years, with a handful of editors giving very positive feedback, but asking to see something “entirely different” from me instead.

I was ready to self-publish when Serpentine and its sequel were acquired by Month9Books, and it has been a fantastic journey with this amazing small press. But those two years on submission gave me time to realize all the things that made Serpentine “not commercial” by the standards of what is popular in YA fantasy’s current market.

My novels feature casts that are almost entirely Asian, which is very rarely seen in YA books. I’ve also come to realize that the setting itself, inspired by ancient China, is severely othered by the average Western reader, even those who are enthusiastic fantasy readers. Ancient China is more foreign and seen as less commercial than Mars or the moon.

I’m very familiar with fantasy’s love for royalty, the princes and princesses who must be smart, brave, and persevere to save their kingdoms. I have read and loved many of these fantasy stories, but have never been drawn to writing them myself. My heroines have always been underdogs, and it is no different in Serpentine. Orphaned at birth, the main character Skybright has been a handmaid and companion to her mistress her entire life. She is pragmatic and hardworking, until one night she wakes to find the lower half of her body has morphed into a long serpentine coil. This changes what she thought she knew about herself and her life forever.

I knew from the outset that I wanted a strong female friendship to be the focus of Serpentine. It was something that was lacking in my Phoenix novels, but also, it was a tribute to all the fabulous women friends I have in my own life, who have boosted and encouraged me in my writing career. And although there is a strong romance between Skybright and a boy she meets, I do believe the core of the story is the friendship between Skybright and Zhen Ni.

I think the true irony is that I always think I am writing to market. Shapeshifters are a popular staple in fantasy, both urban and traditional, and are part of the mythos and lore of many cultures worldwide. But one of my critique readers  found the idea of a serpent demon heroine “gross”, and an editor said that despite my beautiful storytelling, a half serpent with a forked tongue would be a “tough sell” to the YA readership. Well, damn. Why can I never just fit nicely in the YA Fantasy Expectations Box? I blame my fascination with the idea of monstrous beauties, as well as the Greek mythology of Medusa, who was a beautiful woman herself before she was changed into a monster.

As for whether or not Asian fantasy sells, I think that it can, if these titles are given the same strong publicity and marketing push as other Western-inspired YA fantasies. I have yet to see this happen, and when there is strong buzz from the big publishers, it has often been for an Asian-inspired fantasy written by a white author.

So I’m especially grateful for the opportunity to talk about Serpentine. And if you decide to take a chance with a non-commercial YA fantasy, reader, I hope you enjoy Serpentine.