Actually, today it’s not that I didn’t have brain capability, it’s just that it didn’t last past about 1:30pm. I could actually feel my brain shutting down! It was amazing.

Anyway, how are you today? 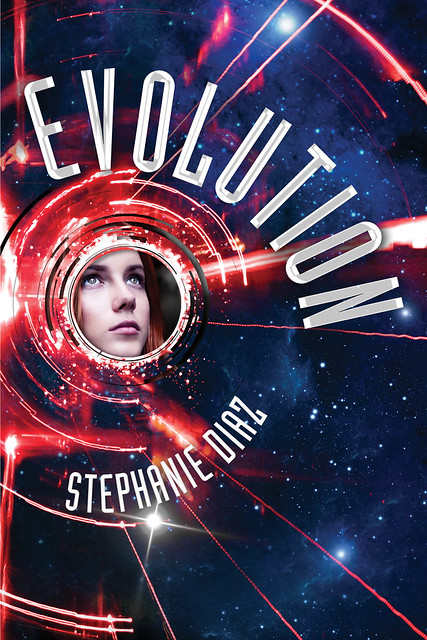 Next time you can, go look at the moon. Pretty innocuous, right? Not for Stephanie Diaz and her Extraction series of books, of which Evolution is the latest installment.

Now I’m twenty-two, and I still dream of someday boarding a space ship and traversing the outermost reaches of the galaxy. Yet in my first eighteen years of scribbling stories in notebooks and on school papers, it never occurred to me to try writing a science fiction story. I think I sort of figured I didn’t know enough science, or maybe I simply didn’t have an intriguing enough plot for a story set in space. Until the idea for the Extraction series (which ends with the upcoming Evolution) fell into my head.

Ever since reading The Hunger Games, I’d been toying with the idea of writing a dystopian novel. I’ve always loved exploring the dark side of humanity, the situations that lead individuals to make impossible choices of death and destruction. But with the market so flooded with dystopian works, I knew I needed something to help my story stand out from the rest. The Star Wars/Firefly geek inside me tugged me in the direction of space and galactic wars.

But it really all started with a moon.

Earth’s moon is pretty cool. It looks super lovely and it works with the sun to create ocean tides, which is great. But one day I started wondering how the world would be different if the moon had a bigger effect on our day-to-day lives—and not just any effect, but a deadly one.

What if the moon were poisonous?

And so Kiel was born, a planet somewhere out in the far-off reaches of the universe. A planet orbited by a giant moon with acid leaking off its surface and swirling down into the atmosphere of Kiel, threatening the lives of the planet’s citizens. Those citizens with more wealth and privilege were able to live in societies underground, while the unprivileged working class lived in concentration camps closer to the Surface, and fought to prove they deserved an escape. I dropped a spunky sixteen-year-old girl on the most dangerous part of the planet and wove the story around her, following her from her escape of one of the concentration camps to her realization that everything she thought she knew about her home world was wrong—including the dangers of the moon.

When I started writing Extraction, I honestly didn’t know where the story was going. But about halfway through I realized there was a twist in store that opened up the possibilities for sequels. See, I’d read other science fiction stories about planets where humans suffered from trauma due to the sun’s radiation, or where supernova exploded and led to an end of a civilization, but they were all a result of natural phenomena. I decided it would be most interesting if the poisonous moon in my story weren’t something natural at all, but a weapon of war. And hardly anyone on Kiel knows it.

The first and second books of the series, Extraction and Rebellion, explore the massive cover up in play on the planet Kiel, and follow Clementine’s attempts with a rebel group to sabotage the leader at the head of the cover up. In Evolution, the warriors behind the moon’s weaponization appear on the stage and the final showdown begins, complete with space ships and aliens and a galactic war on the scale I always wanted.

Extraction started with a poisonous moon. How the story ends…well, you’ll have to read Evolution to find out.

As for me, I’ll probably never get to board a space ship and have adventures on a planet far, far away, but the Extraction series let me have adventures through Clementine and the rest of her rebel crew. And that’s pretty shiny.