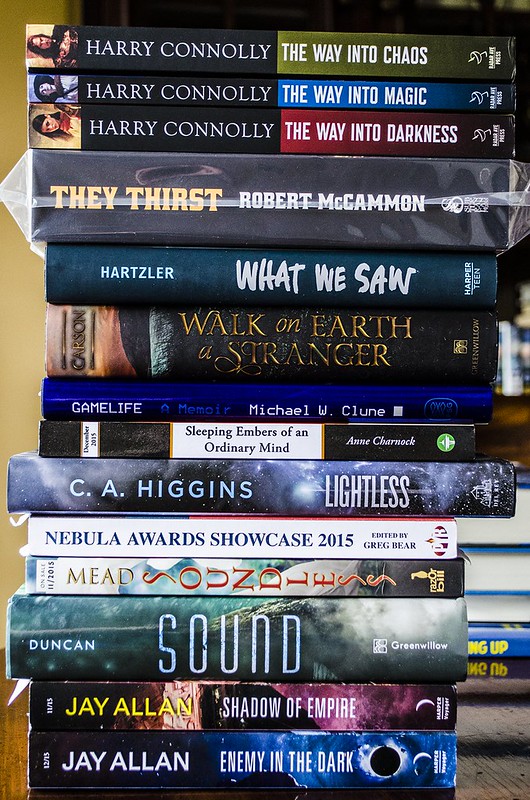 As we once again head into the weekend, here’s a new stack of book and ARCs that have come to the Scalzi Compound this week. What speaks to you in this stack? Tell me in the comments! 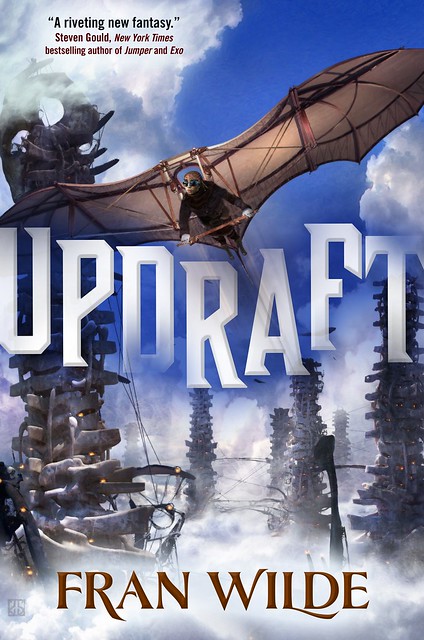 Updraft is a world of cloud and bone, songs and silence, where danger hides on the wind and secrets bind a city. Author Fran Wilde is here to talk about the book, and about finding her voice in a wind tunnel.

At its heart, Updraft is about speaking, about being heard, and — in turn — about hearing others; it is about challenging, vocally, secrets, assumptions, and established beliefs. It is about singing and memory; about argument and politics.

(Updraft is also about monsters, in case you’re worried that it’s all talk. Invisible monsters that you don’t see until their mouths open right in front of you in the sky. And it’s about gravity and wind. Two more kinds of monsters. But the big idea is voice.)

When I began to write Updraft, it was as a short story called “Bone Arrow, Glass Tooth,” where two people battled for the right to speak.

The short story was all action and eye-candy. Not just the human kind of action – I like building worlds, and “Bone Arrow, Glass Tooth,” featured an entire world pre-crammed into five thousand words. I do that a lot. Gets crowded in there.

This story also had a number of questions left unanswered: what kind of society would set its citizens against each other like this? What are the real stakes, beyond this current challenge? Who the heck are these people, and where did that wind tunnel come from?

Answering those questions gave me Kirit Densira, a young woman still living with her birth family, and happy there. Kirit’s aspires to become a renowned trader — an important job in a city of towers of living bone that rise far above the clouds. But before she can do so, Kirit breaks a law, and must pay the consequences… even though she does everything in her power to get past them.

Answering the questions raised by the short story also gave me a city that utters discord in its own way, and a citizenry desperate to appease it.

There are many voices in Updraft, and I realized early on that there were many stories I could tell, from many different perspectives.

I chose among characters one whose voice resonated — roughly — and who sometimes spoke out of turn; who learning the ins-and-outs of negotiation as we all have to, learning and re-learning.

For Updraft, I didn’t want an expert. I didn’t seek someone who knew their voice and could use it perfectly. I wanted rough-edged and reaching. Someone who thought they were prepared, that they knew all the right words, but who didn’t, not yet.

For that character to find strength in their voice, to learn to control that strength, to learn when to shout, and when to stay silent: That’s the Big Idea.