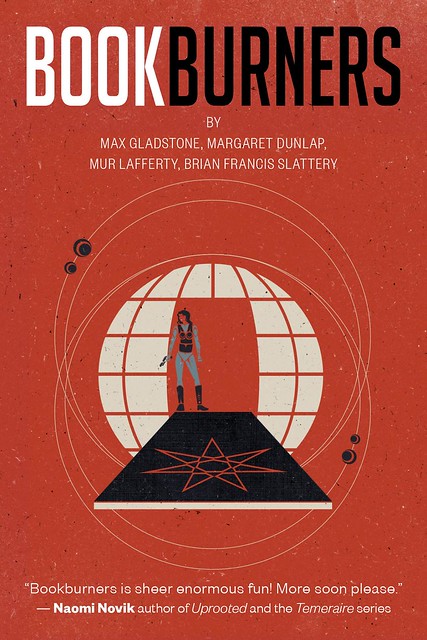 There’s a new publisher called Serial Box, which has this wacky idea that maybe, just maybe, you’ll enjoy fiction in serialized form — stories with new, regular installments that keep you on the edge of your seat, waiting to find out what happens next. It’s an idea that goes back to the times of Dickens and Dostoevsky, and seems ripe for a digital renaissance. In today’s Big Idea, Max Gladstone, one of the writers of Serial Box’s first series Bookburners, talks a bit about the series and why this story works well in this particular format.

Bookburners makes me a bit uncomfortable.

Consider: our world’s a small island in a sea of weirder stuff.  Sometimes monsters crawl up the beach from the water.  Sometimes springs and fountains of weirdness erupt from the sand.  People drown.  People get eaten.  People turn strange.  Of course there would be groups dedicated to managing the weirdness.  Not destroying it—how bloodthirsty can you get?  No, just—taking strange things and putting them in a box for a while.  Studying them.  Deploying top men.

All of which seems reasonable enough on the surface.  But, peer deeper.  Once weirdness is contained, studying it safely requires immense resources—and after containment, said weirdness isn’t, by definition, an urgent problem.  Your archive of the weird develops piles of barely catalogued cruft.  “Man-eating quarto, c. 1730, France.  Title unknown.”  You’re protecting people on the day to day—but you sit on top of vast resources that could transform the world.  If you just picked them up.  Used them.  Listened to them.

The archives whisper to you at night.

Bookburners is a supernatural procedural about agents working for the Vatican running around the world trying to save people from being murdered, possessed, transformed, and otherwise messed with by magic—if you like Warehouse 13, Shadow Unit, the X-Files, the Men in Black movies, odds are you’re ready to pick up what we’re putting down, dig what we’re shoveling, etc.  But the notion of “defending the earth from the scum of the multiverse” has always sat oddly with me.  Why hide the cool stuff?  Why not let things get crazy?

A few possible answers: “It’s for the public good.”  To which: I mean, possibly.  But our species doesn’t have a great history with people in power deciding what’s for the public good.  “People aren’t ready for this knowledge.”  Which seems a bit… disrespectful, to be honest, though, given human history of dealing with outsiders, it might be accurate.  “The cool stuff kills people.”  Hard to argue there—though humans do a fine job of killing themselves without magic.  That said I’m willing to allow there’s a difference between killing ourselves and being turned inside out by monsters.  “We’ve always done it that way.”

Charles Stross has observed that organizations which outlive their founders tend to do so because their focus shifts from their original mission, to self-preservation.  The Men in Black, as an institution, care primarily about the upkeep of the Men in Black.  Which is not to say that individual Men in individual Black don’t care about protecting the earth from the scum of etc.  Or even about reforming the system of which they’re a part!  But systems are big, and change slowly.

We bear histories on our backs.  As we go to school, as we enter the world and make friends and vote and serve, we’re beneficiaries and victims both of an awful lot of choices, some of which—many of which—we’d have made differently.  Checking out is an option.  Pretending we can ignore history is another.  But history has a nasty tendency to hunt us down wherever we run, and rise from whatever grave in which we try to bury it.

Our main characters in Bookburners got into the fight for personal reasons—they’ve been hurt by magic; they’ve lost friends and family; they want to help people.  Some of them are more convinced the right approach to magic is locking it away; some aren’t.  They’re working within an organization that’s made a lot of decisions about how to manage magic in the world, some of which are more defensible, some less.  How can they deal with that?  Reform?  Revolution?  Doing the best they can from the inside?

The more I thought about this idea, the more I realized that what made Bookburners uncomfortable for me also made it valuable.  Sal and Grace and Liam and Menchú and Asanti are all making the same choices we all make, moment to moment—how to do things we care about in a complicated, and probably compromised, system.

This angle also makes Bookburners an ideal serial story, since serials support more expansive storytelling.  An episode can focus on one side of Our Heroes’ mission, pose one sort of moral question, while the next episode takes an entirely different tactic.  Having a room full of writers—Mur Lafferty, Margaret Dunlap, Brian Slatterly, and myself—contributing episodes also helps, since everyone has their own perspective on the characters and their compromises.  We talk these issues out among ourselves, and then, since we’re all storytellers, we rework those conversations on the page.

Join us for the ride.