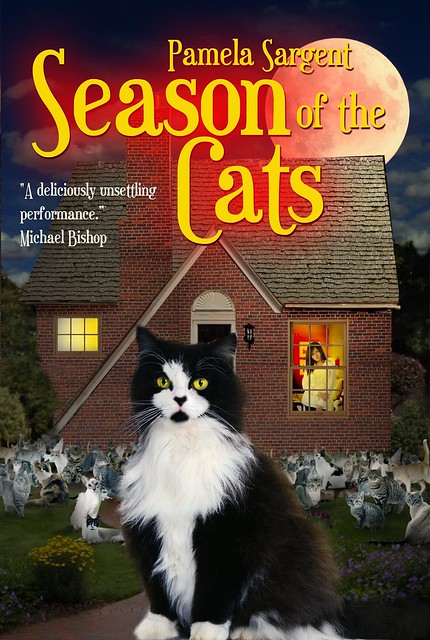 It’s no surprise that writers live in their own worlds, and occasionally let you see those worlds in our books. But as Pamela Sargent explains, with regard to her novel Season of the Cats, sometimes before we can let you visit our worlds, we have to… tidy up a bit.

By the time I conjured up the central idea for Season of the Cats, I had wrestled with a number of “big ideas” as a novelist, among them human immortality, the life and conquests of Genghis Khan, and the terraforming of Venus. Those undoubtedly qualify as big ideas, but the central situation in Season of the Cats concerns a somewhat dysfunctional early twenty-first century couple who have dreamed up an imaginary utopia of cats. Is that a big idea? Perhaps it is if that imagined world, appropriately dubbed Catalonia and consisting of a quite civilized feline society, leaks into the so-called “real” one and threatens the couple’s marriage, their sanity, and possibly their lives.

But when I first started playing with this novel, more than two decades of being a published writer, along with personal and professional setbacks, had led me into a deadly morass of self-doubt, burn-out, depression, and writer’s block. (The euphemistic terms for this state are “being on hiatus” and “lying fallow.”) The cure that I found for myself, partly by accident and partly through economic necessity, was writing on a smaller scale, concentrating mostly on short fiction and also honing my craft by collaborating on a few Star Trek novels with my partner in life, George Zebrowski. The rest of the cure, which came a little later, was writing the first part of what became Season of the Cats, with no idea of where the story was going or what, if anything, would come of it. I needed an escape during some dark times and a way of entertaining myself while trying to rediscover the joy and satisfaction the act of writing and shaping a story had once brought to me.

I began with the two central characters, Gena and Don, who lived in a place that resembled our former neighborhood, and their cat Vladimir, who was modeled on our beloved Spencer, a small long-haired tuxedo cat who lived a long and largely happy life of seventeen years before finally succumbing to kidney failure. I indulged myself in this cheery fable, making light of Gena and Don’s troubles in order to escape my own while having no idea of where the story was going or any thought of publication. Any writer knows that if a story doesn’t interest you, then it’s unlikely to interest any reader, but here I was so intent on entertaining myself that I had completely forgotten about any other reader. By the time it occurred to me that maybe, with a manuscript in hand, it might make sense to try to get the novel published, a couple of more objective readers had to give me the bad news, namely that the story I’d found so diverting was a self-indulgent and unappealing mess.

You can write and publish for a lifetime and still make mistakes, still have to relearn what you thought you already knew. I set this novel aside to write other work and returned to it later, always a good idea if a piece of writing isn’t working; the passage of time has a way of illuminating your earlier errors. And when I did my rewriting, I followed a method the late science fiction writer Frederik Pohl had recommended, which may sound drastic to anyone young enough to have never used a typewriter: Fred’s advice was to print out the text, destroy any electronic files, and begin rewriting with only your printed text as a guide. Otherwise, he told me, you get lazy and just do touch-ups instead of a complete overhaul.

He was right. My own overhaul, which involved several of these drastic rewrites, included reworking the plot, digging into the darker aspects of the story that I’d avoided before, among them an entity that threatens several of the main characters, and adding details, drawing on my own experience as a foot soldier in a local political campaign and at a disagreeable temporary day job, that yielded more interesting plot twists and more desperate situations for my characters. I was still entertaining myself but also keeping the reader in mind. As Fred also put it, “Your reader is some guy in Cleveland at three in the morning,” and that seems as useful an image of a reader as any. Figuratively speaking, we’ve all occasionally been that guy in Cleveland at three in the morning.

Like Gena and Don, I had lost control of my own imagined world and had to face my own struggle, which is obliquely reflected in the pages of Season of the Cats. Whether my characters win or lose their battle is for readers to discover.