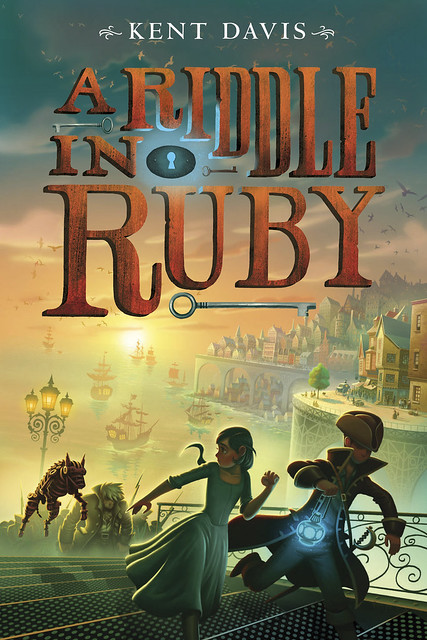 For his Big Idea piece today, Kent Davis explains how a mental image, and some experience writing role-playing games, ended up being the foundation for his novel A Riddle in Ruby.

I had this picture in my head. It clanked around, bumping into the furniture and leaving oil stains on all the brain-curtains. Certainly it wasn’t the most heroic of images, but it hung on, badgering and rattling and poking for days that turned into weeks.

A girl, shoulder-deep in a large whiskey barrel. The girl wears a battered tricorne hat, and the barrel stands atop articulated metal ostrich legs.

Yeah. Random. But somehow charming. And oddly compelling, too. Why a tricorne? Why a barrel? Who is this girl? And what’s the flippin’ deal with the metal ostrich legs? The picture clamored to be explained. It wanted to be lit up. So I tore it apart.

The battered tricorne beckoned first. I’ve always had a thing for the North American colonies, but in the time before the War of Independence. Like, half a century before. Holding for dear life onto the edge of the East coast, rife with both pluck and gumption, pocked with colonialist warts, watching the Age of Reason unfold from the continental kiddie table? That’s my jam. Frontier cultures have a special attraction for me—I live in Montana—and I love the idea that in earlier times the borders of the known world (at least for the Europeans) lay mere miles from isolated little settlements like Philadelphia or New Amsterdam.

Then came the barrel with legs—articulated, gawky, powered by means unknown! The whole contraption gave off more than a whiff of steampunk, but I didn’t want to give up the colonial feel, or the pluck, or the gumption. Besides, the story needed magic, and I was searching for something a bit more exotic than steam. I came to understand, however, that the necessary magic was not the pointy-hatted, wand-ridden, unicorns and elves kind. It required arcane mysteries suited to the beginning of the Enlightenment, practiced not by Gandalf or Glenda, but by the Bacons and Germains and Newtons of that historical moment. What if a kind of science that produced its own miracles could be the magic engine of the story? Like chemistry, for example?

I’m the co-creator of a tabletop RPG that sports a magic system for alchemy, where arcane scientists essentially nudge the laws of chemistry in spectacular and sometimes even miraculous ways. Stone walls change into glass. Frozen lakes puff into clouds of superheated steam. That sort of thing. What if this magic/science manifested in the setting? It would make for a very short walk to the land of antimony ostrich legs.

But this magic wouldn’t exist in a vacuum. It couldn’t help but change the course of history. The ripples spread, and more questions got answered. Applied chemystry—now sporting a sexy “y” instead of its conventional “i”—would quickly allow artisans to leap forward in their manipulation of materials to create great works of chemystral craft, pushing technology and manufacturing forward to levels only seen in our 1800s. Of course, that kind of change would topple all manner of political and economic dominoes, not to mention give rise to an array delectable bonuses: alchemycal automatons, clocklock pistols, cobalt gearbeasts. This nascent world suddenly began to offer up its own ideas! That’s when the dancing around the room began.

However, the final and arguably most important component of this Big Idea remained: the girl.

What kind of hero lives in this chem-driven and slightly batty world? I thought perhaps one built to fit a society on the brink of social revolutions: imperfect, a little bit odd, bold to the point of endangerment, gifted but a touch lost. A scrapper. Her name is Ruby Teach, and she is an apprentice thief, a smuggler’s daughter, and a repository of secrets. She’s thirteen, and she is not the Chosen One of high fantasy. No prophecies have been written about her. A noble lineage is hers neither in public nor in secret. She’s common. She bears a secret, true, but even it does not belong to her. This riddle makes her a sort of carrier. In her words, she’s the baggage.

But she has a mind and a will of her own, and when her world is turned upside down she takes action in courageous, reckless, and sometimes even ridiculous fashion. She acts. She does not wait to be told, and she often spurns the advice of those who think they know better. She wants to discover the truth for herself, even if it hurts. I tried to write a girl that my wife would have loved as a kid, and I tried to write a girl that I would have loved as a kid, one lost in the clanking tinker towns and forbidding frontier forests of the Chemystral Age. I hope your kids might love her, too.

Or you. I mean, you might like her. Sure. Why should the kids get to have all the fun?

So. The tricorne, the ostrich legs, and the girl. That image went the way of many big ideas: dissected, chopped up, and blended into an alchemycal stew far more exciting to me than the original.

By the way, the barrel shows up, too, but the when of it is a surprise. Ruby shouldn’t be the only one who gets to have secrets.