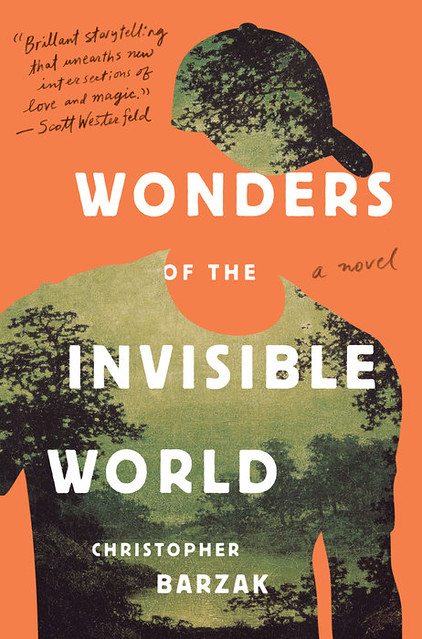 For today’s Big Idea, Christopher Barzak takes you to the family farm and explains how a little bit of his own personal history informs his latest novel, Wonders of the Invisible World.

Wonders of the Invisible World was an attempt to save my family.

My attempt to save my family wasn’t so much to rescue us from an ancestral curse, so much as to rescue us, somehow, from the passage of time, from the way anyone’s family fades over time, as the shadow of mortality grows ever closer, until it eclipses not only individual lives, but the life of a family unit.

I was thirty years old when I began writing this novel. I’m forty now. In between the span of those ten years, I published two other novels and a collection of short stories. I moved to Japan to teach English. I earned an MFA while teaching full time at a university after I returned. For a while, I wasn’t sure if I’d ever clear away enough time and space for a continuous span of concentration I need to complete a novel. But I continued to work on multiple drafts of this book, because it was a story in which I was preserving details from the landscape of my childhood: my grandparents’ farm, where I grew up among a large, extended family that all made their homes either on the farm or nearby it.

No, Wonders of the Invisible World isn’t necessarily about my family. The Barzaks aren’t cursed like the Lockwood family is. But when I was thirty and began trying to write a novel that might capture some of the essence of my family life, it was because, at that point, every time I’d visit my family, I’d see another piece of our shared past fading away. I watched my grandfather unstring the barbed wire fences that outlined his various pastures and orchard. I saw the last tree standing in the orchard cut down. I watched as his remaining stock of cattle were sold off, and I watched as my grandparents’ farmhouse itself, well over a hundred years old now, begin to crumble around them before they themselves passed away in recent years.

The big idea for me was to capture the essence of a way of life, rural and agrarian, before it passed away completely. So the setting of Wonders of the Invisible World is largely based on my family home. The orchard, the creek that flows through it, the pastures and the cornfields. Even the farmhouse in which the Lockwood family lives. I’ve often used the places where I’ve lived for a long period of time as settings for my books, but this time it was more personal, acting as a totem of sorts as I wrote the book.

The big idea, though, that I wanted to capture for the reader, who has no interest in my personal connection to the story necessarily, was to capture the essence of the passage of time, of a young man—seventeen year old Aidan Lockwood—who discovers an ancestral family secret, and in the process of reclaiming memories of his own childhood that have been magically obscured by someone trying to protect him, discovers parts of himself that he’d never known before.

In a lot of ways, discovering one’s family history is a way of discovering yourself. So many things about the formation of our personalities and processes for thinking are determined, to some extent, by the families that create and shape us. Wonders of the Invisible World is a young adult novel, and in this way I felt like the plot I invented reflected, literally, the way a young adult begins to see the members of their family more clearly as they come of age. To see Mom and Dad as more than the role they play as parents. To see grandparents as people who have shaped their own parents. History, at least for me, only came alive as I became a late teenager; and in discovering more about my own family, I felt like I was discovering myself, my place within the story my family inhabits.

Ten years is a long time to work on a novel in stop and go fashion. It wasn’t ideal. It made me question the story every time I came back to it, when some small amount of time for that kind of work became available. I wrote three drafts, threw them all out. Started from scratch on a fourth, and finally found the shape of the story I needed to hold everything I wanted to address inside it. What was the key turning point? Realizing that in order to contain all of the bits and pieces I wanted in the story, I would have to make my protagonist suffer from a spell (a literal one) of forgetfulness, in order for the act of remembering to become a magical event in and of itself.

There are so many more bits of magic in this novel than those I’ve mentioned. There’s a white stag, the specter of a man in a black suit, harbingers of Death, a voice that comes from a dead apple tree, visions and dreams that come to Aidan Lockwood unbidden. It’s a personal story that pushes outward into the epic, encapsulating a hundred years of his family life. I’m not sure if I really did, in the end, manage to save my family by writing this book, much as I tried (perhaps pure memoir would be better for such an act), but I do know that Aidan Lockwood manages to save his. And after ten years of struggling with him throughout his journey, seeing this story contained in the bound pages of a book feels at least a little bit like redemption.

← Last Sunset of the Summer, 2015
eBook Sales and Author Incomes and All That Jazz →