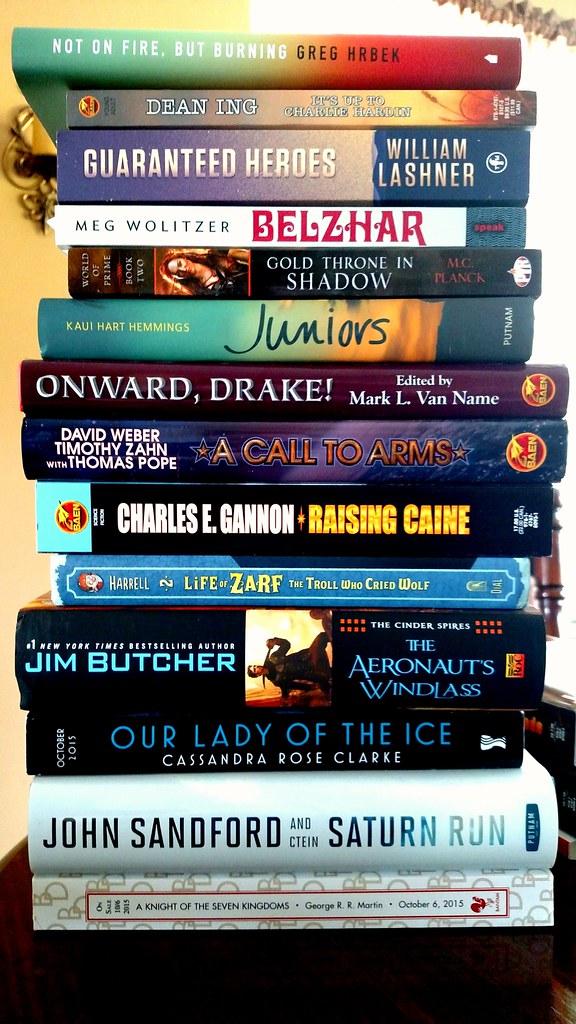 Last weekend of September starting soon, and to see off the month, here’s this lovely stack of new books and ARCs for your delight. What looks good to you? Tell me in the comments! 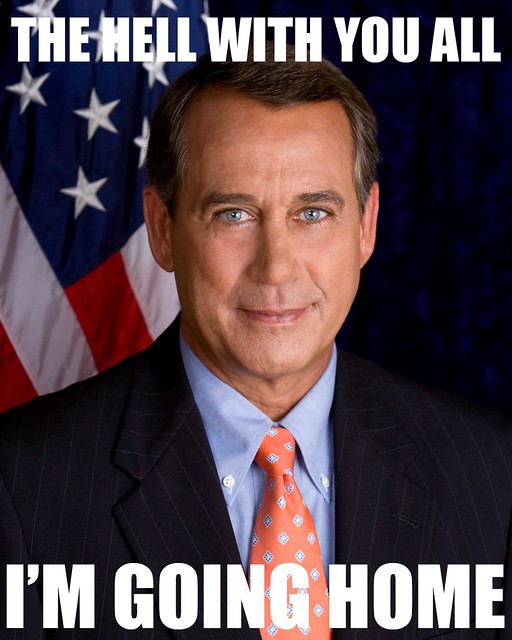 And honestly, can you blame him? He’s had to ride herd on an increasingly dysfunctional GOP Caucus in the House for four years now, a group that sees actually shutting down the government to get its way as just another political tactic. That’s got to have taken its toll on the man, who I believe at his heart does see government needing to be useful, even if he and I have rather different ideas about what “useful” means in this case. It can’t be fun being Speaker of the House these days. There’s less chaos in a kindergarten, and at least when you’re in charge of a kindergarten, when everyone’s cranky, you can make them take a nap.

So now he’s done, or will be soon — he’s resigning at the end of October as I understand it. I’ve seen people wondering if the Pope, who spoke to Congress yesterday and whose presence in Congress Boehner has apparently worked toward for years (ironic he got his wish with this particular pope, but even so), might have been an influence on what seems like a sudden decision to resign. I don’t suspect directly, no. I don’t think the Bishop of Rome pulled him aside and said, “dude, what are you doing? Get out while you can,” but I think Boehner may  have felt that this particular event was a highlight of his tenure and maybe it was time to go out on a high note, and while he was still young enough (he’s 65) to do something else with his life. I think maybe it crystallized his thinking, as in, why not leave now? It’s a valid question.

I don’t think Boehner’s departure from the Speaker position is going to do the House GOP or the GOP in general any good. I suspect whoever replaces him will be to Boehner’s right and more willing to use the House as a bludgeoning tool to get their way, which will be an interesting dynamic coming into an election year, and I use “interesting” in all its connotations. Right now the House GOP is on the verge of shutting down the government over Planned Parenthood; even if they dodge this particular bullet it will likely be by a stop gap measure that means there will likely be another possible government shutdown a few months down the line. The optics of shutting down the government are never good, and it’s better-than-even odds that the next House speaker won’t have the wit to recognize this. We’ll see.

I live in Boehner’s district and I’ll be very interested to see who replaces him, both short- and long-term. Boehner’s been the representative here since 1991 and he’s never gotten less than 61% of the vote (his first election), and there hasn’t been a Democrat in the OH-8 seat since the Depression. This seat is so safe the Democrats didn’t even run someone against him in 2012. Everyone including me assumed that he’d be in that seat until he was rolled out on a gurney. That being the case, I don’t think anyone’s been lurking in the wings. I mean, I’m sure someone is, in some way; I just don’t have the slightest idea who it might be. In one sense it doesn’t matter, since the GOP could run a dead raccoon in this district and it would still get 60% of the vote. But in another sense, well. Boehner was actually a good fit for OH-8, politically: rock-ribbed Republican rather than unhinged reactionary. I’m mildly worried whoever comes in will be more of the latter than the former.

People have jokingly suggested that now would be a fine time for me to enter public service; my response is thanks, no. I have no ambition to be a US Representative, for many reasons, among them that I would have less time for writing and also because while franking privileges are a compelling perk, overall the pay/perks package is not as good as what I get now. Also, the idea that what I would actually be doing with most of my time is begging for money from people who want me to vote their way, i.e., institutionalized bribe-seeking, depresses the shit out of me. I’m not a fan of the job as it functions today, basically; it seems very far away from what it’s supposed to be, which would be me acting as an actual representative of the people who live in the district.

But even if I were interested in the job, I’m unelectable in OH-8. I’m not a Democrat, so I don’t have that strike against me (I’m registered independent), but I am generally what passes for liberal in the United States. OH-8 is religious and conservative; an agnostic pro-choice dude who believes the rich aren’t being taxed enough is gonna be a hard sell. I’m not going to bother to make it. I have other things to do, and I like those other things I have to do. So, sorry, folks: Not running. Try to contain your disappointment.

As for Boehner, I hope that he does something other than become just another lobbyist. He and I don’t have a lot in common politically, but he generally seems to be a decent human being who means well and tried to do what he saw as best for his district, his nation and Congress. He’s still young enough to do something more with that impulse. I’d like to see him to do that. 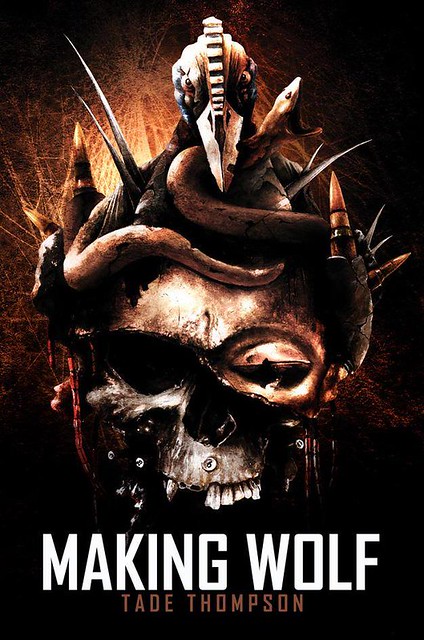 For today’s Big Idea, Tade Thompson takes the immigrant experience, plus the problems that crop up when you tell a little lie at the wrong time, and puts them together for his novel Making Wolf. What do we find out? It’s here, below.

Here’s the thing: if you’ve ever moved from one country to another, going back is always a fraught experience. Migration must be worth it, so when returning to the home country you must show off success either in terms of money or status, preferably both.

So what happens if you’re a lowly store detective, but you have to go home for a funeral? You lie. It’s harmless, right? Usually. But in my story the protagonist Weston pretends to be a homicide detective without attending to his audience. He’s kidnapped by a rebel faction and asked to solve a cold-case, a politically radioactive murder that nobody really wants solved unless the finger points at someone else.

What follows is a weird, violent and frightening journey through a country that has become unfamiliar and alien. The amateur sleuth is a time-honoured tradition in crime fiction, but it is usually voluntary. Weston has to solve a murder to keep himself alive. Then there’s Church, his guide in this journey, a personification of the chaos, who might just be responsible for executing Weston should he fail.

I had to create an alternative time line and an imaginary country because Making Wolf is based on aspects of my own childhood in Nigeria and I don’t want to offend individuals who may be identified. The way memory works tells us that what we think we remember is mostly fiction, so the Nigeria I think I’m remembering may no longer exist, or never have existed in the first place.

If I could not write about these matters, I’d have to make everything up, transforming people and places beyond recognition. My speculative fiction background kicked in and I threw worldbuilding at the problem. I created an alternative time line in which the Nigerian civil war had a different outcome, and I created a new country between Nigeria and Cameroun. I was good to go.

What I do remember accurately is the experience of danger, the pervasive paranoia and the constant negotiation of relationships with powerful people. Conspiracy theories were everywhere. The threat of sexual violence was omnipresent, and if you threw a stone, you’d find a victim.

The ingredients were there for a noir narrative: a disconnected detective, a baffling milieu, an ambiguous relationship with the police force, a femme fatale, a murder, and a conspiracy. Raymond Chandler and Mickey Spillane were staples of my childhood literary diet, and it was fitting that Making Wolf emerged as first-person and gritty. Weston is not Philip Marlowe or Mike Hammer, but they do share similar experiences and some DNA strands.

Speaking of DNA, the usual CSI techniques are not available in my narrative. It’s a brute-force investigation depending on leg work, brain power and dumb luck.

At its heart, crime fiction is about the social contract. We agree to live in peace with one another, and if someone comes along who won’t play nice, we sanction them. We use crime fiction to tell ourselves that no matter what happens, if someone breaks the contact, we will find the person and break them. This doesn’t happen all the time in real life, but we would like to believe it does, and so we tell ourselves stories about it.

Making Wolf is one of those stories.