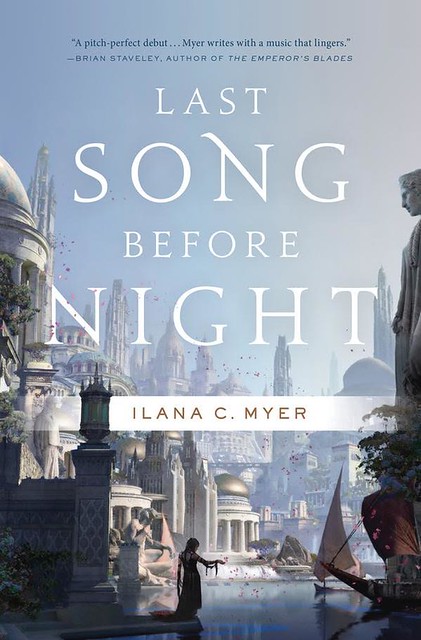 Poets: Can they change the world? And what kind of world would it be if they could? Ilana C. Myer poses this question in her Big Idea, for her novel Last Song Before Night.

It began in a college class—long enough ago. The topic was poets in Celtic myth. The text was “Guaire’s Greedy Guests,” the tale of a man who suffers from guests for whom the term “imposition” is an understatement. The host must accede his guests’ every demand, is too scared to do otherwise, for one reason: they are poets. Poetry, in those myths, had power. With words they might bring any disaster on him they choose.

The idea of a terrifying poet is incredible to anyone who has lived in our world for five minutes. Even our Poet Laureate’s greatest power is, likely, to acquire a prestige position at a university. Yet here in Celtic myth was a different concept of the poet altogether. Kings sought the blessing of poets, feared them. A life might be transformed, or destroyed, through song.

There in that class was planted the seed of Last Song Before Night. I asked myself: What would it be like to live in a society where poets were powerful? Where they posed a threat even to the king?

Immediately I thought, first of all, as personalities they would be less like poets of our day and more like rock stars. The combination of charisma, skill, and societal clout would make someone larger than life. But they’d have the pitfalls of rock stars, too—the ego traps and rivalries that characterize the arts as a whole, especially near the top. And with such characters as protagonists, the conflicts must center first and foremost around questions of art: What it means, what it makes of us, how it connects us to the world. How through art we can craft illusions to hide from the truth of ourselves, or else discover it—at times in ways acutely painful.

When Last Song opens, poets are enjoying fame and wealth although their enchantments are long gone. They reap the rewards of being rock stars without the responsibilities of true power. Ultimately the protagonists will be forced to recover their lost enchantments in order to avert cataclysm—and this can only be done at great cost.

While Celtic myth provided inspiration, I was equally intrigued by the troubadours of twelfth-century Provence, with their intricate codes of honor and problematic ideation of women. That I ended up writing the book while living in Jerusalem, a city of near-eternal summer and Middle Eastern culture, was an influence that crept in through the back door.

Beyond the influences of myth, place, and history, what shaped this story was an intense drive to create something even when there didn’t seem to be a point—everyone knows it’s hard as hell to get published. Dedicating years and making significant life choices around the completion of this book always seemed, in light of reality, a form of madness. Inevitably, the questions I was forced to ask myself over the years—why I was doing this, what art means to me—became an undercurrent in the writing.

I had hoped, starting out fresh out of college, that through the process I’d discover concrete  answers. I can say honestly that this didn’t happen, but what opened up to me instead was infinitely more valuable in the end. I am excited to share it with you.

← Weekend Clouds
I Had Things I Wanted To Write Here But Got Swamped by Actual Work, So While I Catch Up, Enjoy This Very Important Cover Version of a Very Important 90s Song →