In order from best to worst:

3. December: Come on, it’s the holidays.

4. September: Start of the school year (traditional). Football, if you care.

6. November: The middle child of the 4th quarter. Thanksgiving in the US.

8. January: New year, but first half feels like December’s hangover.

9. February: Screw you, Valentine’s Day, don’t tell me how to feel.

Your rankings belong in the comments. 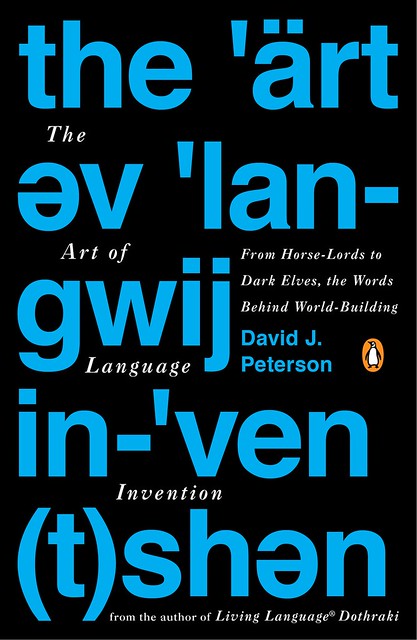 Here’s a word for you: “Conlanger.” Do you know what one is? And what one does? And how they relate to some of your favorite fantasy and science fiction movies in the last several years? David J. Peterson, author of The Art of Language Invention, will catch you up on all the details — and they’re very cool details, to be sure.

I am a conlanger.

If this were the year 2000, one in every ten thousand or so people would know what that meant. Now in 2015, I’d say one in every four or so people have an idea what that means. That’s huge. And for those of us that are conlangers (or language creators, for the other three quarters), the notion that language creation is now a publicly discussed, if not understood, phenomenon is still surreal.

After all, it wasn’t too long ago that conlanging as an activity was still quite obscure. The rise in notoriety of language creation wasn’t gradual, but exponential. Starting with James Cameron’s Avatar at the end of 2009, and followed closely by Game of Thrones in 2011, conlanging’s star has risen more dramatically in the past five years than it had in the previous 900.

The meteoric rise of conlanging coupled with a sea change in how we interact with the internet (younger folks especially) has left us with a strange reality. Scores of new would-be conlangers are coming to the craft specifically because of examples they’ve encountered in film and television in the past five years. Further, because of how they use the internet (Twitter, Tumblr, Facebook, Reddit—essentially media sharing and microblogging platforms), they’re finding each other, and finding discussions of well-known conlangs, but aren’t finding the older crowd—the original conlanging community.

The reason is simple enough. The older conlanging groups are housed on e-mail–based listservs or phpBB bulletin boards—platforms that were hugely popular in the 90s and early 00s, but which don’t seem to enjoy a lot of use anymore. Additionally, most conlangs by older conlangers are presented on personal websites—often with hand-coded HTML and CSS—which are all but invisible now that webrings and link lists are passé.

Now don’t think for a moment I’m bemoaning the current state of the internet—far from it! Sharing/resharing has changed the world, and changed it for the better. Reddit has really filled the hole that the death of newspapers had left in my morning routine.

The problem lies not with new conlangers, but with the old guard—those that aren’t transitioning to the new internet. Unfortunately, it’s the new conlangers who are suffering for it.

Going back to the year 2000, I was a brand new conlanger who didn’t know anything about the craft or anyone else who created languages. After a year of fumbling in the dark with my first language I found the original conlanging community, and that’s where I learned everything I know today. That’s basically what everyone did back then: Found the community, listened in, shared, received critiques, and improved.

The best part was, as a community, we all got a lot better at creating languages. Whether it was a language for a fantasy novel one was working on, or a “what if” project to test the limits of our linguistic capacity, the projects that came out of that period were stellar. And it makes me sad to think that while conlanging is currently at its zenith, much of this work is more obscure than ever.

With The Art of Language Invention, my purpose was twofold. The first was to give the uninitiated a window into the world of conlanging: to see what it’s all about, to see the work that goes into creating a language, and, maybe, to see if it’s for them. The second, though, was to build a bridge between the original conlanging community and the conlangers to come.

Obviously, the most visible part of this bridge-building is sharing the conlanging strategies, tips, and tricks I’ve learned over the years and included in the book. These, of course, are not my own invention: they come from the education I gained as a member of the early conlang community. Beyond that, though, I wanted to advertise the fact that other conlangers have done great work, and they have a lot to share—and a lot to teach.

The reason this is so important to me is that I hold no illusions about the position I occupy in the world of conlanging and how I got there. I was fortunate to be born when I was born, and fortunate that, after creating my first language, I found the early conlang community. After putting in ten years learning how to create languages, I was fortunate to hear about the competition to create the Dothraki language for Game of Thrones (not all conlangers did), so when I got my shot, I worked my choyo off to get the job—not just because I wanted it (I did), but to honor those that helped to inform my understanding of the craft.

Because outside the accidents of history, I am one of the old conlangers. You can still see my old website with hand-coded HTML and CSS here (and, yes, I like those colors, and I’m not changing them!). Some of my old languages were just okay; some were pretty good. No one would have heard of them, though, just as few have heard of Kash, created by Roger Mills, who died this past September. He put a lot of work and a lot of love into that language, and it’s quite impressive (I love Kash’s reciprocative reduplication pattern). Work like this is worthy of study and admiration and deserves to be remembered.

So, since I got the opportunity to write a book on language creation—to write about the art that has been my passion for over a decade and is now my livelihood—it was my big idea to let everyone know exactly what’s behind some of the conlangs you hear and see on the big and small screen, and to acknowledge and celebrate the conlangers who came before me and helped me to become who I am today.