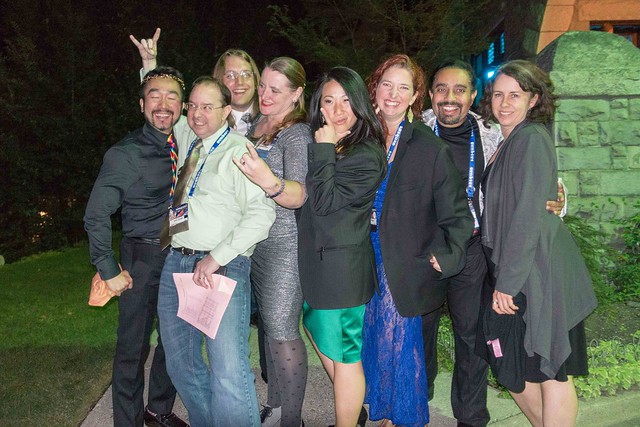 The New York Times ran an interesting article today, in which the writer of the piece talked about the difficulty of making friends if one is over the age of 30. The reasons for this vary and can include the fact that one has a family and children to worry about, time pressures, scheduling, and the fact that as one gets older one becomes pickier about the people one chooses to spend time with in any event.

I found the article interesting because while not discounting all of the above, my thirties and forties have been very good years for me in terms of the acquisition friends, both in terms of quantity and of quality of friends. I can say without reservation that a number of the people that I’ve met in the last decade have become some of the most important people in my life, friends that I can’t imagine living my life without now. I don’t disagree with the writer’s general thesis — I do think it is generally harder to make new friends the older one gets — but it does make me wonder what the mechanics of my situation have been that make the last decade different for me than for this particular author.

The answer, think, is relatively simple: I moved into a line of work with a deeply-established social structure. Which is to say that when I became a science fiction author, I plugged into a field where there were lots of conventions and social events, i.e., opportunities to socialize with people who have similar enthusiasms, and where both fans and pros in the genre generally buy into the idea of a community. All things being equal, people are friendly and supportive rather than not.

Additionally, the way that the science fiction community comes together for conventions and similar events works really well for the general impositions that adults have making and maintaining friendships. When fans and pros go to conventions, by and large they are taking a bit of time from their “real” lives to have two or three days of highly concentrated social experiences: Hanging out in hotel bars, staying up late with deep (and not so deep) conversations about work and life, and otherwise focusing on enjoying themselves with others — not worrying (as much) about life, and kids, and other parts of their existence that distract from making a connection with other adults.

There’s also the fact that people in science fiction and fantasy (and also I think in literature generally) are pretty good with the social media thing. While there’s certainly the possibility of downside in blogs/Twitter/Facebook what with complete and utter assholes trying to get your attention, which we don’t need to get into at the moment, the lovely upside to social media is that it makes it easy to stay in contact with friends even when you can’t physically be with them at any particular moment. Snarking with my pals (authors and otherwise) on Twitter or Facebook helps keep the friendship humming along, so you don’t have that start-and-stop feeling that the NYT writer mentions.

(I don’t think that any of this is unique to science fiction and fantasy, mind you. There are other communities that adults can join into and have at least some of the same dynamics in play. This is just the one I lucked into.)

Finally, I think there’s a personal aspect as well. I find it relatively easy to be friendly with people, and consequently, to make friends — and also (this is somewhat important, I think), I don’t fret if I don’t see a friend for months or even years at a stretch. Because, you know, I realize we’re all adults and have lives and kids and such, and that sometimes that’s just the deal. I mean, I can usually tell pretty quickly whether I want to be friends with someone. If I do, then the qualities that make them someone I’d want to be friends with are (generally) not likely to go away. So I don’t worry about seeing them again. When I do, I assume it’ll still be there. And in the meantime, as noted: Twitter and blogs and such.

(And also, occasionally: Email and/or phone and/or other private communication! That’s right! Not everything in the New Age has to be done in public!)

I do think friendship as an adult has to be approached with the understanding that it is different for adults than for people in their twenties or below. If you try to do friendship like you were sixteen years old, then it’s probably going to end up like anything you’d approach as if you were sixteen, i.e., kind of a hot mess. Being sixteen is fine when you’re sixteen. It’s problematic when you’re thirty-six or forty-six. So, be a grown-up about what friendship is and how it’s done in between everything else in your life, and I think you’ll be fine.

I’ve noted before here, a while back, that prior to coming into the world of science fiction, I told Krissy that I was pretty sure I had made all the friends I was ever going to make. It turns out I was entirely wrong, and it turns out that I am very happy about that. I wouldn’t trade the friendships I’ve made in the last decade for anything in the world. They were a surprise for me and I’ve been grateful for them. I continue to be grateful for every new friend I make. I hope to make at least a few more before I’m done.

(Picture above of a group of us at the Hugo afterparty, borrowed from Ramez Naam)

53 thoughts on “Adulthood and What Being a Friend Means Now”