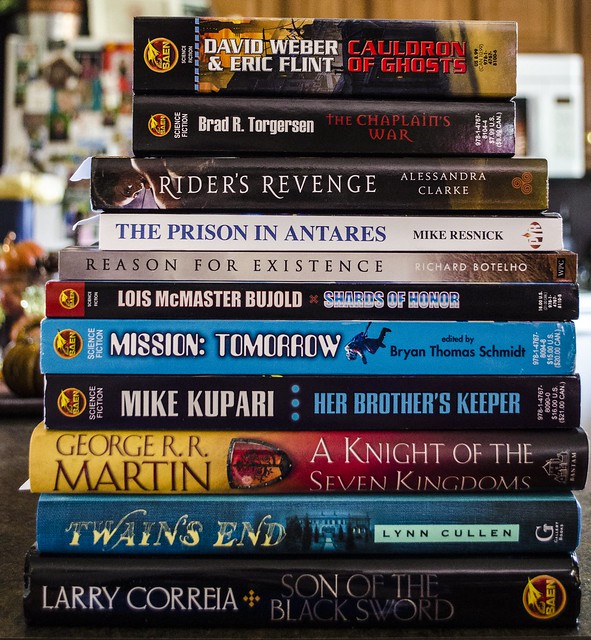 I usually post new book/ARCs entries later in the week, but I’m going to be busy later this week, at NYCC and at Nerdcon:Stories, and also I received enough books to do a post today, so: Hey, look! New books and ARCs! If you see anything that interests you, tell us about it in the comments. 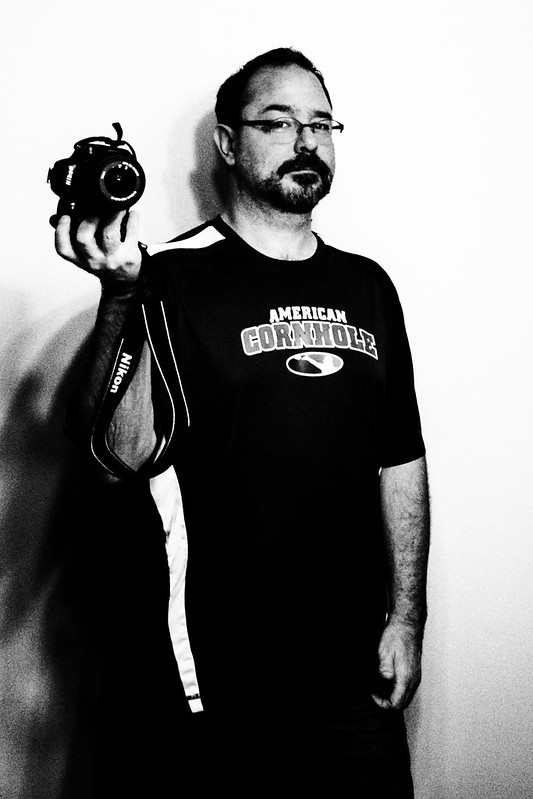 I believe cornhole is about to replace kickball as the hipster sport of choice, and for once I’m out in front of the trend. Way, way far out. Who will join me on this ragged, hipster edge?

Also, for those of you going “Cornhole? WTF?” here’s an explanation of the sport. And yes, there is actually a national league. That’s where I got the jersey.

Tor.com is unveiling Tor’s new logo today — it looks like the old logo, only, you know, more modern — and offering a timeline of highlights from Tor’s now 35-year-long history. I’m delighted to say I show up on the timeline twice, first in 2005, when it’s noted that I and Brandon Sanderson debuted in that year, and again in 2013, when Redshirts won the Hugo award. It’s nice to be considered part of that history.

I’ve remarked on it before, but I’ll do it again now: I like that Tor is my publisher. Part of it has to do with the fact that Tor is Tor, the largest publisher of science fiction in North America and possibly the world (I’d have to check to see what’s up with China these days to be sure about that), and so being published by a company that has the talent and skill and reach of Tor is a nice thing indeed. Tor is also one of the smartest publishers, too — it hasn’t been afraid of the digital world, and it trusts its readers, which is why their ebooks are DRM-free.

Part of it is that nearly all the time I’ve been with Tor, they’ve been willing to back what I did in fiction, even if it didn’t necessarily make great sense on paper. Write a book that starts with a chapter-long fart joke? Go for it! Rewrite a classic of the genre just to see what it’d be like. Cool, let’s see what happens! Take one of the oldest jokes in science fiction — hey, it’s not a great idea to be the dude in a red shirt! — make a whole novel out of it, and tack on three codas at the end, just for kicks? Why the hell not, we’ll run it up the flagpole and see who salutes! And so on.

The leeway I’ve gotten from Tor in what they publish from me is a microcosm of how I think Tor approaches science fiction and fantasy in general, a philosophy of well, let’s try it and see what happens. Tor is no stranger to “old school” science fiction, of course — one need only look as far as the Old Man’s War series for confirmation of that — but I like the fact that they don’t hold to the philosophy that science fiction is only that (or that fantasy should only be one way, for that matter). Science fiction and fantasy by their very definitions should contain multitudes: Multitudes of stories and ideas and perspectives and authors. I look at what Tor publishes and I see a lot of different work, from a lot of different points of view. This is good thing. There’s always room for more, and I like seeing my publisher going toward the direction of more. I hope it continues to be a guiding philosophy.

Mostly, however, I’m glad to be part of Tor because of the people I know there. My editor Patrick Nielsen Hayden, most obviously (and Teresa Nielsen Hayden, font of wisdom that she is), but so many other people as well. To name just a few: Irene Gallo, the company’s art director, who is one of the very best in publishing, period; Alexis Saarela and Patty Garcia in Tor’s PR department, who have to put up with me when I’m on tour; Liz Gorinsky, who even as Patrick’s assistant was always one of the smartest people in the room; and Tom Doherty himself — if anyone can be called a wizard of publishing, it would be he. There are more, many more, than this. I like the people I know at Tor. They make publishing there a generally pleasurable experience.

Is Tor perfect? No, it has its foibles and missteps, and it and some of its people have done dumb things in the past, because people are people and business is business. It hasn’t even always been perfect with me; I’ve had some sharp disagreements with the company in my past, and I’m sure I will have kvetches and complaints in the future. I like Tor and am happy to be published by them, and consider many of the people who work there to be my friends. But I also don’t forget that Tor is also a publishing company, owned by a larger publishing company, owned by an international holding company, with fallable humans comprising those companies all the way up to the top. Their priorities and mine are not always in sync and never will be. If as an author you don’t understand this fundamental disconnect, you’re going to be grievously surprised one day. This is not me saying know your place; it is me saying understand the context.  If you understand the latter, you might be surprised at how far you can get.

Tor and I are going to be in business together for a long time, so I’m glad I like the people and the company, and the general philosophy of the publishing house. I’m invested in Tor’s success, as they are now in mine. I’ll be happy to have that new logo on the spine of my books over the next decade.