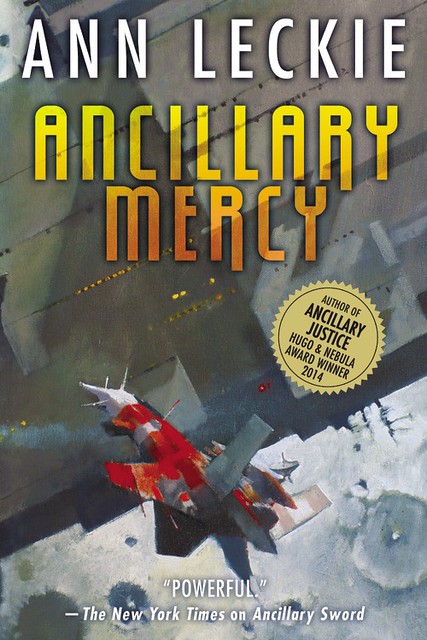 And now, for Ancillary Mercy, the third book of a trilogy that began with the ridiculously successful Ancillary Justice, Ann Leckie ditches the usual “Big Idea” format for something else entirely. And why not!

So let’s be real. Ancillary Mercy is the concluding book of a trilogy. Trilogies are often (though of course not always) very large single works. So in a lot of ways the “big idea” of Ancillary Mercy is a logical extension of the big idea of Ancillary Justice. And really, if you haven’t read Justice yet, Mercy probably isn’t the best place for you to start. Though, you know, you can if you want to.

So instead of going over the AJ stuff again–what is a person? Who is anybody anyway?–I instead give you the Ancillary FAQ. These are all questions I’ve actually gotten (or oveheard) at one time or another.

Q: How can you possibly wrap the story up in one more volume? There’s too much going on; I don’t see how you could manage it.

A: The easiest way for me to answer that is to actually do it. Which I have, and you can see the answer for yourself wherever fine books are sold. Or at a library near you. I love libraries. They’re awesome.

Q: Will there be more books after this one?

A: There will be more books, and certainly more books in this universe, but not books about Breq. Nothing against her, I’ve had a lovely time these past three books, but it will be nice to do something different.

Q: What is it with you and tea?

A: I love tea! Tea is the most frequently consumed beverage on this planet, next to water. I can’t imagine we’d go far from our solar system without finding a way to take it with us. Also it’s partly a very respectful bow to C.J. Cherryh’s Foreigner series.

Q: There was not enough Seivarden in Sword. Will you be remedying this in Mercy?

A: I have to admit the strength of some readers’ affection for Seivarden caught me by surprise. I mean, I love her, of course, I made her. I just didn’t expect her to be quite so much of a favorite.

In answer to your question, I present two Wordles for you to compare. If you’re not familiar with Wordles, it’s a thing where you take a bunch of text–in this case two novels–and plug them in and you get a graphic where the most frequently used words are larger and the less used ones are smaller.

First, the Wordle for Ancillary Sword. Note the relative size of “Seivarden.” A little difficult to find, huh?

And now, the Wordle for Ancillary Mercy.

Q: I notice the word “translator” in that Mercy wordle. And that only reminds me that Translator Dlique was onstage for far too short a time in Sword, and now I am sad.

A: I myself was sad when I realized how short a time Translator Dlique would be onstage. But there really was no way around it.

I was talking with a friend of mine recently, and saying that I’d heard from some readers who were very unhappy with the all-too-brief appearance of Dlique, and she frowned at me and said, “But what about…oh, wait! They haven’t read Mercy yet!” And then she started laughing.

Q: I really think the second book ought to have been called Ancillary Mercy. There wasn’t a whole lot of “sword” in it. Why is the second one Sword and this one Mercy?

A: Originally the titles of the three books were going to be Justice of Toren, Sword of Atagaris, and Mercy of Kalr. My agent knew nothing of this–well, except the title of the first book–and thought Justice of Toren wasn’t a particularly fabulous title. He suggested Ancillary Justice and I agreed, pleased that my Justice/Sword/Mercy scheme could remain in place.
As often happens when I write–I gather this happens to lots of other writers as well–Sword of Atagaris ended up not being quite as prominent a character in the story as I’d originally planned. But I still didn’t want to switch the titles. For one thing, I think Justice/Sword/Mercy makes a better overall arc. For another, well, read the book.

Q: I’m really hankering for some Imperial Radch fan art. Is there any?

A: There sure is! And it’s fabulous.

A: Fanfic is awesome. My fanfic policy is “I won’t read it, please don’t try to sell it, but otherwise you have fun.” And frankly, as far as I’m concerned, having people write fanfic of your book is right up there with winning awards.

Q: What sort of tea would the Radchaai drink? Is it like some kind of tea we have here on present-day Earth?

Q: No, but seriously, Ann, at the end of Sword you left us with a damaged space station, a resentful and mutinous warship that has every reason to hate Breq, a mysterious ship on the other side of the Ghost Gate whose nature and motives we know almost nothing about, a civil war in progress, and possibly angry and very dangerous aliens going to turn up at some point–

A: That’s about the size of it, yes. And the only way to find out what happens next is to read it.