I can not believe that fog got school cancelled today. Amazing.

@scalzi I SHALL DEFEND THE HOUSE SINCE YOU ARE GONE.

@AScalzi98 BE FIERCE AND MIGHTY, MY BRAVE DAUGHTER

I NEED FAN ART OF THIS STAT https://t.co/rxuWpJjee4

@scalzi @AScalzi98 BY YOUR COMMAND. Hey, it was a weird word picture to begin with. pic.twitter.com/hfX7X8gE18

Never a dull moment with the Scalzis, I’d say. 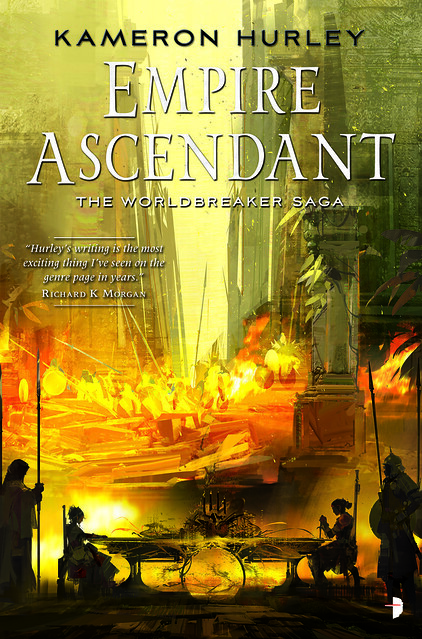 Hey! Kameron Hurley’s fantastic Worldbreaker series has a new installment, Empire Ascendant! And she’s here to tell you about it! I’ve used up all the exclamation marks I’m allowed for the month now! Here’s Kameron!

What would you sacrifice, to save everything you’ve ever known or loved?

What happens when what you need to sacrifice is… everything you’ve ever known or loved?

It’s this question that plagues the heroes and villains of Empire Ascendant.

In the first book in this series, The Mirror Empire, rifts opened between parallel universes, and the people of the world called Raisa found their countries overrun by their own dopplegangers, each of them fleeing epic environmental and magical catastrophes on their own worlds. The catch? Your double can’t flee to an alternate world unless their counterpart on the other side – you – is already dead.

While The Mirror Empire focused on bringing together our merry band of assassins and pacifists, rebels and blood mages, to face the coming threat, the big idea behind Empire Ascendant was to explore what would happen when a far superior hierarchical force finally confronted a small, pacifist country with no real central leadership.

My academic background is in the history of war and resistance, and I drew deeply on this when developing the series.

We know that a larger, more technologically advanced force has huge advantages over a smaller, less organized one. But history also has plenty of examples of what can happen when a larger force tries to overwhelm a small, passionate group of people on their home turf (Vietnam, Iraq, every war in Afghanistan, the Revolutionary War).  In Empire Ascendant I wanted to see how these overwhelmed societies would react, and chart what would end up being one world’s attempt to avert its own genocide.

What this means for the people in Empire Ascendant is that the tactics employed in this conflict must be more ruthless. The “rules” of war – whatever they may have been – are suspended or simply discarded. Wars of attrition rub off the façade of “just conflict” that we like to drape over the narrative of particular types of wars (especially those in which our own country is the aggressor), and reveal it for what it is: nasty, brutish, inhumane.

When you have everything to lose, you often find that you are tougher than you ever imagined. War is celebrated for this: go to war to learn what you’re really made of!

But are you the hero, or the villain?

In Empire Ascendant, every character can be both.

This is the story of your survival. And your destruction.