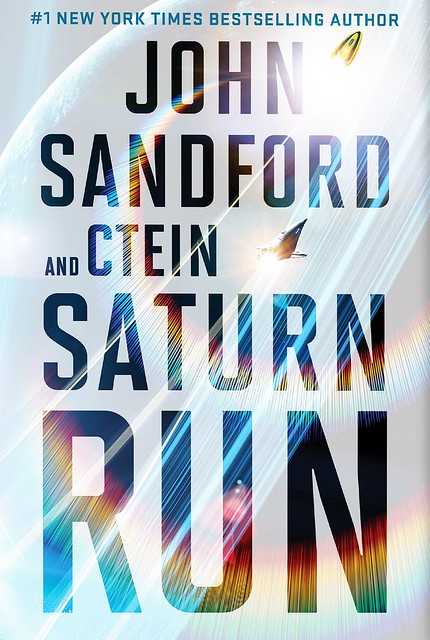 What do you do when you have a great idea for a story, but it’s an idea that a little outside your usual remit as a writer? In the case of John Sandford and Ctein and their new novel Saturn Run, you take a tip from the Beatles: You get by with a little help from your friends.

Once upon a time…

… because all good stories begin that way …

John Sandford, a best-selling cop-thriller novelist, had an Idea for a mainstream science fiction novel (he’s an SF fan, but had never written any). Actually, he had two ideas, and one of them was nuts.

The first — What would happen if a starship entered the solar system and proceeded to entirely ignore us. Not, in and of itself a new idea; see Rendezvous with Rama. An unknown starship could be an incalculable threat or boon. We don’t know which, but we know how the story plays out: Humanity will unite in what is undeniably a common cause, as it has so many times in the past, and set out to investigate…

… Wait a minute. Rewind. Is this us we’re talking about? Because, y’know, history might suggest we’re not so good at this unification thing.

Right. There’d be a mad scramble, with every side trying to figure out how to gain advantage, because it would be really, really important that the Good Guys benefit from this and not the Bad Guys, a.k.a. Us vs. Them. It’d be a new space race––get to the aliens first (are there even aliens???), assess the threat, grab what goods are to be got, and make sure the Bad Guys don’t get any.

There are catches. The clock’s ticking down, so no leisurely decade-long mission plan. Design and construction have to be hurried. The ship needs to get to Saturn in less than half a year. Oh yeah, and this has to be done in secret.

The whole mission comes off on budget, on schedule, on point, and all goes well. Because, y’know, that’s just the kind of story that makes for a good thriller.

That Big Idea led to a Big Problem. How the hell do you get a ship to Saturn in under six months, not to mention building it in under two years? No “wantum mechanics” (Greg Benford’s wonderful term for totally-made-up science shit); it’s not much of a hard bolts-and-rivets thriller if people know you’re faking it. It wasn’t an unsolvable problem. John could research it. In his former life he was a Pulitzer Prize winning reporter and has written forty or so thrillers, so he knows research. It’d just take several years of his life to get himself fully up to speed, that’s all.

The hitch was, John’s steady gig is turning out two novels (plus change) each year like clockwork. His readers expect it. He can’t take off a couple of years to explore himself as an author. This led to John’s second Big Idea, the crazy one.

Why not write it jointly with his friend, me? We’re both professional authors, who’ve made good multi-decadal careers out of generating words for money. We’re both disciplined and know how to meet deadlines. I already knows a whole lot about science fiction, and those Physics/English degrees oughta be good for something. John figures I’ll be able to solve the Big Problem(s).

Except for one little detail, which made it a crazy idea. I’m strictly nonfiction. Never written fiction, never wanted to. We’ve discussed this. Still, nothing ventured. John rings up Ctein:

John: I have a proposition. Hear me out before you say no. That science fiction novel? It’s not happening. You should write it.

Ctein: I don’t do fiction. It’s way too much like work.

John: Yeah, yeah. Look, just think about it. I’ll send you what I’ve got so far. It’s not much. There’s no pressure; take as long as you like. It’s not going anywhere for me. If you want to try your hand at it, you’ll be pretty much writing the whole first draft on your own.

John: I’ll help when you need it. I’ll do the first rewrite, we’ll both polish it up, my agent will sell it, and we’ll split the money.

Ctein: Money’s OK. Working for it, not so much. ‘Sides, I’ve heard it’s the root of all evil. Well, some of it, anyway.

John: Whatever. First thing is, we need a spaceship and we need one that can get built fast. I figure our future US will have a pretty decent space station…

Ctein: That won’t work. I don’t think there’s any good way to turn a space station into a spaceship.

John: You’ll figure something out.

End of phone call. I read over the files and went to bed. The next morning I thought, “Waitaminit, I know how to turn a space station into a spaceship.”

I was probably doomed at that point, but it took me months to come to terms with that.

Six months later, I had done everything a skilled and experienced professional non-fiction author could possibly do. The office was a hell of a lot cleaner. Heaping stacks of papers had been properly sorted and filed. Even the computer desktop was reorganized. It was either tell John to forget it, go after the bathroom tile with a toothbrush, because, damn, that grout was dirty…or start writing.

I opted for door number three.

Four days later I sent John a rewrite of his original first chapter plus a brand-new chapter of my own. One nail-biting day later, there was a short e-mail from John: “This is okay. We can work with this.”

From that halting beginning, we went on to write the saga of the great race between the United States Spaceship “Richard M. Nixon” and the Chinese “Celestial Odyssey.”

The funny thing is, John’s nutso Big Idea actually worked. It really is both of us in the book. We each wrote about two-thirds of what’s in the final version (large chunks got rewritten so many times by both of us that it would take a forensic librarian to figure out who wrote what).

And that, kids, is how some books get born.