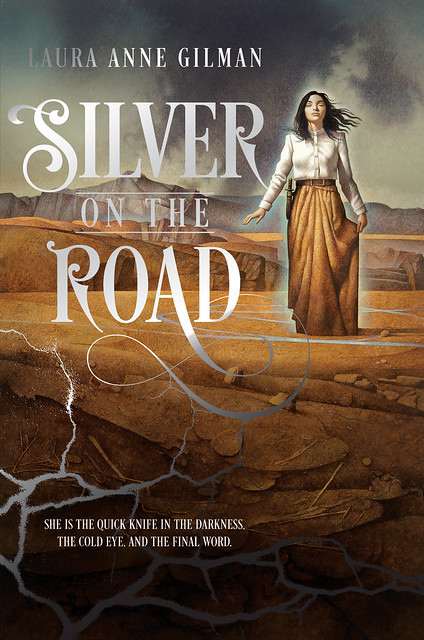 You can’t always always get what you want — particularly if you’re not precisely sure what that is. In the writing of Silver on the Road, author Laura Anne Gilman had to ask herself what she wanted, and how she was going to go about getting it.

My big idea?  Apparently was asking how badly you can screw yourself over by not being clear about what you want.

Wait, I’m getting ahead of myself.

The Devil’s West was born in 2010, when I wrote “Crossroads,” telling the story of a marshal encountering two magicians in mid-battle.

I didn’t really have any sense of the world, then – just this sense of a vast, empty landscape where demon and magicians wandered, and the weapon of choice wasn’t a rifle or a knife, but sharpened wits.  But the feel of it was so powerful, I couldn’t leave it be. So I wrote a second story, “The Devil’s Jack,” and discovered that this was a divergent American West, where the devil held sway, and everyone within the Territory – some vague space west of the Mississippi – danced to his tune.

Okay, that was interesting. Weird west?  At the time, it wasn’t a popular subgenre, but what the hell.

So I started a third story, focusing the events in a small town called Flood.  I learned that the devil is a saloon owner, playing cards for souls.  The majority of settlers come not from the east, but southwest, by way of Spanish-held Mexico. And the native tribes, under the Devil’s Agreement, have a slightly better hand – and no hesitation about playing it.

And about 20,000 words in* I realized that my main characters –  a 16 year old saloon girl, and a lawyer-turned-wanderer – – were at the middle of something much larger than simply a weird west adventure.  I was, in effect, rewriting American expansionist history.

Except I didn’t want to write that story.  Nothing against big, sweeping, detail-oriented alternate histories… but I had wanted to tell a relatively intimate story of two people at very different points in their lives (starting out, and approaching a mid-life crisis), and how they come to terms with the power they’ve each been given.

And now, here was this massive** canvas they were supposed to fill.

I may have panicked.

No, okay, I totally panicked.

Sauce for the characters, apparently, is also sauce for the creator: Be clear about what you want – because sometimes you get more than you’d planned.  I’d found myself in the middle of this incredible, colorful, deep-rooted world, and it wasn’t going away.

I think it took me about a month before I was able to approach the story again, this time far more cautiously.  How was I going to make peace between the story I wanted to tell, and the story lurking underneath?

Except… that’s all history is, isn’t it?  What we read a hundred years later are dry facts and dates, but the reality was real people trying desperately to dance on quicksand.  I could talk all I wanted about who the devil actually is, about the magic of the Territory, about the rules of the Devil’s Agreement and how it changes the interactions between immigrants and natives…. But at the gut, my big idea wasn’t about politics, but people, caught up in what will become history, but living the day-to-day, because that’s all we know how to do.

So I took a deep breath, and started telling Isobel and Gabriel’s story.  About the choices you make when you don’t have enough information, and the second chances you get to remake those choices.

And some magic, some monsters, a dust-mad magician, and the drive for power, both personal and political, that may get them all killed….

* At this point it also became clear to me that I was writing a novel, not a short story.  Whoops.

**Literally massive – the Territory is 530,000,000 acres (basically, the entirety of the Louisiana Purchase).