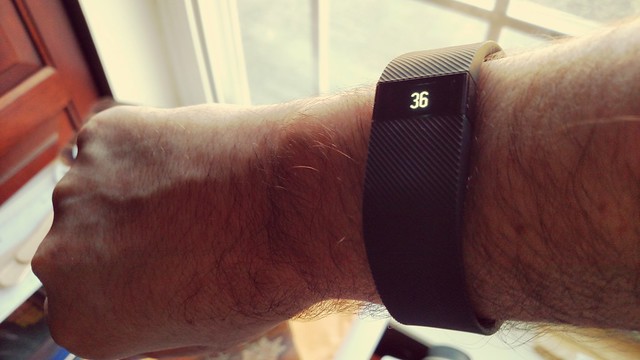 I needed a new bathroom scale (contrary to what I wrote on Twitter and Facebook, I did not kill the last bathroom scale with a hammer for the crime of informing me I was overweight; in fact one of its battery contacts had corroded, rendering the electronic scale useless), so I went looking for one yesterday. This being the future, the one I found that I liked was one that connected to the Internet and could talk to my phone in order to keep track of my weight-loss progress (or, uh, otherwise); it was the Fitbit-branded Aria. Since I was getting that scale, I figured I might as well also get a Fitbit band too, in order to help me keep track of the amount I actually, you know, move. And so here it is, my Fitbit band.

And on one hand, yes, I’ve become just another one of those jerks wearing a fitness band, which is sort of the electronic version of a kale smoothie. On the other hand, I currently weigh 186 pounds, which is 26 pounds over my general ideal weight, and from experience I know I do better with fitness-related things if I gameify them in some manner, which is probably some residue from a misspent youth playing video games. So, here we are, with me owning a Fitbit band and scale. We’ll see how it works.

This is also me saying, hello, I’m actively exercising and watching my weight again. I’ll start the actual “being more careful what I stuff into my face” part more assiduously in about a week, when I get back from my last trip of the year (I mean, I’m counting calories at the moment, but I tend to worry about them less when I travel). This week will be given over to figuring out how this Fitbit thing can actually help me with my goals.

To be clear, I don’t believe the mere possession of gadgets designed to help you track fitness stuff is a magical thing that either increases one’s virtue or replaces actual fitness-oriented work. Owning a Fitbit (or any such thing) is not the same as being fit. The thing will be useful only to the extent it can help me with that aim. We’ll see if it does. I hope so, otherwise I’ve just spent money stupidly. Which has been known to happen. Hopefully not this time.