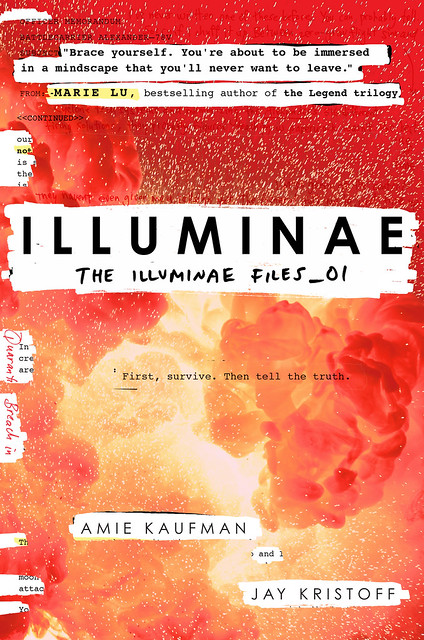 In their novel Illuminae, authors Amie Kaufman and Jay Kristoff decided to break stuff. What stuff? And why? They’re here to explain.

The Big Idea behind Illuminae?

Break the idea of what a book could be.

Epistolary novels aren’t a new concept. The conceit of telling a story through documents—be they journals or letters or diary entries—has been around since pistols at dawn and pantaloons were all the rage. But there hadn’t been much science fiction that played with the epistolary structure, or expanded it beyond the traditional journal/diary/email format.

And that’s where we started with Illuminae, too: A science fiction mystery, set in a refugee fleet fleeing a collapsed world, in which two unlikely heroes stranded on two different ships would communicate via text and email. Even though we were told “editors don’t buy SciFi”, we thought it was a cool enough idea to tinker with, and our Hacker Grrl and Pilot Boy were enormous fun to write. But around 30 pages and quite a few drinks into our first draft, we came up with the thought that’d break Illuminae out of the mold, and maybe break the idea of what a book could be.

What if one of the narrators was a damaged artificial intelligence, whose worsening madness would alter the documents in the novel? What if the way this AI perceived events would change the visual nature of the files, and the fundamental design of the entire book? Imagine a dogfight in space, where the chaos of battle was communicated visually as well as verbally. The effects of a computer virus unfolding typographically in front of your eyes. A book which ceased to be a simple medium for the story, where the object in the reader’s hands became part of unravelling the mystery of what went on aboard this fleet?

“That’s so pants-on-head crazy it might work,” we said. So we pulled together a 130pg sample, with Jay utilizing the design skillz he’d learned during a misspent youth in advertising agencies, selling petrol guzzling monstrosities to undersexed men and toilet paper to anyone with a bottom. And fortunately we found an editor crazy enough to not only buy our pants-on-head crazy idea, but help us push the boundaries even further.

It was vital to us that the story came first—that any design elements would be used to augment to novel, rather than be used as a crutch for shoddy storytelling. So the creation of Illuminae really came in two phases.

The first, the actual, you know writing part. Co-authoring is a strange and awesome experience—two styles and two mindsets colliding on the page. But two heads always seems to trump one, at least in terms of devising fiendish ways in which to torture protagonists. And so we put our two heroes and their AI nemesis/saviour through every kind of disaster, turn and twist we could devise. Pursuing enemy ships. Virulent plagues. Command conspiracies. Murder and mayhem and mutagens, oh my. But in between all this chaos, we also found the chance to ask a few of the Big Questions. What is it to be human? What would you sacrifice to save the ones you love? What is the meaning of life, the nature of mortality, the reason for all this? Our little SciFi mystery/romance/thriller took us places we never expected, and in the end, stopped being all that little (the final copy clocks in at 600 pages).

The second phase was design, in which no idea was considered too left field or too crazy. We were writing an insane artificial intelligence, after all. Gravity goes out aboard the fleet? We’ll just have the typography float. Want to visually explore the nature of a nuclear explosion on an atomic level? 5 hours in photoshop and half a bottle of Jack Daniels and watch the magic happen. And again, this wasn’t a new idea; Alfred J Bester’s classic The Stars My Destination incorporated experimental typography alllll the way back in 1956. But no one had done it to the scale we were pushing. Nobody had pushed it this far. We’re not kidding around when we tell you Illuminae is like no book you’ve ever read before in your life.

And in the end, did we break the idea of what a book could be?

You can always click on the links below and see. Either way, it was a lot of fun to try.

14 thoughts on “The Big Idea: Amie Kaufman and Jay Kristoff”