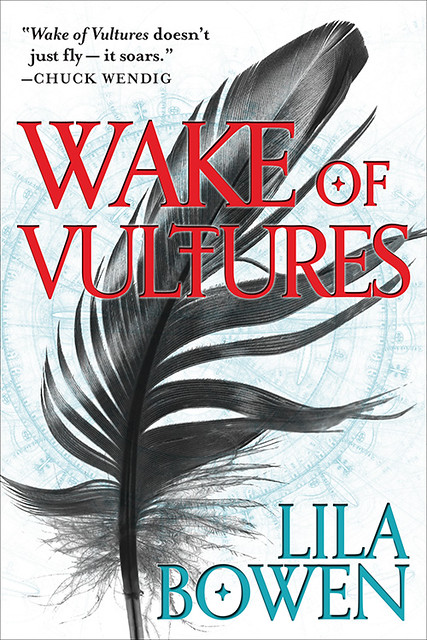 The author of Wake of Vultures, Lila Bowen, does whatever the hell she wants (so does Delilah S. Dawson, who is Lila Bowen when she’s not being Delilah Dawson). And what the hell does she want to do now? Tell you her big idea for her book.

Did you ever see that episode of South Park in which Eric Cartman shouted, “WHATEVA. I’M AN OUT OF CONTROL TEEN. I DO WHAT I WANT!” while wearing a tube top on the Maury Povich show? That’s basically the Big Idea behind Wake of Vultures. Not just for the characters, though. For me, too. I spent most of my life pretending to be normal, playing it safe, and afraid to offend anyone, but this book demanded noncompliance.

See, I’ve always been the do-bee. The good girl. The Valedictorian. The polite, responsible kid who’s never smoked a cigarette. I’ve always wanted to do the right thing, to please the people in charge. That goes for writing, too. But Wake of Vultures taught me that you can still write a great book while taking enormous risks, having tons of fun, and shaking your butt in the face of the status quo.

The thing about publishing is that right up until your first book sells, you have enormous freedom. But once you’re under contract and making a career out of your writing, you’re expected to adhere to certain rules. Your books are edited and marketed and sometimes neutered to appeal to readers according to the current publishing climate, and your agent and editor are invested in your continued compliance. Suddenly, there are all these guidelines you have to follow—what genres are selling well, what’s good for your brand, what the reading populace will find pleasant.

So when I told my agent that I wanted to write a Weird West adventure with a half black, half native, cross-dressing, bisexual heroine, she had a lot of reservations.

Westerns aren’t selling. Paranormal isn’t selling. What genre is this? Is it YA or adult? Your main character has a lot going on and can be pretty rude. This reads like an episodic monster hunt. And did she really cut off that werewolf’s dong?

My answer? YEAH SHE DID. WHATEVA. I DO WHAT I WANT.

Wake of Vultures is the first book that I wrote knowing it probably wouldn’t sell. It’s the book that made me decide that if I was going to flip one table, I might as well flip ALL THE TABLES. It’s the only book for which I got the tattoo BEFORE the book sold.

That tattoo inspired the book cover, by the way.

It was exceptionally freeing and exciting, writing something that was actively discouraged. It felt less like an acquiescence and more like a dare. At any juncture where I stopped to consider, “Is this too much? Is this too weird? Will people get it? Will it sell?”, I went with my gut, muttering WHATEVA; I DO WHAT I WANT. And my freedom allowed my main character, Nettie Lonesome, to take risks, too. She doesn’t follow the rules, and she doesn’t care if people like her or not. She’s here to kill what needs to die, not get a gold star for manners.

I was recently at an industry event, and a bookseller asked me what Wake was about. I gave my biggest smile and my elevator pitch: It’s Lonesome Dove meets Buffy the Vampire Slayer with a biracial, genderqueer heroine. The bookseller made a face—a face suggesting she wanted to vomit—and walked away. And I shrugged and muttered that same refrain in my head: YOU DON’T LIKE IT? WHATEVA; I DO WHAT I WANT.

I believe in this story enough to offend people and risk failure, and that’s enormously empowering. If you recognize that the world is full of heroes who don’t fit into neat, normal little boxes, you’ll dig it. If you love Westerns but wish women in that era could be more than slaves and whores, you’ll dig it. If you’ve ever had someone look at you and tell you that you don’t deserve the destiny you crave because of what you look like or how you dress or who you love, and you’ve wanted to flip a table on them and ride off into the sunset, you’ll dig it. Wake of Vultures is all about bucking the binary.

That vomit-miming bookseller didn’t pick up a copy, but plenty of other people have. It has stars from Publishers Weekly, Kirkus, and Library Journal, not to mention 4.5 stars and a Top Pick rating from RT Book Reviews. My editor and publishing team believe in it. And it’s currently being passed around the band Gangstagrass, the creative geniuses behind the Justified theme song and the playlist I listened to writing and revising.

I always tell my writing students at LitReactor that they need to learn the rules before they break them. I’m glad I finally found a story worthy of my rebellion.

My suggestion: Find something you love enough to risk breaking the rules. Do it, hard. Then shake your butt and shout WHATEVA; I DO WHAT I WANT. I tell you now: It feels damn good.

It is thus, complete with shoddy copy editing (which I learned about via this tweet by Natalie Luhrs, and subsequently confirmed via two WFC members emailing me copies of the program they had been sent):

As a compare and contrast, here’s the New York City Comic Con policy on harassment, which for the last two years has been visibly and prominently featured on six foot-tall banners at the entrances of the Javits Center, among other places. Note well that NYCC exists in the same state as this year’s World Fantasy Convention, and is subject to the same state laws: 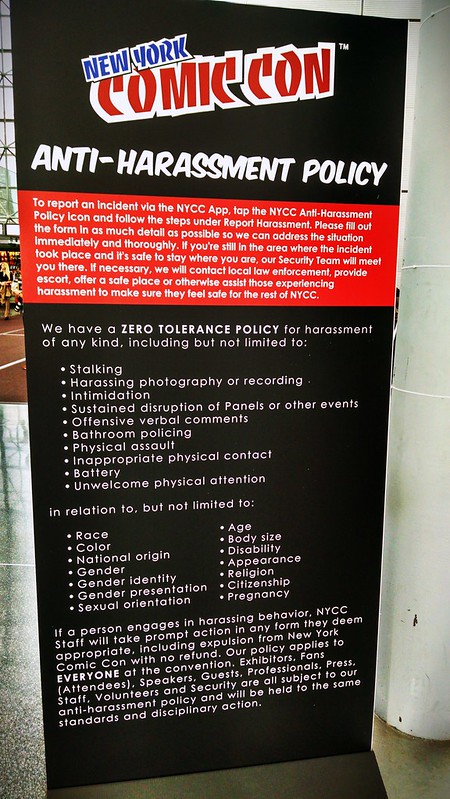 I am not a lawyer, but I expect that ReedPOP, the company that runs NYCC (among many other conventions around the US) has maybe a few lawyers on its staff. If NYCC is utterly and absolutely unafraid to promulgate a harassment policy even though there is a legal statute defining what harassment means in the state of New York, I expect it might have been possible for World Fantasy to have done likewise, if they chose to do so.

Now, over on the 2015 World Fantasy Convention Facebook page, there’s an argument that WFC calling something harassment that is not exactly in line with the legal statute exposes the convention to the risk of libel. One, see the NYCC policy above — either all these things are covered under the NY harassment statute, or NYCC/ReedPOP’s phalanx of lawyers determined that it’s actually okay for a private entity to state that for the purposes of their own private event, the definitions of harassment for that event are thus, and that those found violating those definitions would be tossed from the event, even if the legal standard of harassment was not met.

Two, if you’re absolutely paranoid that calling harassment harassment is libel if it does not meet a certain statutory bar? Then fucking call it something else. And indeed in its statement the WFC already does: “incorrect/uncivil behavior.” Dear World Fantasy Convention: if you cannot or will not create a harassment policy, why won’t you create an “incorrect/uncivil behavior policy?” That almost certainly will not leave you open to a libel lawsuit! And as a template, please see the NYCC policy above.

This also, incidentally, solves the appalling and utterly pathetic rationale the 2015 World Fantasy Convention gives for punting on having an actual and useful harassment policy, i.e., that the staff isn’t trained on recognizing the legal definition of harassment in the state of New York. Leaving aside the cogent point that the staff had most of a year to get up to speed on the matter, if they so chose, especially considering that they were apparently already consulting with the county district attorney and the local police on the harassment policy, if instead there’s an “incorrect/uncivil behavior” policy, the convention can define that behavior however it likes. It’s a private event which can define what it deems incorrect and/or uncivil behavior without referent to the legal statute on harassment. And it can very easily train its staff to recognize and act upon those examples of bad behavior, and it can likewise very easily communicate to convention goers what that inappropriate and uncivil behavior is.

Let’s call the World Fantasy Convention’s decision to hide behind the legal statute of harassment for what it is: Cowardly bullshit. The convention is abdicating its responsibility to provide a safe environment for convention-goers by asserting that it can’t do anything to deal with harassment unless and until it reaches a specific legal definition of harassment — which the convention doesn’t even bother to fucking cite in its material.

When your convention harassment policy boils down to “don’t bother us until you have to call the cops,” you have completely failed. The World Fantasy Convention should be embarrassed and ashamed to have let down its members this way. I’m not a member this year, but if I were, I would cancel my membership. I’d have no interest in attending a convention that decides the best course of action when it comes to the safety of its members is to punt.

(Update: Natalie Luhrs, whose tweet was the means by which I found about this, has thoughts on the matter here. She’s not happy either.)

(Update, 10/28: Via Jon Meltzer in the comments, WFC is attempting to improve its policy. Let’s see what it says when it’s finally published.)