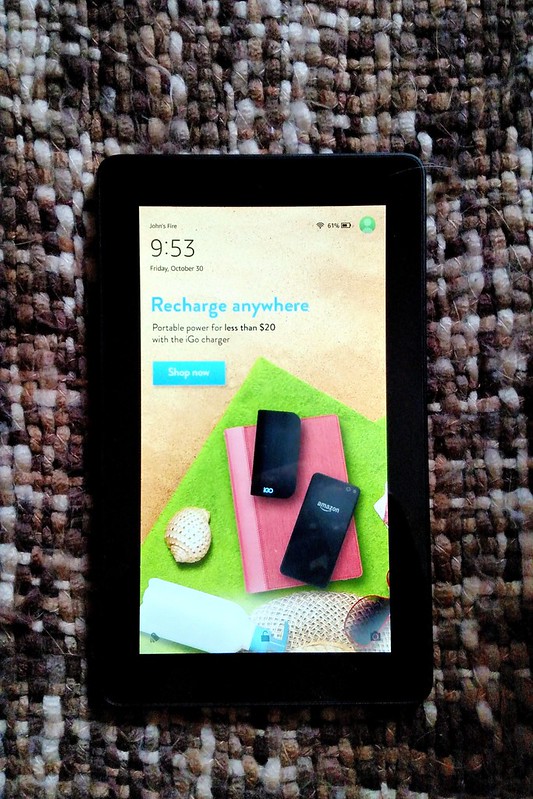 In its continuing bid to attempt to take over the world so no one ever will buy anything from anyone but them, Amazon a couple of weeks ago released a $50, 7-inch Fire tablet, designed, one presumes, to entice the curious, the cheap and those on limited incomes. Well, it worked on me; I was curious what a $50 tablet from Amazon would be like, so I got one. It arrived while I was away, so it wasn’t until yesterday that I pulled it out from its packaging and played with it.

My initial impressions: For $50, I don’t think you can really complain. This is by no stretch of the imagination a top-of-the-line tablet — it’s plastic-y, the power buttons are a little wobbly, the screen is a you-notice-the-pixels 1024×600 (171 ppi), and there’s only 8GB of memory on the thing — but, again, it’s fifty bucks. It’s got roughly the same basic specs as the 7-inch Samsung tablet I bought in 2012, and I thought that was pretty cheap at $250. One fifth the price in three years for these specs? Seems pretty fair.

If you accept you’re not getting the top of the line, you can also accept that what it is, is fairly decent. The screen is not great resolution but it’s an IPS screen so the colors pop. The 8GB memory on board is nothing great but it has a microSD expansion slot so you can expand the memory on board up to an additional 128GB (which will cost you the same as the tablet). In my playing with it, it’s perfectly responsive and had no problems with Web sites, email, and casual games. It’s for casual consumption of stuff.

And specifically, stuff from Amazon. The OS is Amazon’s fork of Android, so if you know Android, you won’t get lost here. That said, everything about the Fire is channeling you through Amazon. The app store is Amazon’s app store; when you turn on the tablet it advertises things on Amazon to you (you can apparently pay extra to have that turned off); the screens on the tablet are organized to help you more efficiently consume Amazon product.

I don’t think this should be huge shock. To be blunt, if you buy a branded tablet from a ruthlessly competitive retailer like Amazon, you shouldn’t be entirely surprised that you get a locked-down Amazon-only experience. But it’s also fair to point out that’s what you get, and to ask yourself if that’s actually what you want.

I went in knowing this tablet would be all-Amazon, all the time, so it wasn’t a problem (I suppose I could root the thing, but, really, why). Indeed, one reason I got the thing is that I have an Amazon Prime account and having a Fire tablet, as I understand it, allows me to access some features I might not otherwise be able to. So as a Prime user, this is the cheapest way to do that.

Would I recommend a $50 Fire tablet? Not for anyone who isn’t idly curious and/or has more than $50 to spend and/or isn’t already tied into the Amazon ecosystem. There are better options, including ones that don’t lock you into Amazon’s OS, app store and retail experience. But for $50, and for folks whole hog into Amazon? Hey, you know, it’s pretty damn not bad. So far I’m pleased with what I got in exchange for my money, which, ultimately, is the key metric.

← On the Occasion of Reaching 90,000 Twitter Followers
In Which We Debate One of the Great Issues of Our Time →