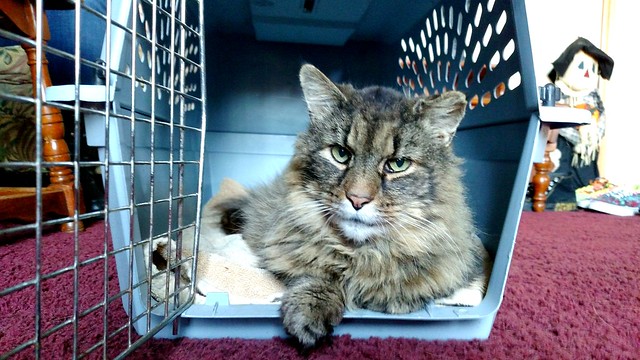 Here’s Lopsided Cat in a cat carrier, looking very mellow. He looks mellow because he’s stoned. He’s stoned because he just overnighted at the vet’s, where we booked him a room after we found him in the garage covered in detritus and drool, limping and looking like he’d been in a hell of a fight. We were worried he might have had a broken leg; the vet was worried he might have a dislocated hip.

As it turns out, he was perfectly fine — at worst, a little muscle soreness. He was definitely in a fight of some sort, but there was no fight damage or puncture wounds; the drool was the worst of it. He was apparently aggressively gummed. Which I expect means he beat the crap out of some neighborhood dog who thought it might be funny to go after a cat. We’ll have to ask around.

Be that as it may, it was an anxious moment or two there. Happy to say Lopsided Cat is still a badass. And, at the moment, a badass who is just so damn high. 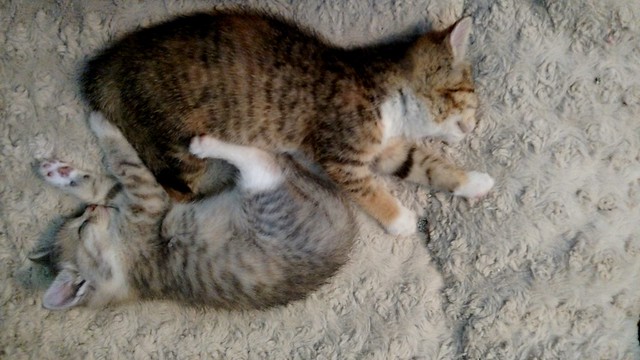 They’re adorably all kittened out here, probably because earlier they had round two of their cat fight:

That leaves things all tied up. Will there be a tie-breaker? Stay tuned! 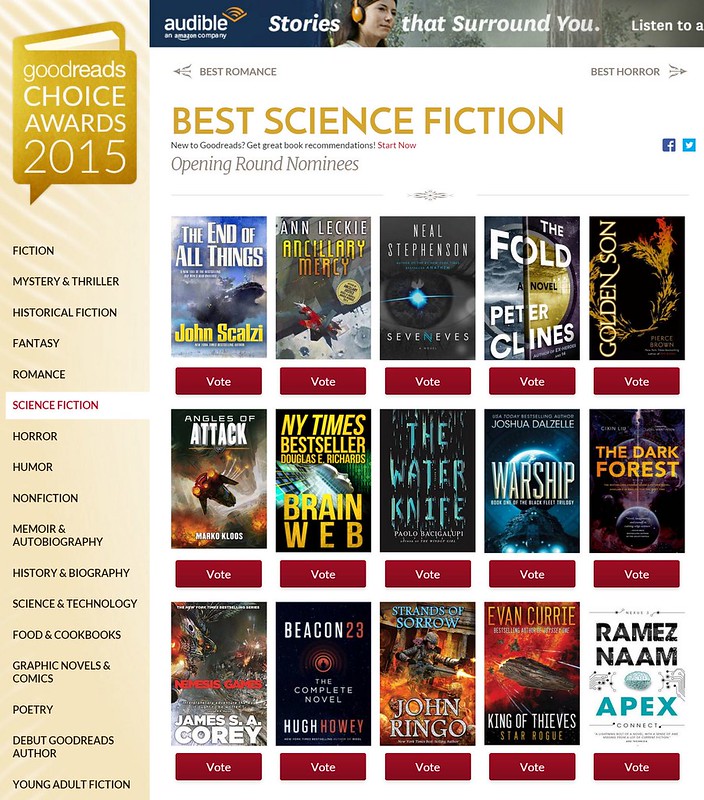 In the science fiction category, which should be obvious, and kind of nice. It’s there along with other excellent books from fine authors, as you can see above. It’s always nice to be nominated for this particular award, and last year in this category my book Lock In came in second, rather distantly behind The Martian, which was having a great year (just like it is this year, too. It’s nice to be Andy Weir right about now).

As always, my suggestion to you when it comes to voting is: Vote for the book you like, in this and any other category. Additionally, with this particular award, if the book you like isn’t on this initial list of fifteen for this round, you can write it in. Write-in nominees have made the second around of this award before, so it’s worth making the effort if you are so moved.

Here’s the link to the science fiction category. Happy voting! 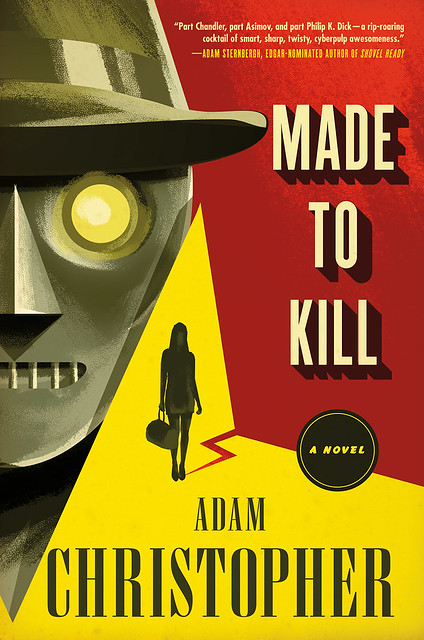 Adam Christopher has written a novel called Made to Kill, which features a robot private investigator in an alternate noir Los Angeles. Yep, that’ll do. Here he is to talk about how it all came together.

Ideas, as they say, come easy. Big ideas, small ideas; ideas that stand on their own, ideas that need to coalesce with others to make something new. Sometimes ideas are obvious, sometimes they are not.

And sometimes an idea will come, not out of nowhere, exactly, but out of something else entirely.

Like the idea of a robot hit man, working in 1960s Hollywood. An idea that became my new novel, Made to Kill—in fact, the idea that spawned a whole trio of books, The LA Trilogy.

A couple of years ago, I sold a scary space opera called The Burning Dark to Tor Books, and as part of joining that fine stable of authors, I was sent a big questionnaire to answer. There were dozens of questions, but I only had to pick a handful, which would then go up on Tor.com as a Pop Quiz at the End of the Universe, introducing me as a new Tor author.

As I read through the questions, one in particular intrigued me:

If you could find one previously undiscovered book by a non-living author, who would it be? Why?

Now, I’m a huge fan of Chandler. I love crime and mystery fiction, old and new, but I have a particular affinity for what might be called the golden age of popular fiction, a period roughly from the 1920s to the 1940s which saw the birth of superhero comics, classic pulp science fiction, and what we would recognize as the modern detective story. Incredibly, during this period’s peak, reading fiction magazines was the number one leisure activity among adults in the United States. Pulp magazines devoted to detective and science fiction sold in the millions, each and every month. And sure, while a lot of it was of, shall we say, dubious quality, they were imbued with a spirit of adventure and excitement and really wild things, and from the pulp magazines came many writers who would define entire genres: Arthur C. Clarke, Isaac Asimov, HP Lovecraft, Dashiell Hammett—and Raymond Chandler.

Chandler himself hated science fiction. Hated it. In 1953 he wrote to his agent, complaining about this genre—lamenting the fact that “they pay brisk money for this crap?”—and launching into a 150-word pastiche involving Aldebaran III, pink pretzels, and, amazingly, what appears to be a computer called Google. Of course, it’s pure nonsense, a throwaway to prove his point, but it’s Raymond Chandler nonsense. Even here, there is that rhythm, the cadence he is famous for.

If his agent ever answered, the reply has never been published. But it gave me a fun idea—clearly, secretly, Chandler really loved sci-fi. He sent that letter to fish for interest from his agent, having written a series of novels set in the near-future and starring a robot detective. Then he had a change of heart, and burned the manuscripts, not realizing that his housekeeper had saved them from the grate.
Raymond Chandler and robots. Wouldn’t that be pretty neat?

My editor, Paul Stevens, certainly thought so. Maybe he was joking, but when he read my questionnaire answers, he suggested that I write that long-lost Chandler story. I took him up on the challenge, and in July 2014, Tor.com published Brisk Money, a novelette with a title borrowed from Chandler’s 1953 letter, written in a hardboiled, first-person style. Honestly, I didn’t know writing could be that much fun.

But it was only while I was actually writing that novelette that I realized my little idea had turned into a big one. As the story progressed, it turned out—much to my own surprise—that the electronic hero of the story, Raymond Electromatic, wasn’t really a robot detective.

He was a robot assassin.

In Brisk Money, we discover that while Ray is programmed to be a private eye, his supercomputer controller, Ada, has another idea. Ada’s prime directive is to generate a profit… and she works out that Ray can use his skills more lucratively as a hit man than as a gumshoe.

Suddenly, I had a whole new world waiting to be explored. This was 60’s Los Angeles, but in a skewed version of reality where the robot revolution had come and gone a decade earlier—mostly because people didn’t like robots, and certainly didn’t like them taking their jobs. As the last robot left, Ray uses the Electromatic Detective Agency as a front to hide his real work, knocking off people for, as they say, brisk money.

Except his activities have not gone entirely unnoticed…

From nowhere, I had not just a novelette, I had a whole novel—no, I had three novels. Brisk Money posed so many questions—what happened to the other robots? Why was the robot program really cancelled? What else is different in this world? And who are the agents tracking Ray’s every move?

Those were questions I was just desperate to know the answers to—and so did my editor. Without quite realizing it, I’d written a novelette and I found myself with a whole trilogy of novels, the first of which is Made to Kill. From out of nowhere, I had two characters—Ray and Ada—who had suddenly come to life, characters I fell in love with and I just knew I had to write more about.

Writing is a strange business—you can plan, you can set goals, have ambitions, work hard to achieve them. And sometimes that hard work pays off in ways you just don’t expect.

Like when a fun, throwaway answer to a standard pop quiz questions turns into a whole new adventure and a whole new world.