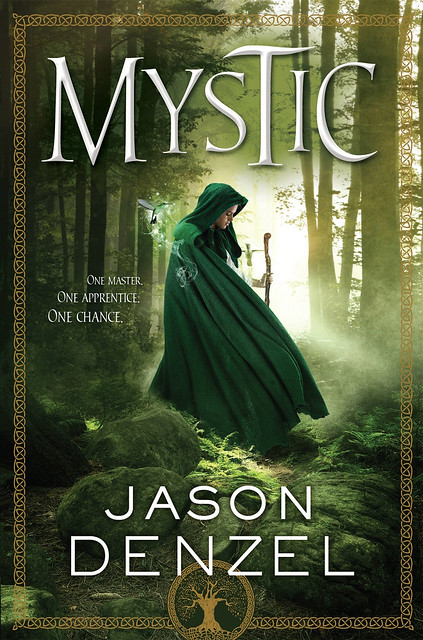 In this Big Idea piece for Mystic, author Jason Denzel is about to tell you more about martial arts origin stories than you probably already knew. But don’t worry, it’s going somewhere — specifically, it’s going to tell you how his novel came about.

The Big Idea behind my debut novel, Mystic, is lineages.

I know kung-fu. Or, more accurately, I study and practice Chinese martial arts. I was fortunate enough in my adult life to come across a studio in my hometown that focuses on a traditional form of Choy Li Fut, a very traditional form kung-fu. One of the first things you do as a student at this studio is to learn the names of the past masters, and the origin story of the system. Here’s how the origin story goes:

In nineteenth century China, a kid named Chan Heung learned Shaolin-style kung-fu from his uncle, Chan Yuen-Woo. By age fifteen, Chan Heung could defeat anybody in his village or the the neighboring ones. When he turned seventeen, his uncle, who could teach him no more, sent him to learn from from his own former master, Li Yau-San.  Young Chan Heung spent four more years soaking it up, quickly learning everything Li Yau-San could throw at him.

Amazed at the prodigy on his hands, the master sent Chan Heun to his former master, a man named Choy Fook, but better known as the Scarred Monk. But there were a few problems with this: first, nobody knew exactly where this master, the Scarred Monk, lived. And on top of that, local legend claimed he no longer taught kung-fu, having given it up for a life of solitude and meditation. Well, as you can imagine, Chan Heung had all sorts of great adventures tracking down his third master, and when he finally did, he had to do all the crazy things to convince him that he was a worthy student.

He succeeded in the end, and later in life he returned home and merged all he had learned into a new system, which he named for his three masters: Choy Fook, Li Yau-San, and his uncle Chan Yuen-Woo. The system lives on today: Choy-Li-Fut.  (His uncle insisted he not use his name in labeling his new martial arts system. So instead, Chan Heung used the term “Fut”, which is an honorific term for the Buddha.)

Stories like this fascinate me. The origin of Wing Chun–the kung-fu style Bruce Lee learned–is another good one. It’s named for a woman who learned the arts from another woman in order to defend herself from an especially douchey warlord. Even the legendary founders of the original kung-fu… the masters from pre-recorded history… are said to have originated in India, where they lived as reclusive monks in caves and meditated until the knowledge just came to them. These masters supposedly walked off their mountains, saw a need for teaching people, and decided to share their wisdom of self defense. So today, thousands of years later, here I am learning those same lessons every Wednesday and Friday night at a studio at my local stip mall.

Mystic is my take on telling a story similar to Chan Heung’s, or Wing Chun’s. Specifically, it’s about a young girl who defies her family, her society, and her culture’s traditions, to seek out and attempt to become an apprentice to the High Mystic living in the nearby woods. The book contain some familiar tropes you might expect from an apprentice tale, but it also has plenty of incident and unexpected happenings. For the setting, I chose a fantasy world that mixes Celtic and Indian traditions because they represent an interesting balance of Western and Eastern mystical ideas.

To be clear: this isn’t a kung-fu novel. Pomella, the protagonist, couldn’t throw a punch to save her life. (In fact, there are a few instances in her story where she’d benefit from knowing how to toss a good jab.) In place of martial arts, Pomella is seeking to learn to use the Myst, a pervasive energy that exists in all times and places. It’s a little like the Force, if you know what I mean.

Even though Mystic is classified as epic fantasy, the scale is intentionally limited. There are no marching armies. The fate of the world is not at stake. Instead, this is about a young girl having the courage to follow her dream. It’s about her seeking the master her heart is calling for so that she can fulfill the potential she knows she contains. There are stakes and consequences, but this particular novel won’t threaten all of this fantasy world’s existence.

I believe stories like this are worth sharing. The ideas behind them are timeless in a way. You can be the judge of whether you think Mystic is worthy of inclusion in that category. It’ll be followed up by two sequels: Mystic Dragon, and Mystic Skies. Perhaps those later books will contain marching armies and grander stakes. But one thing I will guarantee is that the entire trilogy will be filled with holy mountains, powerful masters, eager apprentices, and… okay, fine… maybe just a little bit of good ol’ kung-fu action now and then.

The past masters would be proud.