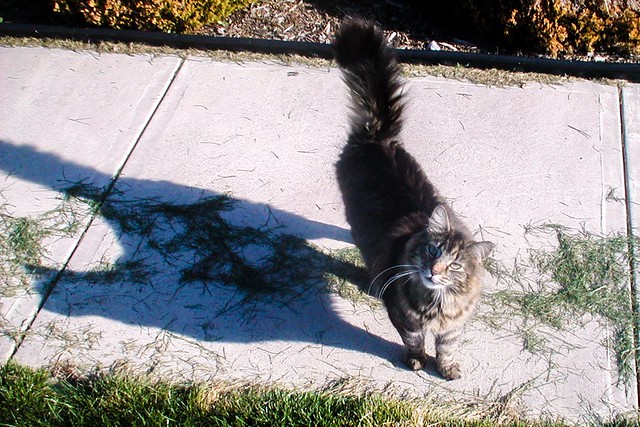 This is the first picture I ever took of Lopsided Cat, back in April of 2003. He came to us in an interesting way: Krissy and Athena were working in the garden (well, Krissy was working, Athena, age four, was “helping”), and Lopsided Cat emerged out of the trees at the property line and made a beeline to Athena. When Athena bent down to pet this friendly, strange cat, he hopped onto her back. And just like that, he was home.

Well, part-time at first. I suspect Lopsided Cat, who appeared well-fed and who was neutered, was someone else’s cat too, possibly one of our neighbors to the east. Alternately, as happened with Zeus, someone abandoned him, and Lopsided Cat, an able hunter, had been taking care of himself until he found himself an easier situation. But at some point he decided he liked us and made us his permanent base of operations. We were fine with that because he was friendly and affectionate, unlike our then-current cat Rex, who liked me but was a jerk with everyone else.

Lopsided Cat’s name came from the fact that he usually had his head at a tilt, which was visually endearing but was rooted in an actual malady — when he came to us he had a rather substantial infestation of ear mites (this alone suggests he might have been abandoned), and this apparently caused him to tilt his head a lot. We got the ear mites cleaned out and otherwise got him shots and so on, but he never stopped tilting his head. When he was a part-time resident, I called him “that lopsided cat.” When he came on-staff full time, the name stuck. It suited him.

Lopsided Cat came to live with us, but he was and remained through his life a mostly outdoor cat. He would come in to eat and sleep and have occasional pettings, but when he was done with all that he let you know that he was ready to outside with a meow loud and insistent enough to cut through concrete. I’ve read that cats meow in a vocal range similar to that of human infants, because that’s what makes adult humans get up and make the problem stop. I’m willing to believe it because I would be dead asleep, and Lopsided Cat would meow on the porch on the other side of the front door, down a flight of stairs, and I would be awake instantly and up out of bed before I had time to think about it. I suspect he was pretty proud at how well he trained his human.

He earned his keep and then some. I’ve noted before that our cats are not just pets but are working animals — we have agricultural fields on three sides of us and the creatures that live in the fields like to migrate into the house, particularly when the weather starts getting cooler. The cats kept that from happening, Lopsided Cat most of all. He was an avid hunter, and at times would do it with… well, style might be the word for it. One morning I went into the garage and found two dead rabbits, symmetrically arranged facing each other, paws up as if praying for their lives, on the mat by the door, and Lopsided Cat sitting there, looking up at me. My immediate thought was holy shit, it’s a gangland killing.

For all that, he was not a standoffish cat. He liked to be petted — although not in front of the other cats, which is a thing I found very amusing — and he was never skittish with the other animals, including the dogs, both of which during his tenure, Kodi and Daisy, outweighed and outsized him by a significant factor. He was cordial if not overly friendly with both. His closest animal relationship was with Zeus, whom he initially disliked but eventually took to engaging in mutual grooming behavior with. This made me joke that he and Zeus were gay, which, I should note, was perfectly fine with me if they were. 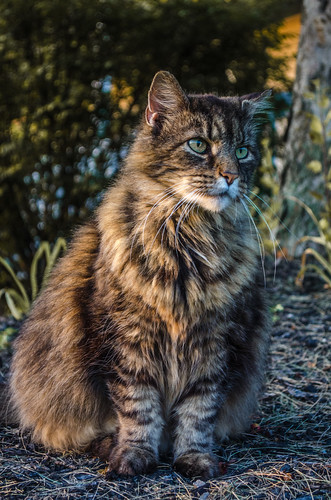 Of all the cats we’ve had, Lopsided Cat struck me as the most Platonically ideal. Ghlaghghee was a princess, Zeus was a hyper bundle, Rex was a curmudgeon, but Lopsided Cat was a cat: He ate and slept and hunted and accepted tribute from humans in the form of petting and that’s what he was. Of all the cats I’ve had, I expect he was the least smart; he never did anything that made me think wow, that was actually pretty clever, which every other cat I’ve ever had has done at least once. But then he never had to. This was a creature who was perfectly and utterly at peace with who he was: A cat. You could not ask for a better one.

The other evening — on the same day as we picked out our new kittens, currently named Thing One and Thing Two — Krissy found Lopsided Cat in the garage, looking rather disheveled and dazed. He had slobber on him, which suggested he’d been in a fight with a local dog, but didn’t have any bite or claw marks on him, which suggested that the fight had been lopsided in favor of the cat. Nevertheless we took him to the vet to see if there were any broken bones (there weren’t) or anything dislocated (again, no). The vet kept him overnight, then gave him painkillers and let me take him home, and I thought that would be the end of it.

It wasn’t. Lopsided Cat, always a very active animal, didn’t want to move and didn’t want to eat or drink. We waited to see if he would get better and when he didn’t I took him back to the vet for some more x-rays and other tests. Our vet, this time looking for things other than broken or dislocated bones, discovered that our cat had suffered a hernia, probably from the fight. That explained why he didn’t want to move or eat. She also discovered that Lopsided Cat was suffering from kidney failure — and that was something that was independent of the fight, likely brought about from the fact that Lopsided Cat, who was at least a couple of years old when he joined up with us, was simply just now old.

So here was the thing: Our vet could operate on the hernia, but Lopsided Cat’s recovery was not assured to be smooth because of his age, and the fact of the matter was that no matter what, the state of his kidneys meant that the time he had left with us was short. The cat we knew and loved was active and spent most of his time outdoors. The cat we would have left to us would be invalid and failing. We had to ask ourselves whether Lopsided Cat would be happy not being the cat he had always been.

Each of us, Athena and Krissy and I, knew the answer to that. So yesterday all of us went to the vet’s office to say goodbye to him. Then, when that was done, we brought him home to bury him.

Which, I have to be honest, I never thought we would be able to do. Lopsided Cat came to us out of the trees, unexpected. He was an outdoor cat, and one that was never shy of a hunt or of a fight. For those reasons, I fully expected that one day he would simply go out on his daily rounds… and that would be that. We would wait, and wait, and wonder and be concerned and then after a month or two we would have to accept that the cat who came out of trees had gone back into them, forever, and that we would never get to give him our farewells and let him know he loved him.

But he didn’t do that. In the end, he went out on his daily rounds… and then he came back. Because in the end he knew where his home was. It was with us. He came back to us, and we got to give him our farewells and let him know we loved him. And then we got to bring him home one last time, to be with us forever.

I’m so glad he came home. 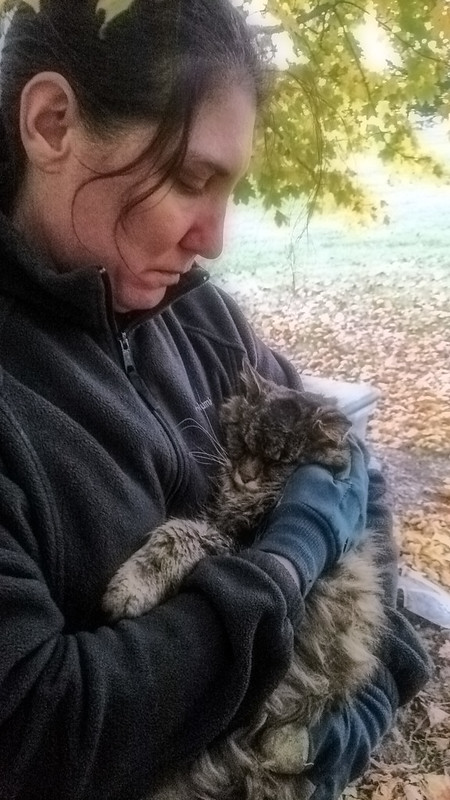