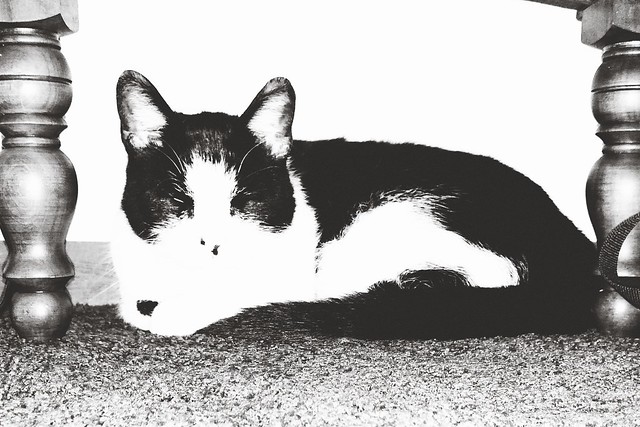 One, he’s perfectly fine, merely not at the center of my public discussion of cats in the last week as he neither a) a kitten, b) a newly-passed on senior cat. You should be aware that Zeus has been perfectly fine not being the center of media attention in the last several days, as he is a cat and has not the slightest idea either that I write about my cats here, or that any of you have any idea who he is. But he is alive and well and doing what he does.

Two, he seems to be aware that that Lopsided Cat is gone. He saw his friend in his last few days and appeared to grok that not was well; he did not see Lopsided Cat after we brought him back from the vet and before we buried him (he was out of the house at the time), but seems to note the absence, in the way pets do (Daisy saw Lopsided Cat as we buried him and at least appeared to have some idea of what was going on). He seems to be carrying on all right. Zeus and Lopsided Cat were close, but Zeus and Daisy are closer, and I suspect Zeus will miss Daisy most when she’s gone.

Three, Zeus is aware of the kittens and as a somewhat territorial male cat (“somewhat” because he’s been snipped) is less than thoroughly pleased at the turn of events, first because the kittens are mostly sequestered to my office right now, i.e., his space — he likes to nap on my chair — and second because pets are rarely thrilled with change anyway. Every time Zeus sees the kittens, his response is basically to give a look that says “the fuck are those,” and then stalk off. Now, as it happens, Lopsided Cat and Ghlaghghee had exactly the same reaction to him when he arrived, nearly eight years ago now. So in the long run I suspect things will be fine.

It’s mildly weird to think of Zeus as the senior cat now, as I remember his arrival and his subsequent rather extended adolescent phase; it’s really only in the last couple of years that it’s sunk in that he’s a fully adult cat. But he’s eight years old now, which are prime adult years for a cat. We weren’t expecting him to be the senior cat at the Scalzi Compound, but now he is — senior pet, in fact, as his tenure with us outdates Daisy’s by a couple of years. I think he’ll do well in the role.

15 thoughts on “For Those of You Asking About Zeus”