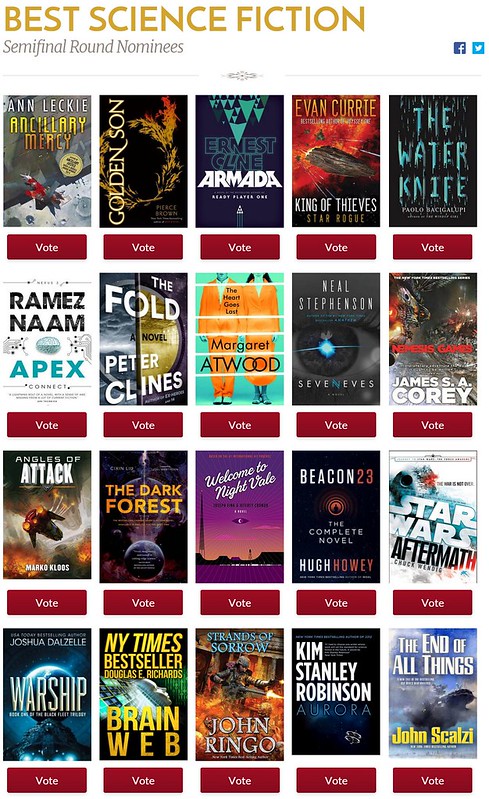 First: Hey, The End of All Things made it to the semifinalist round of this years Goodreads Choice Awards in the science fiction category. You can see a picture of the other semi-finalists above, which include a few write-ins from the previous round, which is all to the good. If you’re a Goodreads member, you can vote for the book you like in this category and several others as well. Here’s a direct link to the science fiction category; you can click through to the other categories from there.

Second: Someone asked me if being nominated for things like this made me feel competitive against the other authors in my category, not in the least because the Goodreads people are more than happy to try to get you as an author to engage your readers to vote for you through the various rounds.

In this specific case, the short answer is no, because a) the Goodreads Choice Award is not an award that means a huge amount to me — it’d be nice to win, sure, but any time I’ve been nominated I’ve thought about the award for exactly zero seconds after someone else’s book beat mine, and b) there are a lot of authors in the category I like as people and/or books I’ve enjoyed, and it’s genuinely difficult for me to feel competitive against them. I’d be delighted for almost all of these books/authors to win, excepting only the books I’ve not read by authors I don’t know, and I’d be perfectly happy for them to win, too, because why not? There’s also c) which is: Why be the asshole who has to feel competitive all the time, or feel that you’re owed an award? That’s kind of exhausting, and annoying to others. I’d prefer not to.

In a larger sense: You know, I’ve won my fair share of awards and have also lost rather more than I’ve won. In all cases my experience has been that it’s nice to win but it also doesn’t usually hurt to lose. The worst-case scenario to losing an award is that you are no worse off than you were before, unless you’ve made winning that particular award a cornerstone of your being for some reason or another, which is on you rather than anyone else. You might believe if you win an award, then it will move the needle in how you are perceived or are respected, and you know what? It just might. Then again it might not. Or it might for a limited time, after which you’re in the mix again just like everybody else. Or after you win it you might start acting like a twit, or might start worrying that you always have to top the thing that won the award. In which case the winning the award will become a net negative over time.

I’ve won and lost enough awards to know an award is not The Thing That Changes Everything. An award is fun, an award is nice, an award may even be, at times, significant. But at the end of the day, whether you win or lose, you still go home with yourself, and you don’t change — at least, not because of an award. It’s perfectly fine to want an award (I’ve wanted them from time to time, you can be assured) and it’s perfectly okay to be disappointed if you don’t get one. But ultimately, putting the responsibility for your happiness onto an award, which is, generally speaking, a thing over which you have absolutely no control, is a very fine way to become unhappy. Which will not be on the award, or any of the people who voted for it. It will be on you, whether you want to own that fact or not.

What I suggest is this: Hey, you’ve been nominated for an award? Cool! You’ve made the semi-finalist round? Neat! Made the finalist round? Awesome! You win the award? Whoo-hoo! You lose the award or didn’t get nominated this time around? Oh, well, your life is still probably pretty decent, all things considered. Maybe next time! And so on.

In the meantime, be happy for the success you have and also for the successes others have, which in point of fact do not diminish the opportunities and success you may find. Envy and jealousy and a zero-sum approach to awards is no way to go through life, my friends. 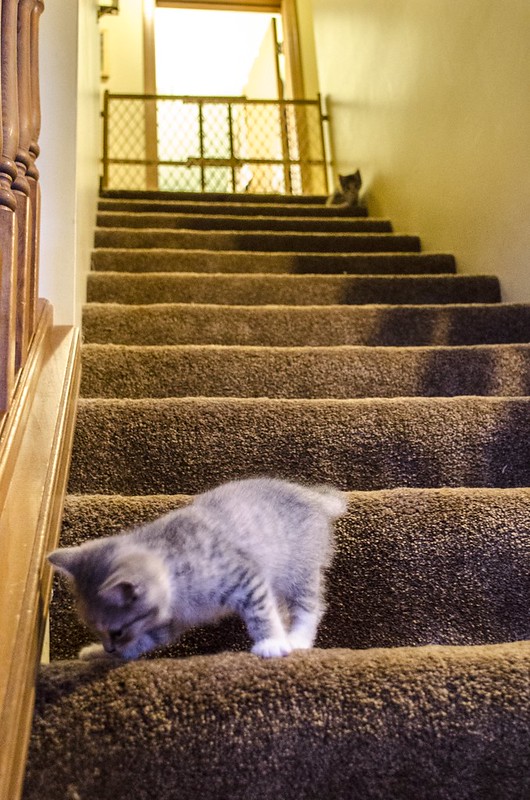 The kittens are on this side of the stairs because they both climbed over the gate, evidence that the gate is not so much useful as a gate anymore, even if it has some continued utility as exercise equipment. That, combined with the fact that the last flea combing produced no fleas (aided by a spraying with age-appropriate flea treatment, which will be administered again probably tomorrow), means that I’m officially letting the gate come down and the kittens to roam around the house. They’ve already gotten acclimated to Daisy, who loves them to bits, and it’s time they had a little more contact with Zeus, who so far is less than pleased but need to deal with it. So out into the world (defined as “the house”) they go.

I do find the kittens already surprise me. When we got them, lo that whole week ago, I assumed that Thing Two, who is the larger and in many ways more forward of the kittens, would be the troublemaker of the pair, but it turns out that Thing One is the adventurous one — she’s the one who hopped the gate first, who acclimated to Daisy first, and who goes down the stairs at every available opportunity. Thing Two, on the other hand, is a little more cautious (but only a little) and is more openly affectionate, coming over to me meowing to be picked up and petted and so on. It’s nice they are already challenging assumptions and expectations.

This is likely the last regularly-scheduled kitten update here. Before anyone complains, if you think this means there won’t be additional kitten pictures here, quite obviously you’ve never actually visited this site before. There will be tons, I assure you. Just not every single day. 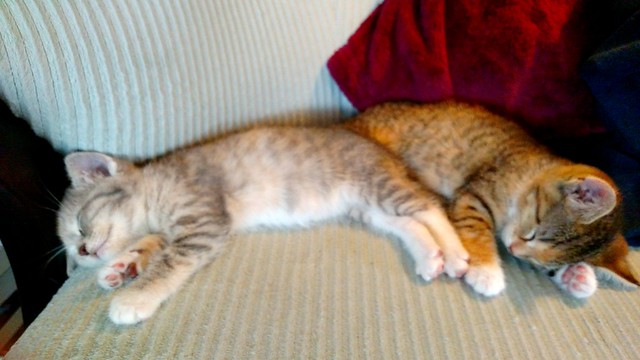 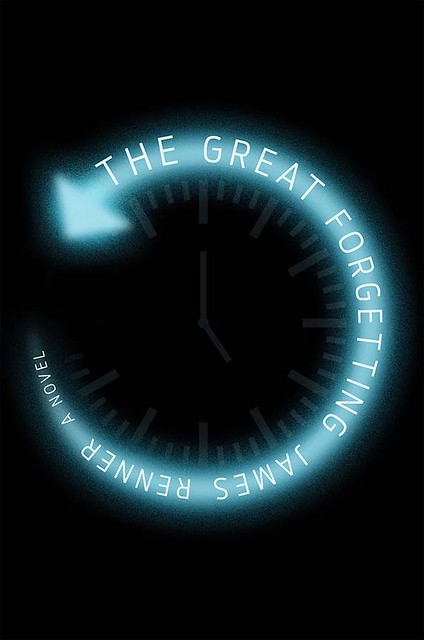 I’ve forgotten what I was going to say to introduce James Renner’s new novel. As the novel is called The Great Forgetting, perhaps this is appropriate. And did I really forget… or was I made to forget?

When I was a kid my father would take me camping at state parks around Ohio. Salt Fork. Pymatuning. Mohican. If you’ve never been, these parks all pretty much look the same: stark, concrete buildings for bathing and gutting fish in the middle of old-growth forests. I asked my dad, once, when the parks were built and he said after the war, meaning World War II.

But the parks looked older to me. I imagined they were hundreds, thousands of years old and that we had only forgotten when they were really constructed.

In college, I learned of a theory called “Phantom Time.”

The idea behind Phantom Time is that, at various moments in history, our great leaders rejiggered the calendar for their personal agendas. Some scholars believe Pope Sylvester II skipped over a hundred years in the official calendar just so that he could be Pope in 1000 A.D. A German historian, Heribert Illig, is convinced much of the Middle Ages never happened at all, specifically the years 614  – 911.

How crazy is that?

We assume the year is 2015. But if we skipped over hundreds of years because someone altered the official calendar, perhaps it’s only 1772. How about this – what if they didn’t always just skip ahead? What if some ruler in the distant past simply deleted historical record? An unaccounted for span of time. Perhaps it’s not 1772. Perhaps it’s really 2115.

It’s enough to make you paranoid, isn’t it?

That idea was the seed for my new novel, The Great Forgetting. In the book, I imagined a world in which the United States turned its back on Europe in World War II. The war was much bigger than what we were told, and raged on until 1964, when we finally defeated the Werhmacht as they pushed into New England. Billions died.

As America began to rebuild, a scientist came forward with an idea: we could forget that we let the Nazis win, if we really wanted to. A new history could be written. And we could reset the calendar. He had this idea for a giant machine that could rewrite our minds to accept a new, shared history in which we were heroes. That initiative was known as The Great Forgetting. We scrubbed 100 years of history from our records.

Eventually, a history teacher from Ohio uncovers the conspiracy. And he is faced with a choice: is it better to forget our mistakes or learn from them so that they’re never repeated?

It’s a heady idea. And maybe not so far fetched.

After all, who wouldn’t want to forget their worst mistake? And how powerful is that urge when it’s an entire country?