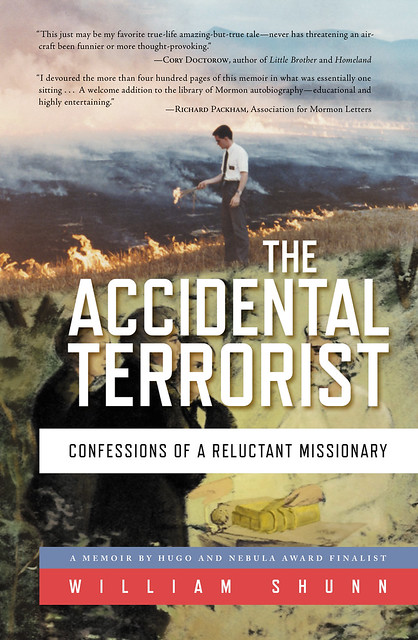 Author William Shunn has had something happen to him which it seems unlikely has ever happened to you, and that event is the cornerstone of his memoir, The Accidental Terrorist. But as Shunn learned, telling the story of that event was not merely a matter of reciting the facts.

I was arrested in 1987, when I was a nineteen-year-old Mormon missionary.

In Canada, of all places.

But even before that happened, I had the big idea to write about what it’s really like to be a missionary.

We probably all picture Mormon missionaries as an army of interchangeable young men in white shirts and ties, trudging endlessly from one porch to the next with a message and a holy book. Even growing up Mormon, this was pretty much how I envisioned mission life. It wasn’t until I turned nineteen and was pressed into service myself that I discovered a more colorful reality.

The missionaries I met were anything but homogeneous, and frequently anything but holy. Some were diligent and some were slackers. Some were pious, sure, but more were profane. There was gossip and brownnosing and backstabbing galore. A few of my colleagues seemed to be set on breaking every rule in our little white handbook, not mention a Commandment or two.

I was something of a sheltered kid up to this point, but I was also a budding science fiction writer. I’d attended the Clarion Workshop at Michigan State University only a year earlier. My reaction to the absurd truth of mission life was, inevitably, an intense desire to write about it.

What’s more, I wanted to write about it not in some roundabout, science-fictional way but as a straight first-person memoir. The missionary world would be alien enough to most readers to be interesting all on its own. Taking mental notes for my tell-all book was one of the ways I kept myself sane.

As I said, this was my big idea even before the ill-considered incident that landed me in jail. After I was free again, with a better story than I’d ever imagined, I was all the more eager to get my book underway. But as a faithful young Mormon, every time I tried to start it my worries about church discipline got in the way. After all, the memoir I envisioned wouldn’t exactly be a faith-promoting exercise.

It wasn’t until I was no longer so young and no longer so Mormon that I was finally able to get moving on a first draft of The Accidental Terrorist. The year was 1999. I set myself some ground rules. First, I couldn’t make anything up. Second, I couldn’t go out of my way to make myself look good. Third, I couldn’t poke fun at my younger self, no matter how stupidly I might think I’d behaved as a kid.

As a further challenge, I had to weave enough Mormon history and doctrine into the story that my criminal act would make sense, and not come across as the bad punchline to a worse joke. That’s what led directly to my next big idea—to braid my narrative together with the life story of Joseph Smith, Mormonism’s larger-than-life founding prophet.

It’s tough to explain Mormonism without explaining Joseph Smith. It took a huge infusion of bravado to think I could even try, or that I could put our stories side-by-side without his overwhelming mine. It took even more chutzpah to draw parallels between our two lives, and to think that my experiences could illuminate his as much as his illuminated mine.

That was hard to pull off, but one thing was even harder—writing about myself with sufficient insight and compassion. Despite my best efforts, my earliest drafts dripped with condescension. I managed to write that out in later drafts, but my younger self was still often the butt of the joke. Real understanding continued to elude me.

It took sixteen years and the right editor to get me over that final hump. (A lot of therapy, too—any writer’s best friend.) My editor asked me all the tough, probing questions about emotions and motivations and expectations that I wasn’t sure how to ask myself. This was the spool of thread she armed me with before shoving me into the labyrinth to bring back some warm, bleeding answers.

Two drafts and six months later, we were both satisfied with the result. I’m glad I finally found the words to portray young Elder Shunn in an empathetic light because I owe that kid a lot. Beyond the obvious, he left me one foresightful gift which I only discovered as time was running out to choose a photograph for the book cover.

I stumbled across it while sifting through a box of mission mementos—a photograph of me in a white shirt, tie, and black missionary name tag. I’m posed at the edge of a burning wheat field, deep in thought. I hold a sheaf of tinder in my hand, as if I’ve just set the fire myself.

I’d forgotten this photo existed, but it was the perfect metaphor for my story. Looking at it, I got the eerie feeling that my younger self had been thinking ahead to this very moment and had sent me exactly what I needed.