How You Should Vote for the Final Round of the 2015 Goodreads Choice Awards, SF Category 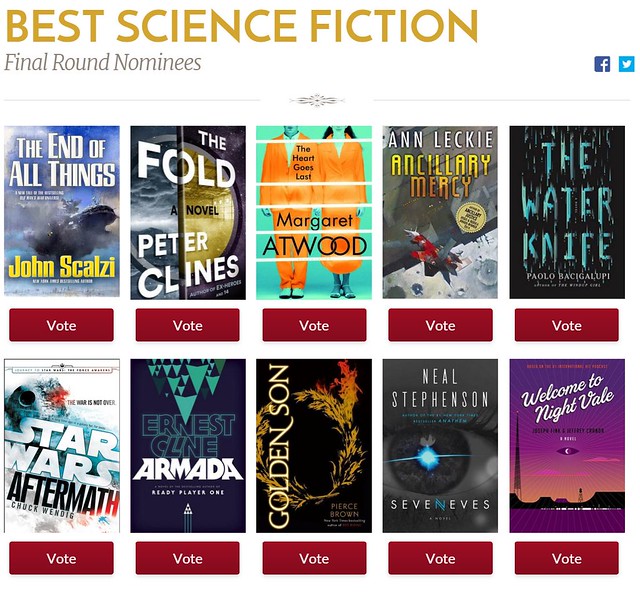 Oh, look, The End of All Things has made the final round of the Goodreads Choice Awards this year, along with nine other books in the science fiction category. How excellent, and thank you to everyone who has voted so far. Now the question becomes: What should you vote for in this final round?

Well, let me tell you.

You should vote for Ancillary Mercy because Ann Leckie has stuck the dismount on what is one of the defining science fiction series of the century so far.

You should vote for Armada because in your heart you always wanted to be recruited for the space forces, fighting aliens.

You should vote for The Fold because teleportation is cool, and what Peter Clines does with it here is even cooler.

You should vote for Golden Son because class struggle! And also because some people think this second book in the Red Rising series is even better than the first.

You should vote for The Heart Goes Last because Margaret Atwood takes the metaphor of work as a prison and punts it into the stratosphere, as she would.

You should vote for Seveneves because Neal Stephenson ends the world and then seems to enjoy the hell out of himself trying in the most difficult way possible to bring it back.

You should vote for Star Wars: Aftermath because it’s one of the best Star Wars novels yet, and it annoys whiny bigots as well, which is its own special reward.

You should vote for The Water Knife because if we’re not careful, this is where we’re going to be living in a couple of decades (or sooner).

You should vote for Welcome to Night Vale because it’s a mash-up of Our Town and The Twilight Zone, and if you can’t love that, you may be dead inside. The bad kind of dead, not like… well.

So, yes. That’s how you should vote for the Goodreads Choice Awards in the science fiction category this year. I hope that helps!

← The Big Idea: Matt Mikalatos
In Which The Doubleclicks Tell You What an Awful Person I Am — In Song! →

48 Comments on “How You Should Vote for the Final Round of the 2015 Goodreads Choice Awards, SF Category”