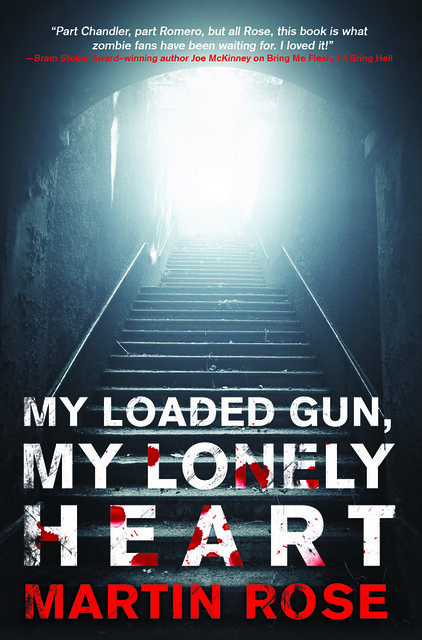 The politics of modern life are difficult. Are they more difficult when monsters are thrown into the mix? For the answer to that question, we turn to Martin Rose, and My Loaded Gun, My Lonely Heart.

On the surface, My Loaded Gun, My Lonely Heart looks and seems like carefree pulp, disguised in the antique tropes of noir – complete with angst ridden anti-hero, the rabbit hole of conspiracy, the stock serial killer, and the shadow villain who must be stopped for the sake of humanity.

But I have played a wicked trick, dear Reader. Beneath the camouflage of My Loaded Gun, My Lonely Heart lurks a bigger idea, buried in the background – the corrosive effects of corruption and violence, and what these twin forces do to ordinary people. This idea lives and breathes in Vitus’s character as its most prominent form – a reformed zombie turned human. It is through the corruption of his governmental family that he is killed and remade into terrible shapes.

The monsters that populate my books are not supernatural forces that defy explanation, or exist in a vacuum we can shrug away as being “the way things are.” Instead, I struck upon the idea of monsters being man-made, an allegory for what nations do to otherwise good people when their violence becomes institutionalized and every day people become oppressed in the extreme, (such as political prisoners) from the old Soviet Union, to the recent Arab Spring and events in Egypt, to the United States and our policies involving rendition and torture.

When we draw citizens into a dragnet and punish them, we create monsters. We create them through violence and oppression, with an official seal of approval. The effect of covert government policies designed to maintain imperial power is a poisoning of the population at large – explicitly referenced by my opening quote from Chalmers Johnson, in which he explains the term we are all coming to know as “blowback.”

It seems there are few subjects so taboo as politics. Yet, people happily talk about monsters and superheroes on television and the movies. Here, the ground is rife with politics, disguised as mere entertainment. And after all, we need places where we can hang our hats and dream a little without worries dogging our every waking hour. The playground of story and imagination has always been a time-tested place to approach topics often too controversial to speak of in other environments. If anything, we love to talk politics – as long as we don’t know we are. In this way, we preserve polite company, but overlook the cost – a human cost in which we fail to look our monsters in the face and recognize they were once human – and we could easily be them, but for a twist of fate.

Writing that very quality is the hardest part. I tasked myself to make clear that the victims in my story are often accidental. They did not sin, they did not deserve the life they stumbled into. Villains come in degrees – we might know who pulled the trigger, but not who ordered the hit. Degrees of responsibility also come into play as I tried to make clear that we often find ourselves in untenable situations, held hostage by good intentions, by love and hope, only to have these qualities double back and bite us. We are all born with these potentials; and my characters explore them, striving to come to terms with the schism that exists between reality and desire.

Nothing is simple, everything is complex. The monsters are attempting to survive in a world that has betrayed them. The figures of authority are corrupted sociopaths, more dangerous than the monsters they created, and in between stands Vitus, who must make the hardest journey of all – to take an ethical accounting of himself, and come to realize the people he trusted are mere frauds, and those he felt certain were his adversaries, might be the only ones worth saving. Most of all, to look inside oneself and have the courage to recognize where one has failed and must martial the strength to do better.

It is not an accident, that in this installment, Vitus is restored to human form in the depths of a prison cell – we start from the humblest beginnings, and endeavor to climb through and journey back to the qualities that make us human – the sensitivity of feeling, the rediscovery of kindness, the vulnerability that is intrinsic to occupying a fragile, human body, and caring for others more than we care for ourselves.

While I make it clear that his biology plays an integral part in this process, being in a human body isn’t enough to qualify alone. It’s how he reacts to his environment – and how he treats it with more consideration, to care more for the people around him and learn to think of them first before himself, to understand fundamental empathy, even for those he must bring to justice – demonstrates his return to a human-centered space. And while he is far from perfect, he is ever learning.

← An Announcement Regarding Award Consideration for 2015 Work of Mine
Frightened, Ignorant and Cowardly is No Way to Go Through Life, Son →